A closer look at satellite images taken after the blast. 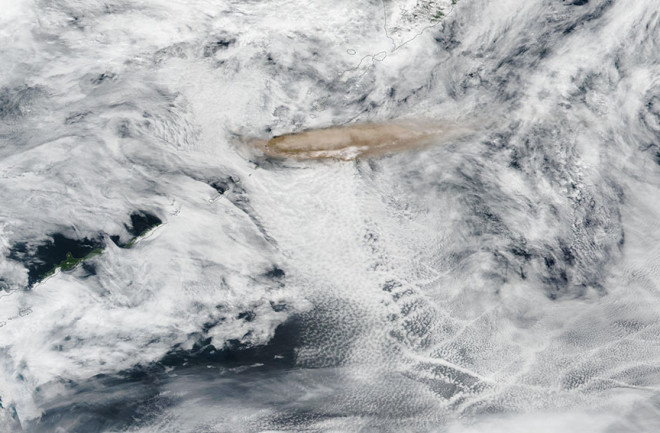 It has been awhile since we’ve had an unexpected eruption, but last night Raikoke in the Kuril Islands off Russia had an impressive explosion. Most people (and volcanologists) are likely unfamiliar with this remote volcano and rightly so — only ~140 people live within 100 kilometers and the last known eruption was in 1924. However, the last two eruptions (1924 and 1778) were both VEI 4 events.

The new eruption sent a brown plume of volcanic ash through the white cloud deck. Estimates for the plume height from the Tokyo VAAC are ~13 kilometers (43,000 feet) spreading almost due east. This means that the eruption is likely prompting diversions for aircraft traveling between North America/Europe and Asia.

Himawari-8 captured the growing plume in true color as the eruption commenced (above) as a sequence of smaller blast followed by the big one. You also can watch a sequence from NOAA that shows the growing ash plume as the eruption started. VolcanoDiscovery posted images of the eruption seen from satellite where the roiling clouds of ash can be clearly seen. I grabbed an image taken by the Suomi NPP/VIIRS satellite showing that impressive ash plume. Initial estimates see a significant input of sulfur dioxide into the atmosphere as well (for such a short blast).

Looking at the Tokyo VAAC reports and weather satellite images, it looks like the eruption has waned since the initial blast. Thanks to its remote location, there isn’t a lot of monitoring (or anything) near the volcano, but our ability to monitor volcanoes remotely allow us watch if the eruption changes, including those great satellite images and other information like lightning strikes caused by the ash.