A massive explosive eruption from Semeru in Indonesia produced pyroclastic flows and ash fall that has killed over a dozen people. 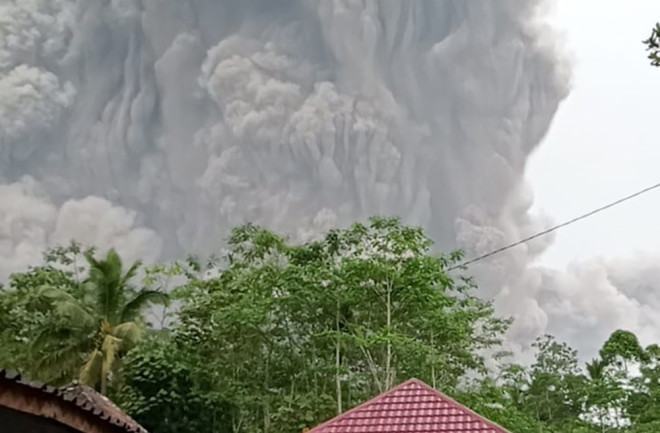 An unexpectedly large explosive eruption from one of the largest Indonesia volcanoes has ended killing over a dozen people after pyroclastic flows roared down the mountain's slopes. Located on the Indonesia island of Java, Semeru has been erupting for almost 8 years now, but on December 4 the volcano unleashed a blast that reached over 50,000 feet (15 kilometers) when the lava dome at the summit likely collapsed due to heavy rains. Some of the footage from the minutes after the eruption are truly startling as people raced to escape the hot ash flows.

This eruption appears to come out of nowhere according to Indonesian officials. Although the volcano has been erupting off and on since 2014, Semeru had not been showing sharp increases in earthquakes that usually accompany new magma and eruptions. However, the heavy rains falling on the precarious lava dome at the summit likely caused the dome to collapse. This, in essence, is like uncorking a champagne bottle, causing bubbles to form in the magma so rapidly that an explosion ensued.

Ash and debris coating the landscape near Semeru in Indonesia after the December 4, 2021 eruption. Credit: BNPB Indonesia

The images of the area around Semeru show deep ash deposits, likely from either the direct ash fall from the blast or pyroclastic flows that raced down the volcano. These flows of ash, debris and hot volcanic gases can quickly bury the landscape, wiping out buildings, vegetation and people. (As an aside, ignore the reports of "lava flows" -- there were likely none involved in this, although translation from local language has confused mudflows and lava flows in the past).

Swaths of forest near Semeru were destroyed by the December 4, 2021 eruption. Credit: BNPB Indonesia.

Over 8,000 people live within 6 miles (10 kilometers) of the volcano and over one million within 18 miles (30 kilometers), so without much warning to evacuate, the potential for loss of life is high. Many villages near the volcano were inundated by the pyroclastic flows and lahars (volcanic mudflows) created by the mixing ash and rain. People near the volcano filmed the chaos as they attempted to flee the area as well.

There is some speculation that the ash plume from this eruption may have been caused by a phenomenon called a "phoenix cloud". This is when the ash and gases from the pyroclastics start moving upwards after it has deposited all the heavy debris in the flow. This can lead to ash plumes that are very wet and cold compared to one made by a direct blast into the atmosphere.

Dozens of people are still being reported as missing and rescue workers are dealing with thick ash and poor weather in their attempts to find survivors. Thousands of buildings were damaged by the eruption as well, mainly due to collapsed roofs from ash and the mudflows/pyroclastic flows. Over 1,000 people are now living in temporary shelters as recovery from the eruption begins and they may need to remain in the shelters for the foreseeable future.