Biblical-Type Floods Are Real, and They're Absolutely Enormous

Geologists long rejected the notion that cataclysmic flood had ever occurred — until one of them found proof of a Noah-like catastrophe in the wildly eroded river valleys of Washington State. 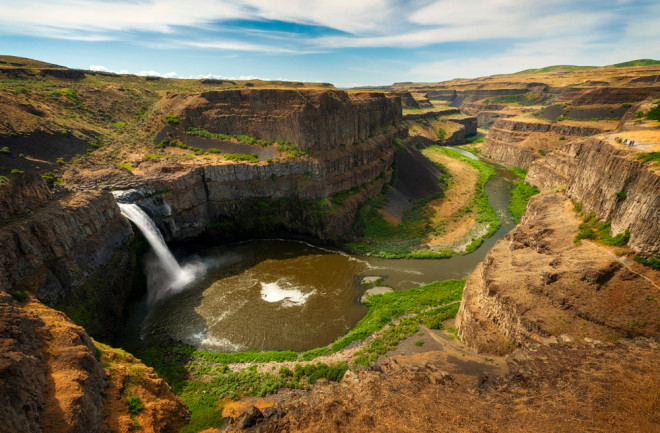 After teaching geology at the University of Washington for a decade, I had become embarrassed that I hadn’t yet seen the deep canyons where tremendous Ice Age floods scoured down into solid rock to sculpt the scablands. So I decided to help lead a field trip for students to see the giant erosion scars on the local landforms.

We drove across the Columbia River and continued eastward, dropping into Moses Coulee, a canyon with vertical walls of layered basalt. We gathered the students on a small rise and asked them how the canyon had formed. They immediately ruled out wind and glaciers. The valley was not U-shaped like a typical glacial valley, and none of us could imagine how wind might gouge a canyon out of hard basalt. But neither were there rivers or streams. After a while I pointed out that we were standing on a pile of gravel. I asked how the rounded granite pebbles came to be there when the closest source of granite lay over the horizon. Silence.

Hiking through eastern Washington canyons littered with exotic boulders is a standard field trip for beginning geologists. It takes a while to register what you see. A dry waterfall hundreds of feet high in the middle of the desert. Giant potholes where no river flows today. Granite boulders parked in a basalt canyon. Gradually the contradictions fall into place and a story unfolds. Where did wayward boulders the size of a car or house come from? What was the source of the water that moved them around and carved the falls? Today, even novice geologists can conjure up eastern Washington’s giant floods.

Long before the discovery of the scablands, geologists dismissed the role of catastrophic floods in interpreting European geology. By the end of the 19th century such ideas not only were out of fashion but were geological heresy. When J. Harlen Bretz uncovered evidence of giant floods in eastern Washington in the 1920s, it took most of the 20th century for other geologists to believe him. Geologists had so thoroughly vilified the concept of great floods that they could not believe it when somebody actually found evidence of one.

Bretz was a classic field geologist and a controversial figure throughout his career. In 1925 he presented the story of the region’s giant floods, seeing what others at first could not — and then would not — see. He spent his lifetime piecing together the story of how a raging wall of water hundreds of feet high roared across eastern Washington, carving deep channels before cascading down the Columbia River Gorge as a wall of water high enough to turn Oregon’s Willamette Valley into a vast backwater lake.

He realized the chaotic landscape had been carved by an enormous flood that chewed deep channels through hundreds of feet of solid basalt. The ancient flood deposited an enormous delta around Portland, Oregon, backing up flow into the Willamette Valley. The waters, he eventually realized, could have come from catastrophic drainage of Lake Missoula, an ancient, glacier-dammed lake in western Montana.

Bretz was ridiculed until 1940, when geologist Joe Pardee described giant ripple marks on the bed of Lake Missoula. The 50-foot-high ripples, he said, were formed by fast-flowing currents and not by the sluggish bottom water of a lake. Only sudden failure of the glacial dam could have released the 2,000-foot-deep lake. The catastrophic release of 600 cubic miles of water through a narrow gap would sweep away everything in its path. In 1979, when Bretz was 97 years old, the Geological Society of America awarded him its highest honor, the Penrose Medal.

Recognition of the Missoula flood helped other geologists identify similar landforms in Asia, Europe, Alaska, and the American Midwest, as well as on Mars. There is now compelling evidence for many gigantic ancient floods where glacial ice dams failed time and again: At the end of the last glaciation, some 10,000 years ago, giant ice-dammed lakes in Eurasia and North America repeatedly produced huge floods. In Siberia, rivers spilled over drainage divides and changed their courses. England’s fate as an island was sealed by erosion from glacial floods that carved the English Channel. These were not global deluges as described in the Genesis story of Noah, but were more focused catastrophic floods taking place throughout the world. They likely inspired stories like Noah’s in many cultures, passed down through generations.

Since devastating floods were a fact of life on the margins of the world’s great ice sheets, people in those areas probably witnessed them. Early missionaries in eastern Washington reported stories of a great flood among Yakima and Spokane tribes, who could identify locations where survivors sought refuge. An Ojibwa Indian legend from around Lake Superior tells of a great snow that fell one September at the beginning of time: A bag contained the sun’s heat until a mouse nibbled a hole in it. The warmth spilled over, melting the snow and producing a flood that rose above the tops of the highest pines. Everyone drowned except for an old man who drifted about in his canoe rescuing animals. The native inhabitants of the Willamette Valley told stories of a time the valley filled with water, forcing everyone to flee up a mountain before the waters receded.

Did survivors of such events pass their stories down through the ages? Could the biblical story of Noah, on some level, be real?

The Legend: Local folklore describes a traditional Buddhist pilgrimage that circled a small peak ringed by lake terraces. The pilgrims commemorated how Guru Rimpoche brought Buddhism to Tibet by defeating a powerful lake demon, draining its home to reveal fertile farmland. A local temple, which sits on top of a stack of ancient lake sediments, has a striking mural of Guru Rimpoche above a lake at the gorge entrance. The Temple’s head lama believes the ocean once covered all of Tibet.

The Evidence: During a 2002 expedition, geologist David Montgomery studied how the Tsangpo River once sawed through rock, carving the world’s deepest gorge. His team discovered ancient shorelines and 1,200-year-old wood fragments in lake sediments dating to around the time Rimpoche arrived in Tibet. At the head of the gorge, glacial debris was plastered on both sides of the valley, confirming that a massive tongue of ice once plunged down a nearby 25,000-foot-high peak. Two levels of terraces extending upstream indicated a wall of ice and mud had dammed the river, backing up a lake that filled the valley. Once the lake filled enough to breach the dam, a rush of water roared down the gorge, scouring out everything in its path.

The Legend: A local Native American tribe, the Havasupai, attributes the canyon’s carving to a catastrophic flood down the Colorado River that occurred when the god Ho-ko-ma-ta unleashed a tremendous rainstorm. A more benevolent god, Pu-keh-eh, put his daughter in a hollowed-out log to save her from the monstrous current. After the flood receded, she crawled out and became mother of all humanity.

The Evidence: The rocks exposed in the canyon walls could not have settled during a single flood because they alternate many times in color, grain size, and composition. Although floods did not create the canyon [pdf], evidence suggests they helped shape it. Huge boulders are perched hundreds of feet above the river. Floods capable of stranding boulders so high would have been spectacular. The breaching of cooled lava dams that impounded the river may have launched these catastrophic floods. But these deluges occurred at least 400,000 years ago, long before people made it to the continent. The Native American tale of how the canyon formed is apparently an attempt to make sense of mysterious landforms.

The Legend: In the story of Noah’s Ark, the book of Genesis says Noah lived during a time when all other people on Earth were evil. God became angry and decided to create a giant flood to kill everyone except Noah and his family. God told Noah to build a boat called an ark, big enough for himself, his wife, his sons, their wives, and at least two of every animal. Once the ark was built, God sent a rainstorm that lasted 40 days. The deluge rose higher than the tallest mountain. When the waters receded, Noah’s family and animals left the ark and repopulated the Earth.

The Evidence: After refuting the possibility of a global flood, geologists dismissed suggestions that the story of Noah’s Flood might be rooted in some sort of fact. Then, in 1993, oceanographers Bill Ryan and Walter Pitman of Columbia University used sonar to survey the floor of the Black Sea — and found evidence supporting the story after all. Submerged beneath the surface were ancient streambeds, river-cut canyons, and shorelines. High-resolution seismic reflection profiles showed a former land surface buried in the seafloor sediments. Drill cores from the seafloor contained roots of shrubs covered by marine mud. Ryan and Pitman argued that over 7,000 years ago, the Mediterranean began to rise, breaching rocks along the Istanbul Strait, a waterway that helps form the boundary between Europe and Asia today. The event caused the Mediterranean to spill into the Black Sea, triggering a catastrophic flood.

Were early farmers in the area forced to flee as their world disappeared underwater? Archaeologists found the rising waters coincided with the onset of the initial migration of farming cultures into Europe and the floodplains of Mesopotamia. Wherever they came from, the first farmers arrived in southern Mesopotamia shortly after the filling of the Black Sea. Did they bring the story of a great flood that destroyed their world?

Reprinted from The Rocks Don't Lie: A Geologist Investigates Noah's Flood by David R. Montgomery. Copyright © by David R. Montgomery. With the permission of the publisher, W.W. Norton & Company, Inc. This selection may not be reproduced, stored in a retrieval system, or transmitted in any form by any means without the prior written permission of the publisher.