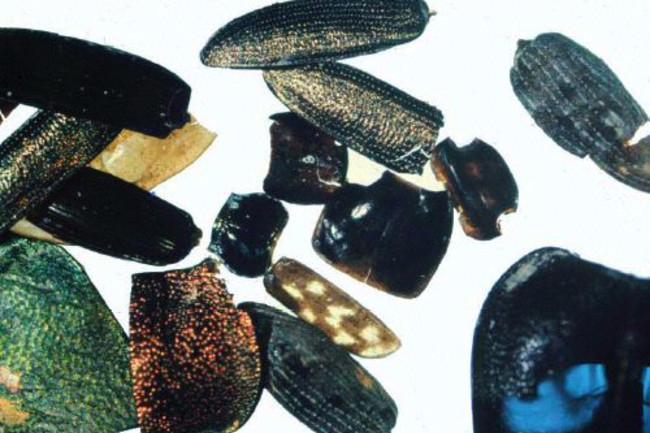 Last week I wrote a post about some new research that suggests that global warming could trigger large-scale extinctions in the next few decades. In particular, I dissected some of the objections that were leveled at the study, pointing out how irrelevant they are to the actual science at hand. Some people who posted comments raised a question that I didn't talk much about: how did biodiversity respond to rapid climate change in the not-so-distant past? After all, in the past 2.5 million years (known as the Quaternary Period) Earth's climate has become particularly jumpy. It has swung in and out of ice ages that have lasted tens of thousands of years. This warm-cold cycle has been punctuated by sudden jolts, such as a 1200-year long period called the Younger Dryas that occurred some 12,700 years ago. The climate had almost completely recovered from the last ice age, when average temperatures dropped 10 degrees or more and remained cold for more than 1,000 years. Then the Earth abruptly warmed again, in some places by as much as 15 degrees in a decade. If global warming shrinks the ranges of species until they go extinct, then shouldn't massive die-offs have happened 11,500 years ago? By coincidence, I also happen to come across a paper to be published in the Philosophical Transactions of the Royal Society by G. R. Coope, a paleontologist at the University of London. For over 30 years he has been studying the shells of beetles that have been preserved for thousands, even millions of years. (The glittering items in the picture come from long dead beetles.) Through Quaternary, beetle species have moved far--from Britain to Tibet, for example. But Coope finds little evidence of beetles going extinct in great numbers. "They indicate that insect species show a remarkable degree of stability throughout the Ice Age climatic oscillations." Shouldn't Coope have seen repeated rounds of massive extinctions instead? I decided to put these questions to a co-author of the paper that caused all the controversy in the first place, Oliver Phillips of Leeds University. "There are several quite complicated issues here," Phillips replied in an email. "Extinctions caused by climate change will be related to a number of factors." The rate at which it happens matters, as does the starting and end points of the shift. Not only that, but what you could call the "evolutionary experience" of a species matters too--which creates, in Phillips's words, "the genetic capacity of the species to adapt, migrate, or simply persist." This complexity means that you can't simply say a rise of 5 degrees will drive some fixed number of species extinct. Consider how a sudden rise of five degrees during a heat wave can kill thousands. A slower rise of 5 degrees on a winter day probably won't kill anyone at all. "If we compare scenarios for the coming century(ies) with Quaternary history, there are both parallels and differences," says Philips. "For each factor, will the future match the past?" In two important cases, the answer seems to be no: where we're starting from and where we're going. This round of global warming is not beginning in the depths of an Ice Age (or even of a Younger Dryas cold snap). Instead, we may be making a warm world warmer. In fact, if the projections turn out right, we are actually pushing the planet out of the range of temperatures experienced during the Quaternary ice age cycles within 100 years. The planet has been gradually cooling for over 50 million years, and the past 2.5 million years of ice age swings have just been ripples on this falling wave. In centuries to come, the planet may warm to a level not seen in dozens of millions years. When the world warmed at the end of ice ages, giant glaciers retreated from across the temperate zones, revealing new habitats, while isolated tropical species were able to spread out as the tropics became lush and moist. Not exactly comparable to what's going on now. The ice age cycles have been going on for so long now that many researchers--Coope included--suspect that a number of plants and animals (humans included) have evolved adaptations to these fluctuations. Beetles, for example, could tolerate the advance of a new ice age or a sudden warming by shifting their range. But they may have been adapted to making these adjustments only within the so-called climate envelope that has dominated the Quaternary. They now have a versatility that works only at cooler temperatures than they are starting to experience. "This logic lies behind the climate-envelope approach we used," Phillips explains. It may be significant that the one time that the fossil record of beetles shows them taking a hit is right at the start of the Quaternary Period, when the planet cooled abruptly and snapped into its cycle of ice ages. "So, the lesson from the fossil record is that when we have a major shift well beyond geologically-recent boundaries we have a major extinction," says Phillips. What may make the coming climate change even more brutal on biodiversity is the fact that it is happening in a world very much unlike the world 11,500 years ago, or at any other point in Earth's history. We humans are reworking the planet in all sorts of ways. Phillips says this is "probably the 'killer' factor here, and one which we didn't even include in the paper." Forests can't follow their climate to a new place if that new place is given over to farming. Biological invasions are disrupting ecological communities, making them less able to handle a stress like cliimate change. And the flux of compounds other than carbon dioxide (nitrogen, for example), is altering the biosphere in unpredented ways. All in all, we're entering a new geological period. Say farewell to the Quaternary, and say hello to the Anthropocene--a time when nothing in nature is untouched by human influence.