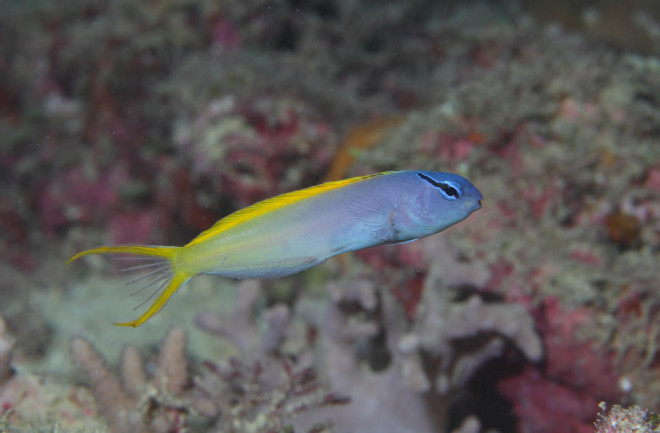 Meiacanthus atrodorsalis—a pretty little fish with a venomous bite. Photo by Klaus Stiefel via Flickr "Did you tell her the one about George Losey and the blenny?" Rich Pyle asked with a knowing smirk. Pyle and I were sitting in the living room of legendary ichthyologist Jack Randall for a piece I was writing about him for Hakai Magazine. "It's a good venom story," Pyle continued, grinning. Randall's eyes lit up with mischievious joy as he launched into the tale. He and George Losey were invited to Guam to bear witness to a massive crown of thorns sea star invasion, he explained ("It was one overlapping another as far as you could see," he recalled; "They decimated the corals of the whole northern coast"). While he and Losey were diving, Randall saw a small blenny—one of a group of blennies that he knew Losey had taken an interest in. Since he had a three-pronged sling-style spear on him, Randall caught the fish, which remained wriggling on the end of his spear tip. He asked Losey if he wanted it to examine later, and Losey did, but he didn't have any containers to put it in. So, Losey did what seemed like the obvious thing: he tucked the creature into his swim trunks. "Well, it has a venomous bite..." Randall said laughing—a fact which was unknown at the time. "It bit him right here, on the belly," Randall gestured, "and he let out a yelp!" That was how George Losey first discovered the venomous nature of fang blennies in the genus Meiacanthus, Randall explained—by making the mistake of putting one in his shorts.

Losey's 1972 paper, published in Pacific Science George Losey was the first to investigate the venomousness of fang blennies. Not deterred by his humorously painful experience with the blenny in Guam, Losey travelled to Eniwetok Atoll to observe Meiacanthus atrodorsalis and two similar-looking blenny species and perform preliminary toxicity tests. He described the reaction of mice exposed to forced bites to the tail as well as his "inadvertently provided" observations of the animal's venom that occurred due to bites to "the more tender area of my hip." The mice were unfazed by the toxic nips; they showed no notable reactions aside from a little licking of the bleeding wounds. Losey's experience, on the other hand, was hardly ignorable.

The bites were immediately painful, not unlike a mild bee sting. The puncture wounds bled freely for about 10 minutes. Within 2 minutes, each bite was surrounded by an inflamed area about 3 mm in diameter. Within 15 minutes, the inflamed areas increased in size to a maximum diameter of 10 cm. A raised white ring about 2 cm in diameter then formed around each of the wounds and persisted for about 2 hours. The general inflammation disappeared in about 4 hours but the immediate area of the puncture wounds remained inflamed for about 12 hours and the tissues were somewhat hardened for several days.

While there had been speculation about the venomous nature of these blennies because of their impressive fangs, Losey's paper was the first published account of the venom of any Meiacanthus species. In addition to describing the venom he unfortunately experienced firsthand, Losey performed feeding experiments which showed that local predators found the bitey little blennies unpalatable: "The typical reaction after taking a M. atrodorsalis into the mouth was violent quivering of the head with distension of the jaws and operculi. The fish frequently remained in this distended posture for several seconds until the M. atrodorsalis emerged from their mouth. Frequently, the M. atrodorsalis were littled harmed by the experience." Based on his observations, Losey concluded that Meiacanthus venom was defensive in nature, keeping the aggressive little fish safe from potential predators. But there was one thing that seemed a bit strange: the muted reaction of the mice. Clearly, the venom had a pronounced effect on their would-be piscine predators, allowing the blennies to escape, quite literally, from the jaws of certain doom. But most fishes that use venoms to defend themselves have toxins that induce pain. Species like stonefish and lionfish are notorious for causing intense and unrelenting agony, an obvious strategy if the goal is to convince a predator to steer clear of them in the future. Yet Losey's experience, though unforgettable, wasn't excruciating, and the mice didn't seem to notice the venom at all. So how are these little fish warding off their foes, if not by inducing pain? It would take nearly 45 years to explain the blasé murine reaction. The answer lies in the fang blennies' venom components: according to a paper published today in Current Biology, blenny venom targets their predators' blood pressure instead of pain neurons.

Lateral view of micro-CT scans of M. grammistes showing its enlarged, venom-delivering fangs. Image from Casewell et al 2017. The new research team—led by the dynamic duo of Nicholas Casewell (senior lecturer & Wellcome Trust research fellow at the Liverpool School of Tropical Medicine) and Bryan Fry (head of the venom evolution lab at the University of Queensland)—sought to discover the contents of fang blenny venom, as "nothing was known about sequences or activity," according to Fry, "which blew our minds." The researchers didn't know what to expect; they went into the study "no grand hypothesis, just basic wonderment." Part of the delay between Losey's work and the new research is due to the labor-intensive nature of extracting venom from these small fishes. While snakes and spiders make milking large quantities of venom relatively straightforward, extracting enough venom to run experiments with from a tiny teleost is less obvious and proved to be time-consuming. Luckily for the scientists, "they are such bitey little things," said Fry. "Netting them out of the tanks and presenting with a Q-tip was all it took. They'd hammer them"—though it took lots and lots of little bites to get enough venom to work with. The researchers then took the venom-laden cotton swabs and extracted the deposited proteins, which they compared to genetic analyses of expressed proteins from the animals' venom glands. The scientists found three putative toxins: an opioid-like enkephalin (a kind of peptide found in scorpion venoms), a neuropeptide similar to neuropeptide Y from cone snail venom, and a phospholipase A2 (a class of lipid-cutting toxins widely distributed in animal venoms). As most fish use sharp projections to stab predators, the blennies already stood out amongst the 2000+ species of venomous fishes for having tooth-mediated toxin delivery. Now, armed with these data, scientists know that their venoms are markedly different, too. "Most fish venoms tend to contain big globular proteins," explained Casewell, so the peptides in fang blenny venom are already intriguing. But even more fascinating is that while the toxin types identified are found in other venomous animals, none have been found in other fish venoms. These three components together explain the absence of agony and suggest a different mode of action: fang blenny venom targets circulatory systems. "While the feeling of pain is not produced, opioids can produce sensations of extremely unpleasant nausea and dizziness" explained Fry. When given to people, opioids can cause severe side effects including hypotension (low blood pressure), dizziness and loss of coordination. If opioids produce similar effects in fishes, then opioid-esque compounds in fang blenny venom could certainly mess with their potential predators, as Losey observed, allowing the blennies the opportunity to escape. Both the opioid-like enkephalin and the phospholipase also help explain the inflamed wound that Losey experienced, as similar toxins are known to promote inflammation. And, at least in cone snail venom, neuropeptide Y induces severe drops in blood pressure. With these three toxins combined, one would expect fang blenny venom to attack their opponents' circulatory systems without the agony common to other fish venoms. "Causing rapid potent hypotension is likely to invoke a highly unpleasant sensation in predators, and probably affects their coordination and/or swimming capability," said Casewell. "This seems borne out by the predator exposure studies undertaken by Losey, where the blennies are able to escape after being taken into the mouths of predators and delivering their venom, before subsequently being avoided in repeat encounters." When the team injected fang blenny venom into rats and mice, their suspicions were confirmed: it caused a notable decreases in blood pressure without inducing pain responses. So although all venomous fish use their toxins to teach predators a lesson, "blennies seem to have evolved a different solution to protect themselves compared to their spiny fish counterparts."

Meiacanthus grammistes showing off its fangs. Photo by Anthony O'Toole, with permission "This venom is absolutely unique," said Fry. "We have never seen anything like it." He's particularly excited by the newly discovered opioid toxin, as the venoms of these species may serve as a novel source of painkillers. Currently prescribed opioids have led to an epidemic of addiction, so doctors and scientists are keen to find alternatives. "We are a long way, of course, from any human medication," Fry noted, but "any new leads for opioids are always of interest." "This discovery is an excellent example as to why we must urgently protect all of nature," Fry continued. "It is impossible to predict where the next wonder drug will come from." The discoveries also explain the observations of Losey and others of species that have evolved similar color patterns and body shapes to look like Meiacanthus species. "Predatory fish will not eat those fishes because they think they are venomous and going to cause them harm, but this protection provided also allows some of these mimics to get very close to unsuspecting fish to feed on them, by picking on their scales as a micropredator," explained Casewell. Just like viceroy butterflies benefit from appearing similar to poisonous monarch butterflies, other fishes mimic their toxic cousins to avoid being eaten. That means a complex web of interactions stems from the blennies venomous bite. "All of this mimicry, all of these interactions at the community level, ultimately are stimulated by the venom system that some of these fish have," said Casewell.

Three fang blennies and some of their mimics. Figure 1A from Casewell et al. 2017 Nearly half a century after Losey's personal encounters with the now notorious fang blennies, modern science has finally explained both his reaction to the venom as well as the abundance of similar-looking fishes that live alongside these ferocious little fishes on coral reefs. But the discoveries have also raised new questions. One of the most intriguing findings that came about through this research is that the fang blennies developed their fangs long before they evolved toxins to inject with them. "This is pretty unusual, because often what we've found—for example, in snakes—is that some sort of venom secretions evolved first, before the elaborate venom delivery mechanism evolved," said Casewell. What, then, prompted the evolution of such enlarged canines, if not their use as venom-injecting fangs? And why the alternative toxins, when pain-inducing toxins are so common and have evolved more than a dozen times in other fish groups? The answers to these questions, for now, remain a mystery. Perhaps future studies over the next half century can further explain these bizarre blennies' venomous bites.