Beluga Living with Dolphins Swaps Her Calls for Theirs 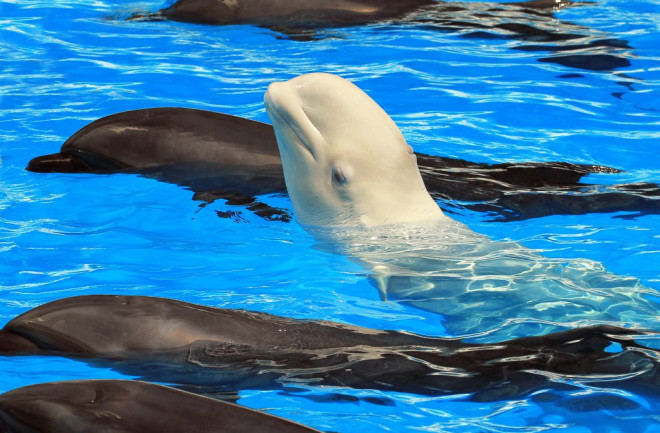 In November 2013, a four-year-old captive beluga whale moved to a new home. She had been living in a facility with other belugas. But in her new pool, the Koktebel dolphinarium in Crimea, her only companions were dolphins. The whale adapted quickly: she started imitating the unique whistles of the dolphins, and stopped making a signature beluga call altogether. "The first appearance of the beluga in the dolphinarium caused a fright in the dolphins," write Elena Panova and Alexandr Agafonov of the Russian Academy of Sciences in Moscow. The bottlenose dolphins included one adult male, two adult females and a young female. But the animals soon got along, er, swimmingly. In August 2016, one of the adult female dolphins gave birth to a calf that regularly swam alongside the beluga. The researchers were curious about what the new pool-mates were saying to each other. Dolphins are famously chatty animals. Their sounds include echolocation clicks and "signature whistles," calls that are unique to each dolphin, kind of like names. Belugas, though, are vocal virtuosos. In addition to their rich repertoire of squeaks, squeals, and other calls, they can imitate other animals and people. One captive beluga developed such a good impression of human speech that it fooled a person diving in its tank. (Here's another link to the audio.) Panova and Agafonov have been studying the acoustic communications of animals in the dolphinarium since 2010. Immediately after their beluga arrived, they made sound recordings of the whole group swimming together. Two months later, they led the beluga into a separate pool for a few dozen brief recording sessions. They made more recordings nine months after that, for a total of more than 90 hours of audio. In the beluga's first days in the dolphin pool, she gave "calls typical for her species," Panova and Agafonov write. She made squeaks, vowel-like calls, and particular two-toned sounds that seemed to be her "contact calls." Similar to dolphins' signature whistles, these are the sounds belugas make to check in with others in their group. Mother and baby belugas use contact calls to keep track of each other, as do belugas that are friends or relatives. But at her two-month recording session, the beluga was performing some new numbers. She still made her own whistles and vowel sounds, but she'd added calls that resembled the signature whistles of the three adult dolphins in her group. She also made whistles that all the dolphins shared. And she seemed to have dropped her beluga contact calls altogether. At her later recording session, the beluga's repertoire was unchanged. Panova and Agafonov say it's "disappointing" that they didn't capture earlier recordings of the beluga on her own, because they might have discovered her imitating the dolphin whistles even sooner than two months. In another study, they write, an adult beluga imitated a sound the first time it was played. Panova points out that while other studies have found belugas imitating sounds such as human speech, birdsong, and computer-generated noises, this beluga is imitating sounds that could actually help her communicate with the animals around her. The beluga, finding herself alone, may have been especially motivated to join the dolphins' social group. "This case may be an interesting example of interspecies communication," Panova says. Image: Shutterstock/Andrii Zhezhera