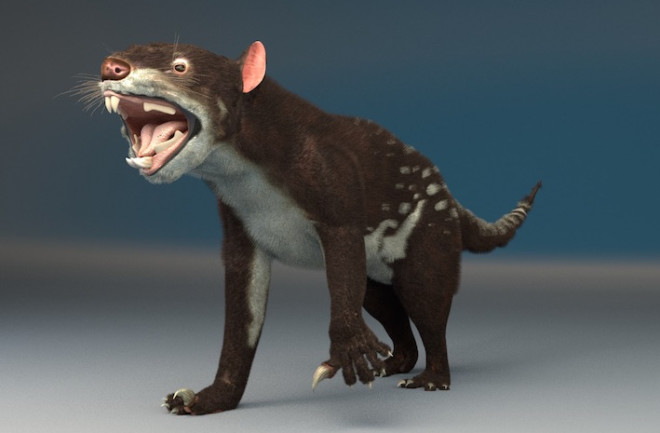 Multiple recently discovered specimens of Thylacoleo carnifex have allowed researchers to reconstruct the extinct animal’s entire skeleton for the first time, revising what we know about how Australia’s largest-ever carnivorous mammal moved. Spoiler alert: It appears that, despite weighing in excess of 200 pounds, the animal was an adept climber. Add that skill to the list of traits, including unique flesh-shearing teeth and a lethal thumb claw, that make Thylacoleo so fascinating.

Nicknamed the marsupial lion for its size and formidable teeth, T. carnifex roamed Australia for roughly 2 million years, going extinct only about 40,000 years ago. Thylacoleo was first described in the mid-19th century, based on a skull and jaw fragments that suggested it was a ferocious predator. Paleontologists have debated its actual ecological niche for decades, however, in part because subsequent finds were mostly fragmentary and it was difficult to reconstruct what the animal might have been like in life.

Fortunately, thanks to a series of finds in caves along the southern Australian coast over the last decade, including virtually complete T. carnifex individuals, researchers are finally able to piece together Thylacoleo in all its glory. The recent fossils unearthed include the first known tail and collarbone of the animal — both of which played key roles in its biomechanics.

Apex Predator Or Supreme Scavenger? Or Both?

After reconstructing the animal’s complete skeleton, the authors compared it with those of living Australian marsupials to better understand how it might have moved and, by extension, how it hunted. The researchers confirmed that Thylacoleo would have been a lousy pursuit hunter. It simply wasn’t built for chasing prey at speed. It may, however, have been a skilled ambush hunter. It’s also almost certain that it scavenged.

However it acquired its prey, Thylacoleo’s unusual dentition allowed the animal to make short work of it. Those big pointy teeth you see in renderings of its skull are not canines. Rather, they’re incisors that, unique among carnivorous mammals, evolved into large, serrated steak knives. Meanwhile, the predator’s third molar, along the cheek, is a long shearing blade.

Thylacoleo also had a large claw on its first digit, which it may have used to gut prey. At over 200 pounds (some individuals may have weighed closer to 300 pounds), it must have been an impressive animal.

Perhaps even more intriguing, we now know that T. carnifex had a heavily-muscled and fairly stiff tail, a rigid lower back and powerful forelimbs. These traits suggest the large animal was an excellent climber, able to use its tail and hindlimbs like a tripod to support its weight as it climbed.

A reconstruction of T. carnifex's skeleton (A) and body outline (B) based on multiple recent fossil finds that allowed researchers to recreate the predator's biomechanics. (Credit: Wells et al., 2018)

A reconstruction of T. carnifex‘s skeleton (A) and body outline (B) based on multiple recent fossil finds that allowed researchers to recreate the predator’s biomechanics. (Credit: Wells et al., 2018)

Exactly what Thylacoleo climbed, however, is unclear. There may have been few if any trees able to support its weight in some of the areas in which fossil remains have been unearthed.

However, the authors point to previous analysis of claw marks on steep cave and pit walls where multiple T. carnifex individuals have been found. The marks have been interpreted as evidence of skillful wall-climbing by the large animals. In addition, multiple juvenile T. carnifex individuals found in several caves across Australia suggest that the animals may have lived socially and used the caverns as communal dens.

Although not related to T. carnifex, the Tasmanian devil, an ambush predator/scavenger, may be its closest living analog in terms of body plan — but not in size. Tasmanian devils are about as big as a small-to-medium-size dog, while Thylacoleo was at least ten times as large.

The open-access study appears today in PLOS One.

Tasmanian devils like this li’l fella are not related to T. carnifex, though the authors behind today’s study note that the devils provide the best modern analog for Thylacoleo’s body plan, with one significant exception: size. Today’s Tassies weigh roughly 8-25 pounds, but Thylacoleo tipped the scales at more than 200. (Credit: G. Tarlach)