Behold, For *I* am the Giant Flatulent Raccoon! 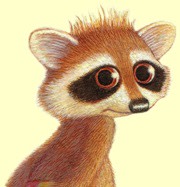 I just want to make one thing clear. When Ann Coulter talks about her Giant Raccoon Flatulence Theory, she's talking about me. Don't let anyone else tell you that they are a giant flatulent raccoon. They're all just a bunch of wannabes. For I am the One True Giant Flatulent Raccoon. Allow me to explain... Coulter dedicates the last four chapers of her new book Godless to evolution. She claims that it is nothing more than the religion of liberalism (as opposed to the foundation of modern biology, as 92 national scientific academies and dozens of scientific societies attest.) When I first heard about this bizarre news, I didn't pay much attention to it. I certainly didn't sit down to read the book, since I had more pressing matters to attend to, such as reading papers written by actual scientists about actual science. And as early reports on the treatment of evolution in Godless began emerge--documenting copious errors, illogical arguments, and other sorts of intellectual dreadfulness (see, for example, talkreason, Panda's Thumb, and Pharyngula)--I decided I had made the right choice. But then a friend told me that I, or at least one of my articles, was in the book. Now the bizarre had become the personal. I had to investigate. And when I did, I discovered that I had inspired the Giant Flatulent Raccoon Theory. You see, last July my appendix nearly burst. I got to the hospital in time to have it safely removed, and as I recuperated I wondered why I had an appendix in the first place. After all, it had nearly killed me and now I was perfectly healthy without it. When I mentioned this to my editor, she said, Cool--sounds like an essay. I agreed. I started to read scientific studies of the appendix, and I spoke to some scientists who had written about its evolutionary origins. The question remains open, I discovered, in large part because scientists have a lot of work left to do to trace its history in mammals and to understand its function in us and in other [strike]special.[/strike]species. The existence of unanswered questions in science sometimes come as a shock to non-scientists, but there are plenty. How does the brain develop in a baby, for example? Scientists have identified some important genes, but they only have the vaguest idea of how those genes work together to create the cerebellum, the cerebral cortex, and all the other parts of the brain. That doesn't make their work inconsequential or wrong. It just means they'll be busy for a few more centuries. I eventually wrote an essay (which you can read here or here) in which I explained what is and is not known of the appendix. I included a speculation from one of the scientists, Rebecca Fisher of Midwestern University, about why the appendix is still with us. She suggested that the appendix provided a net evolutionary benefit. It killed some people with appendicitis, but it also protected them by boosting the immune function in children. Testing this hypothesis is possible, although it will demand an analysis of a lot of medical records. But it is certainly plausible, since biologists have documented similar trade-offs. This caused Coulter a great snit, which appears on page 214 of Godless:

So there it is: the theory of evolution is proved again. When the appendix's use was a mystery, it proved evolution. When the appendix was thought to help humans resist childhood diseases--well, that proved evolution, too! Throw in enough words like imagine, perhaps, and might have--and you've got yourself a scientific theory! How about this: Imagine a giant raccoon passed gas and perhaps the resulting gas might have created the vast variety of life we see on Earth. And if you don't accept the giant raccoon flatulence theory for the origin of life, you must be a fundamentalist Christian nut who believes the Earth is flat. That's basically how the argument for evolution goes.

For some people, this outburst has come to epitomize Coulter's empty rhetoric. A pretty good analysis of her scientific errors published Friday on the web site Media Matters is entitled, "Ann Coulter's 'Flatulent Raccoon Theory.'" The report has triggered the spread of the flatulent raccoon meme around here at scienceblogs, and elsewhere. It has even earned its own Wikipedia entry (although its survival is still up for grabs). [Update: The deliberations at Wikipedia are over: the giant raccoon theory is now a subsection of the Ann Coulter entry.] There are plenty of passages in Godless's evolution chapters that are as wrong-headed as the Giant Flatulent Raccoon Theory. But having witnessed my own work go through Coulter's mangling machine, I can't help marvelling on just how wrong-headed it is. Coulter conveniently leaves out the fact that when I decribed Fisher's trade-off hypothesis, I stated clearly that it was just that: a hypothesis. I even pointed out that it was one of several possible hypotheses that might be worth examining. (See, for example, this Scientific American article by George Williams and Randolph Nesse in which they propose that it can't get any smaller without causing more infection). Again, that's how science works: people come up with hypotheses that are consistent with the evidence, and then they think about ways to test those hypotheses with new evidence. Instead, Coulter portrays Fisher's hypothesis as "the answer the Times gave" as to why the appendix has not disappeared--making it sound as if the Grey Lady was handing down absolute truth. She then goes one step further, and transforms a hypothesis-turned-answer into the indisputable proof of evolution. I wonder if Coulter actually read my essay--in which case she presumably knows she is misrepresenting it--or if someone just handed her a passage to quote and told her to make up a joke about farts. In any case, she manages to create a truly laughable straw man. The theory of evolution is not a pile of imagines and might-haves. It has been tested by generations of scientists and found to be the best explanation science can provide for how the natural world has gotten to be the way it is. Naturally the theory has matured over the past 150 years, and naturally many aspects of it generate fierce debates. That is how science works. If Coulter can only wage her war against evolution by misrepresenting a speculative hypothesis in an essay by a science writer, she really ought to stop and think for a moment. If she actually did, it might occur to her that she really doesn't even understand what evolution is, or what evolutionary biologists are setting out to explain. I pointed out in my essay that the appendix does not seem to be intelligently designed. "If I understand the concept of the survival of the fittest," she responds, "the appendix doesn't do much for the theory of evolution either. How does a surival-of-the-fittest regime evolve an organ that kills the host organism? Why hasn't evolution evolved the appendix away? (Another sign that your scientific theory is in trouble: When your argument against an opposing theory also disproves your own.)" "If I understand..." If only. Here, as elsewhere, Coulter write about natural selection as if it were a process that can do no wrong. So she thinks that if she just points out flaws in nature she has disproven evolution. Just before Coulter contemplates my appendix, she writes,

But, you say, there must be some characteristics that are inherently desirable without regard to whether or not the organism survived, such as intelligence, strength, or--to take something really obvious--a tendency to avoid eating poison. In one experiment attempting to prove evolution (and those are the only evolution experiments allowed by law), fruit flies were bred to avoid eating poison. One would think that if we could settle on one characteristic that is a priori "fit," it would be: "Avoid eating posion." (p.213)

Coulter is then shocked to discover that fruit flies bred to avoid eating poison are outcompeted by ordinary flies. "Yes, it's been observed for centuries that it's the truly stupid who are the most successful, live the longest, are the happiest, the wealthiest, the most desirable, and so on," she scoffs. News flash: natural selection does not produce traits that are "inherently desirable." It favors mutations that increase reproductive fitness under a particular set of ecological conditions. And the relationship between mutations and fitness is made even more complicated by trade-offs. Coulter may want to mock the fly research (which for some reason she failed to mention was published in that pseudoscientific rag, the Proceedings of the Royal Society of London), but the fact remains that the scientists found that flies bred for better learning did pay a cost in terms of how well they competed. That may not square with Coulter's experience with smart people, but it wasn't people the scientists were studying. Evolution is influenced by all sorts of trade offs, and scientists have done enormous amounts of research on them, in everything from viruses to swans. For heaven's sake, does Coulter even know about the classic trade-off, sickle cell anemia? What Coulter portrays as the death-blow to the idea that the appendix is the product of evolution is nothing of the sort. As others have observed, it would take many more pages to explain everything that Ann Coulter got wrong about evolution in Godless than she wrote herself. I will content myself with two pages of a book that now sits atop the bestseller list. And I hereby declare this blog the Original Home of the Giant Flatulent Raccoon! [Note: The raccoon picture comes from a wonderful new children's book from my old friend Ian Schoenherr, Little Raccoon's Big Question.] Update 11:30 am: Comments about Coulter's physical appearance (and other personal details) are irrelevant and, in my view, mean-spirited. They will not be accepted here.