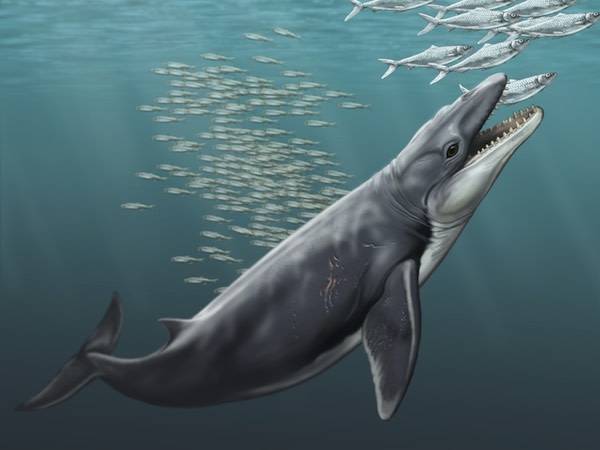 The biggest animals on Earth--the biggest animals to have ever lived, in fact--are baleen whales. They can grow to over 100 feet long thanks in part to their ability to snarf colossal amounts of food. To do so, they swing open their toothless lower jaws, which inflate like a parachute with water. Then they haul their lower jaw shut again and then use a titanic tongue to push out a school bus worth of water through a filter. The filter is baleen: a set of fronds that hangs from their upper jaws. They trap shrimp and other tiny creatures in the baleen, which the whales then swallow before preparing for the next gulp. Each one of these operations can snag a blue whale up to half a million calories. The baleen whale is a mammal. It rears its young in the womb, complete with a placenta. It makes milk to feed its newborn calves. Yet the baleen whale is obviously a far cry from any mammal on land. This 30-million-year transformation is pretty irresistible, because it's so radical and because it comes into sharper focus as the years go by. In my book At the Water's Edge, I wrote about the first stage of this transition--the evolution of hoofed mammals into amphibious creatures about 50 million years ago, and then, by 40 million years ago, into legless, full-time residents of the sea. But the first full-blown whales were still a long way from a blue whale or any other baleen whale. Rather than filtering their food, the early whales hunted for it. When they reached their prey, they bit down hard, using their powerful, sturdy jaws lined with massive teeth. Paleontologists are also documenting the second half of this metamorphosis, thanks to the discovery of some exceptional fossils. One of the best of these fossils is the 25-million-year-old Janjucetus, illustrated above by Carl Buell. Erich Fitzgerald, a paleontologist at Museum Victoria in Melbourne, has been studying this ten-foot whale for a number of years now. (I blogged about some of his earlier work here.) He has identified a number of traits that Janjucetus shares with baleen whales today, but not with any other whales. His analysis showed that it belongs to the oldest lineage of baleen whales, having branched off before the origin of many of the traits that baleen whales have today--most obviously, baleen. Janjucetus makes it possible for us to understand how something as bizarre and complex as a mouth full of baleen evolved. The most important lesson--hammered home by study after study of evolutionary transitions--is that these sorts of things don't evolve overnight. They evolve in a series of steps. Pieces of the system emerge and begin to work together, other pieces become incorporated along the way, and all the pieces take on new jobs. And at each step in the process, the transitional animals have fully working systems of bones and muscles they can use to stay alive. In a new paper in Biology Letters, Fitzgerald takes a close look at the jaws of Janjucetus. In living baleen whales, the upper and lower jaws are shaped for maximum gulpiness. The upper jaws curve upwards and out to the sides. The lower jaws don't connect at the front; instead, they're joined by stretchy fibers. When a baleen whale opens its mouth, its lower jaws pull apart to increase the volume of water they can engulf. Janjucetus only had half of this anatomy, Fitzgerald has found. Its upper jaw was wider than in earlier whales. But its lower jaw was still fused together in front. What could a whale have done with such a hybrid anatomy? Fitzgerald points to some living whales, like the pilot whale, for an answer. These whales have teeth, which they use to bite down on individual fish. But before they bite, they suck. By rapidly opening their jaws, they create negative pressure that pulls in a hapless fish. Their wide, blunt heads increase their pull. Fitzgerald argues that the upper jaw of Janjucetus evolved as a suction-boosting adpation as well. Only later, in more recent baleen whales, did the lower jaws separate, the teeth disappear, and baleen emerge. Only later, in other words, could they start the shift from chasing individual fish to dining on clouds of prey. The skull of the dolphin-sized Janjucetus served it well. But in later whales, it became a machine for feeding a Leviathan.