In the story of climate change, humans and the carbon dioxide we pump into the atmosphere are the villains of the piece. Now, it seems that we have an accomplice and a most unexpected one at that. It lives in the pine forests of North America and even though it measures just 5 millimetres in length, it is turning these woods from carbon sinks into carbon sources. It's the mountain pine beetle. 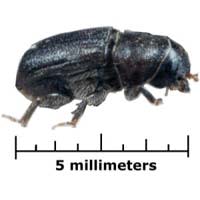 The beetle bores into pine trees and feeds from nutrient-carrying vessels called phloem. It also lays its eggs there. Once a beetle has colonised a pine, it pumps out pheromones that attract others, which descend on the tree en masse and overwhelm its defences. The infestation damages the phloem to such an extent that the tree effectively dies of malnutrition within weeks. A single beetle can live for up to a year, giving it plenty of time to damage several trees.

Normally, the beetles target weak, old or dying trees and in this capacity, they speed the growth of young trees. But occasionally, their numbers erupt in large-scale outbreaks and British Columbia is currently facing the largest one ever recorded. They have infected an area of forest the size of Greece and the scale of the epidemic is ten times worse than any previous incident. The damage is even obvious from the air, for the needles of infected trees turn red within the first year and gray as they succumb further (as illustrated after the jump...)

The outbreak is bad news for the local ecosystem and the forestry industry alike. But Werner Kurz from the Canadian Forest Service has found a subtler impact of the beetle's actions - they will transform the local forest from a carbon sink into a carbon source. Dead trees are in no position to soak up carbon dioxide from the air, and their decay will release even more carbon back into their environment. 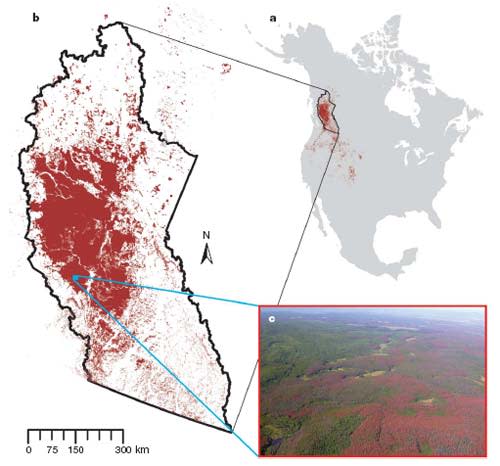 Kurz modelled the effects of the beetles in the south-central region of British Columbia between 2000 and 2020. He took a wide range of factors into consideration including growth, leaf litter, decay, forest fires and deforestation, and ran 100 different simulations under a range of different conditions.

For the first two years of the simulation, the forest was a carbon sink, soaking in half a million tonnes of carbon every year. After 2002, things changed and the falling forests turned into sources of carbon, giving off an average of 17.6 million tonnes every year between 2003 and 2020.

The beetles' tree-killing antics will result in the release of about 270 million tonnes of carbon over the 21 year period covered in the simulation. The forestry industry is managing the infestation with "salvage-logging", felling infected trees to prevent the spread of the beetles and to recover some economic value from the timber. This harvest will add another 50 million tonnes of carbon to the beetles' direct tally, although only a small proportion of this will be released into the atmosphere.

The effects of these tiny insects matches those of more usual suspects. Kurz predicts that this single outbreak will release as much carbon dioxide over 21 years as Canada's entire transportation sector does over five. And the annual amount of carbon released by the beetles in this small patch of British Columbia is similar to the amount given off by forest fires over all of Canada during earlier decades.

The beetles hardly absolve Canada of responsibility over our changing climate, for it was probably climate change that triggered their extraordinary outbreak in the first place. Cold snaps kill the majority of beetles. But over the past few decades, global warming has shifted British Columbia's climate toward milder winters and hotter, drier summers - conditions that the beetles have been quick to exploit by expanding their range, and colonising forests further north, and at higher altitudes.

The problem isn't restricted to British Columbia. The mountain pine beetle is wreaking havoc in other parts of North America, and elsewhere, warmer climes have allowed spruce beetles to reproduce in half the time, wreaking havoc on spruce forests. Kurz's results suggest that infestations of tree-boring insects all over the world could be driving vicious cycles of larger infestations, increased carbon emissions and rising temperatures.

There is one positive note. Kurz's simulations suggest that we are currently experiencing the peak of the epidemic. Using data on the beetle populations, the number of remaining host trees and the judgments of entomologists, Kurz predicts that from 2009, the beetles will start literally eating themselves out of house and home. They will have damaged such a large area of pine forest that their own numbers will start to fall.

Even so, the impact of the mountain pine beetles will last much longer than their population. By 2020, the forest's productivity will have started to recover, but it still won't have returned to pre-outbreak conditions. Kurz feels that the forests will eventually recover but he feels uneasy about making projections beyond the 2020 mark, especially since the area is predicted to go through even larger climate upheavals in the future.

Update: Over at The Voltage Gate, Jeremy neatly uses this study as a jumping point for talking about the extent of public concern over climate change. It's well worth your time.