Beetle turns itself into a wheel (that's how it rolls) 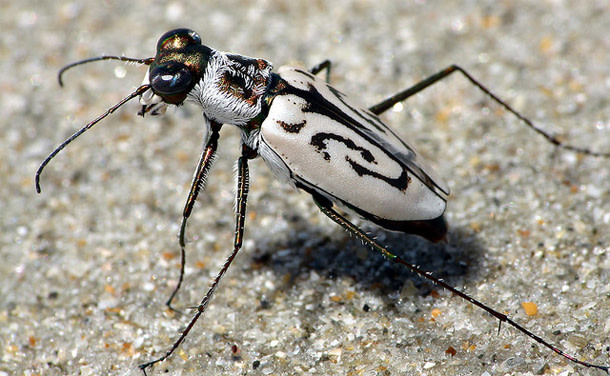 The southern beaches of Cumberland Island, off the coast of Georgia, USA, are part of a national park. To protect the area, only residents and staff are allowed to drive their vehicles on the sands. But there are plenty of wheels nonetheless – small, living ones. The beaches are home to the beautiful coastal tiger beetle (Cicindela dorsalis media). Tiger beetles are among the fastest of insect runners, but their larvae are slow and worm-like. If they’re exposed and threatened, running isn’t an option. Instead, they turn themselves into living wheels. They leap into the air, coil their bodies into a loop, and hit the ground spinning. The wind carries them to safety. The fact that a long, worm-like animal can jump and roll is amazing in its own right. The ability is even more remarkable because the tiger beetle is “one of the best-studied insect species in North America” and until a few years ago, no one had ever seen it doing this. Alan Harvey and Sarah Zukoff were the first. They write, “[Sarah] was walking through some unusually loose sandy drifts on Cumberland Island and happened to kick up some C. d. media larvae, which promptly started wheeling.” [embed width="610"]http://www.youtube.com/watch?v=wXd7jhX0dzE[/embed] To work out how they transform and roll out, the duo spent two summers looking for more burrows and flicking out the beetles with a well-placed trowel. If they prodded the exposed larvae with a blade of grass, the grub thrashed about the sand before suddenly zipping along its surface in a straight line. 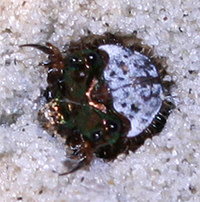 That’s what it looks like to the human eye. High-speed cameras revealed more complex movements. Often, the beetle threatens its provocateur with its formidable jaws (see right). Sometimes, it plays dead or throws up. If you touch it on its bottom half, it arches its body backwards head-to-tail, forming a loop. It then violently uncoils, launching itself off the sand and coiling in the other direction. When it hits the again, its momentum carries it forward. It can also land in the right direction to roll with the wind. Its mad thrashing is really its way of turning its ignition and steering. Once started, the beetles continue rolling in the direction of the wind. They move at around one mile per hour, spinning at 20 to 30 revs per second, and travelling for up to 25 metres. If the winds are particularly strong, they could roll faster than Harvey and Zukoff’s assistant could run – around 7 miles per hour on the sand.

[embed width="610"]http://www.youtube.com/watch?v=8Zx5Yeyw_PM[/embed] They hold their three pairs of legs out to the side to balance (the videos showed them wobbling but not falling over). And they’re strangely manoeuvrable - by pushing off with their tails, they can do jumps mid-roll to gain extra speed, and even change direction by 90 degrees. In Phillip Pullman’s His Dark Materials trilogy, fantasy creatures call mulefa roll around by sticking their legs through the holes of large, round seeds. In the real world, there are no animals whose bodies include proper wheels, which turn about an axle. Stephen Jay Gould famously argued that such adaptations would be impossible. The wheel would need to rotate freely about the axle, so if they were both part of the same individual, how would it carry nutrients or nervous signals to the wheel? Nonetheless, animals can turn their entire bodies into rudimentary rolling wheels, albeit without the accompanying axles. Many species have independently reinvented the wheel technique. The wheel spider (or dancing white lady spider) cartwheels down the dunes of Africa’s Namib Desert by flipping on its side, and tucking its legs in to form spokes. It also rolls defensively, to escape from body-snatching wasps. One species of salamander, the pearl moth caterpillar, and one species of mantis shrimp can all do the same. [embed width="610"]http://www.youtube.com/watch?v=bzAF7WuXhKA[/embed] [embed width="610"]http://www.youtube.com/watch?v=HmLS2WXZQxU[/embed] Some of these species use gravity to power their rolls. But uniquely, the tiger beetle usually rolls uphill. It relies on the wind to push it along and during the day when it’s most active, the prevailing winds usually blow up the beach form the ocean. It’s a fair bet that they don’t use the same technique at night, when they would just blow out to sea. Once they get going, the only thing that foils the beetles’ wild rides is a rough beach. Rocks, ridges and uneven patches of sand can stop them in their tracks. Sadly, these features are becoming more and more common as Cumberland Island’s beaches are trampled by 40,000 tourists a year. Perhaps this explains why the beetle’s populations have recently plummeted across American beaches, particularly heavily used ones. Where humans are on a roll, the beetles aren’t. Reference: