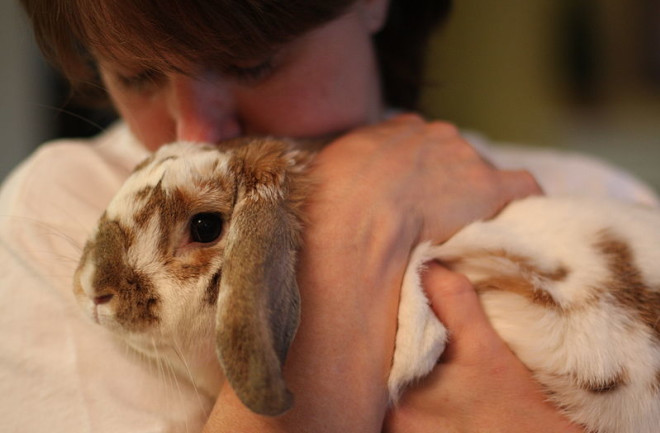 Researchers have found changes to rabbit brains that may explain why your pet bunny is so snuggly. Photo Credit: Alex The process of domestication fundamentally changes an animal's looks and behavior. Floppier ears and a loss of fear of humans, for example, are nearly universal in domesticated species. Now, researchers have learned what domestication looks like in the brain—at least, for rabbits.  It's not exactly clear when rabbits were converted from one of nature's most skittish animals into the soft, snuggly buddies so often chosen as class pets. But somehow, selective breeding led to bunnies that have lost most of the anxiety their relatives rely on to survive. And it only makes sense that such a shift would show up in their brains. The research team based largely in Sweden, Spain and Portugal had looked at the genomes of wild and domesticated rabbits before, and found distinct differences in genes associated with brain and neural development. So they decided to look for what those genetic changes might be actually doing. "No previous study on animal domestication has explored changes in brain morphology between wild and domestic animals in such depth as we have done in this study," explained Leif Andersson, a geneticist with Uppsala University in Sweden and coauthor on the new paper published this week in Proceedings of the National Academy of Sciences, in a press release. To get this new data, the team raised eight wild rabbits and eight domesticated rabbits (from three breeds) under similar conditions until they were fully grown. Then, they imaged their brains using an MRI.

This is your (bunny) brain. This is your (bunny) brain, domesticated. Figure Credit: Fabian Sinzinger The brains of the domesticated rabbits were smaller for their body size, but that wasn't surprising, as similar brain 'shrinkage' has been noted for other domesticated species. What really stood out were the other changes to the brain. "Domestic rabbits have a reduced amygdala and an enlarged medial prefrontal cortex," explained first author Irene Brusini, a PhD student at KTH Royal Institute of Technology in Sweden. When corrected to brain size, the domesticated rabbits' amygdala's were roughly 9-10% smaller, while their medial prefrontal cortices were about 11-12% bigger. These are areas of the brain involved in sensing and processing fear, so the authors believe their change in size likely underlies the domestic bunnies' characteristic friendliness. And that wasn't all—there was also a reduction in white matter—the nerve fibers responsible for connecting regions of the brain into functioning circuits—in the domesticated rabbits. "The reduced amount of white matter suggests that domestic rabbits have a compromised information processing," said Mats Fredrikson, a professor at Uppsala University and one of the paper's senior authors. And that, he believes, might explain their slower reaction times and generally calm demeanor. The research team didn't really expect the magnitude of the differences in the brains—they thought the changes might be too subtle to be seen. But there was no denying the clear differences between the brains, especially since the analyses were conducted blindly (the scientists analyzing the images did not know which brains were wild and which weren't). A previous study on mink also found differences in the sizes of different brain parts between wild and domesticated versions (including a reduction in white matter in domesticated versions), as have similar studies in other species, but they lacked the resolution of MRI. These much more detailed data give scientists new insights into how domestication really happens—and it'll be especially interesting to compare these results with future detailed studies of other domesticated animals to see if all domesticated brains share similar features, or if the process varies dramatically by species.