Beak Evolution Gives New Insight Into the Beginning of Birds 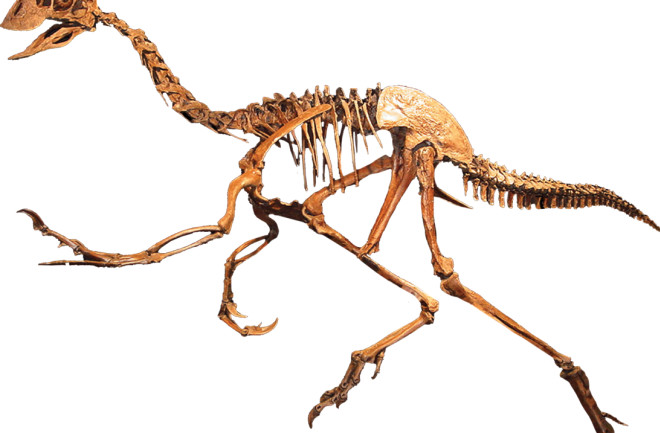 A dinosaur of the group Caenagnathidae, which had teeth as children, but grew beaks as adults. (Credit: Wikimedia Commons) It’s well known that theropods were the ancestors of modern-day birds, but exactly how these dinosaurs made the transition from fearsome maws to toothless beaks has been unclear. A new study from researchers in China shows various adolescent species of toothed theropods actually had both for a time — they transitioned from toothy jaws to beaks during adolescence. Theropods are what probably caught your eye as a child — whether it’s the Tyrannosaurus, Velociraptor, or Spinosaurus, many theropods were defined by their imposing bipedal stature and wicked dentition. The word “theropod” itself translates to “beast-foot,” so you know these dinosaurs weren’t messing around.

The transition to toothlessness (also known as edentulism) is thought to have happened at least seven times independently during the evolution of theropod dinosaurs. It’s not particularly surprising to learn that numerous species lost their teeth as they evolved into beaks, but the study, published Monday in the Proceedings of the National Academy of Sciences, suggests that the reduction of teeth and the evolution of beaks seem to have overlapped. The study examined jaw fossils from a member of the bird-like theropod group Caenagnathidae as well as from an early Cretaceous bird, Sapeornis. While they had beaks as adults, scans of the Caenagnathidae skeleton also turned up jaw ridges and toothlike structures, and Sapeornis had teeth in the front of its upper jaw. Both represent the transitional stage in evolution from toothinesss to toothlessness, the researchers say. The ridges and quasi-teeth indicate that these theropods were born with teeth, but lost them in the process of maturation — resulting in completely toothless beaks, the researchers say.

Computer tomography and synchrotron scans indicated the presence of bony tooth sockets and other jaw features in the fossils. The features were also similar to another beaked theropod, Limusaurus, the only other dinosaur in which a shift from teeth to beaks has been definitively proven. Previous research indicated that Limusaurus also transitioned from toothed juveniles to toothless beaked adults, suggesting that a reduction of teeth during maturation may explain the similar dental morphologies of all three theropods, not just the Limusaurus. The researchers think that a protein called bone morphogenetic protein 4 may have driven the switch from adolescent toothiness to adult beaks. This kind of dental reduction would have also made the repeated evolution of beaks much easier in both nonavian theropods (like Caenagnathidae and Limusaurus) and birds (like Sapeornis). The shift was probably driven by increasingly specialized diets, and the emergence of recognizably avian behaviors such as adults foraging for juveniles and regurgitation feeding, as well as a shift to more herbivorous diets in adulthood — activities for which toothless beaks are more than adequate.