Ballistic Penises and Corkscrew Vaginas: The Sexual Battles of Ducks 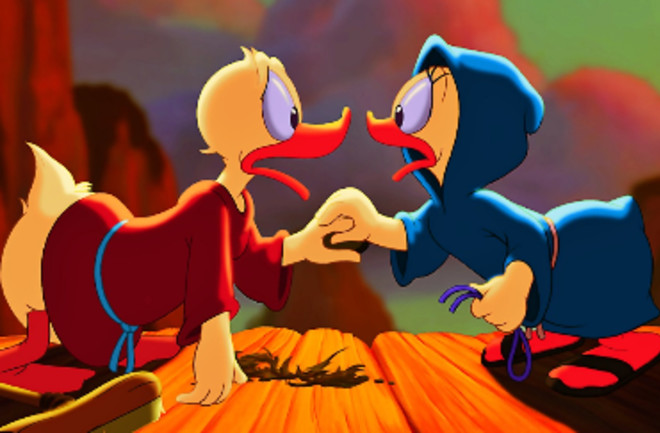 Donald and Daisy Duck in Fantasia 2000.

Patricia Brennan from Yale University is trying to encourage male Muscovy ducks to launch their ballistic penises into test tubes.

Normally, the duck keeps its penis inside-out within a sac in its body. When the time for mating arrives, the penis explodes outwards to a fully-erect 20cm, around a quarter of the animal’s total body length. The whole process takes just a third of a second and Brennan captures it all on high-speed camera. This isn’t just bizarre voyeurism. Duck penises are a wonderful example of the strange things that happen when sexual conflict shapes the evolution of animal bodies.

Many ducks form bonds between males and females that last for a whole mating season. But rival males often violently force themselves onto females. To gain the edge in these conflicts, drakes have evolved large corkscrew phalluses, lined with ridges and backward-pointing spines, which allow them to deposit their sperm further into a female than their rivals. These extreme penises are even more unusual when you consider that 97% of bird species lack any penises whatsoever.

But female ducks have developed countermeasures. Their vaginas are equally long and twisting, lined with dead-end pockets and spirals that curve in the opposite direction. They are organic chastity belts, evolved to limit the effectiveness of the males’ lengthy genitals. Two years ago, Brennan showed that duck species whose males have the longest penises tend to have females with the most elaborate vaginas. Now, she has found further evidence that these complex genitals are the result of a long-lasting war of the sexes.

Duck penises (and those other birds) work in a different way to human ones. For a start, they are flexible when erect. Human penises stiffen thanks to an onrush of blood; for ducks, it’s lymph that does the job. Finally, human males get erections before having sex but drakes evert their penis directly into the female’s vagina.

That presents a problem. To really study the mechanics of a duck penis, you can’t just fluff the animal. You need to give it something to have sex with. That’s where the glass tubes come in. Brennan used four different shapes: a straight tube; a counterclockwise helix that matches the spiral of the male’s penis; a clockwise spiral going in the opposite direction; and a tube with a sharp 135 degree kink, that mimics the position of the first cul-de-sac pouch in the female’s vagina.

Brennan took these tubes to a commercial duck farm in California, where Muscovy drakes provide semen for artificial insemination. She watched as the handlers placed a female in the same cage as a randy drake, and waited until the male mounted her. Just as he was getting ready to mate, Brennan intercepted him with one of the four oiled tubes, touching it to a pair of sensitive spots that immediately trigger the explosive erection and ejaculation.

Her videos revealed the process of duck erection in painstaking detail, including how long it takes to evert the different parts of the penis, how fast the ejaculate is and how long it takes to retract the appendage (around 2 minutes). They showed that the drakes easily launched their penises into the straight tubes and the ones that matched the direction of their spiral. The tubes that spiralled in the wrong direction or bent at a sharp angle proved to be more challenging, and mostly stopped the males from achieving a full erection.

So the shape of the female duck’s vagina is a physical barrier that prevents the male from launching forth his ballistic penis to its fullest extent. It won’t stop a drake from ejaculating (and those in Brennan’s trials always did), but it does limit how far the semen is deposited along the vaginal tract.

Not all males are hit equally hard by these defenses. Those that the female actually wants to mate with have an easier time. If she’s into a male, she strikes a pose that signals her receptiveness, keeping her body level and lifting her tail feathers high. She repeatedly contracts the walls of her genital tract, relaxing them for long enough for favored suitors to achieve full penetration.

Males who try to force themselves upon her receive no such help and have to cope with vigorous struggling. The female may not be able to resist such advances, but her convoluted vagina gives her ultimate control over where the sperm of her current partner ends up. The fact that only 3% of duck offspring are born of forced matings suggests that females are indeed winning this battle of the sexes. Clearly, it’s not size that matters, but what she lets you do with it that counts.