Classical ballet is one of the more conservative of art forms. Dancers express emotion and character through the same vocabulary of postures that was originally set in 1760, and often with entire choreographies that have been handed down for centuries.

But even amid this rigorous cascade of tradition, there is room for change. Over the years, successive generations of ballet dancers have subtly tinkered with positions that are ostensibly fixed and limited by the physical constraints of a dancer's body. The only changes ought to be a result of the dancers' varying abilities. But that's not the case - over the last 60 years, the position of a dancer's has become increasingly vertical, with the moving leg in particular being lifted ever higher.

Elena Daprati from the University of Rome thinks that these tweaks have been driven by social pressures from audiences. When she reduced pictures of dancers to stick-figure drawings, she found that even people who have never seen a ballet prefer the postures of modern dancers to those of dancers 60 years ago. The results suggest that art can change very gradually because of constant interactions between performers and their audiences.

Almost more importantly, they show that the usually unquantifiable world of artistic expression can be studied with a scientific lens. In this case, the formal nature of classical ballet gave Daprati a rare opportunity to do so. Body postures could be objectively analysed, movements are standardised enough to allow for easy comparisons, and most of all, performances have been carefully archived for decades. That provided Daprati's group with more than enough raw material for studying the evolution of ballet postures over time.

Daprati raided the archives of London's Royal Opera House for photos and videos of dancers from 1946-2004. She focused on a single piece of choreography from Tchaikovsky's The Sleeping Beauty ("The Rose Adagio" in Act I), and on productions by a single company - the Royal Ballet. All in all, she gathered 153 images of six standard positions, such as arabesque sur la pointe, where the dancer stands on one leg and extends the other behind her, and developpe a la seconde, where one leg is extended smoothly into the air.

She reduced each image to a stick figure and calculated the angle between the raised "working leg" and the vertical supporting one. For each position, Daprati found that this angle increased as the years went by. Take developpe a la seconde - in the 1940s, dancers held their moving leg just above the 90 degree level, but today's dancers effectively extend it straight up with an incredible 180 degree gap between their two legs. 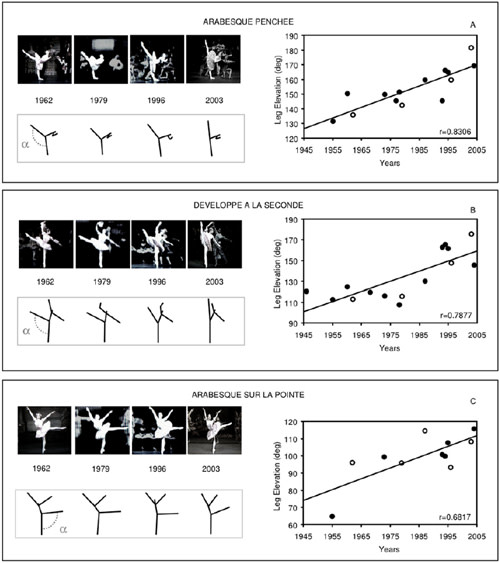 Sceptics might argue that these trends could just reflect a sampling bias, where later images were chosen for their more extreme postures. But Daprati actually found that individual dancers are actually quite consistent in any given production. The variation in their postures is substantially smaller than the variation in leg position across the years.

This change in a supposedly established position must have demanded ever-increasing feats of balance from ballerinas over the years, especially since the angle of their trunks was the same. In short, they were lifting their legs higher and higher without compensating by lowering their bodies. A dancer's ability to do this depends on her skill at rotating her hips - a basic but essential technique called turnout, which has clearly been perfected across the years.

It's easy to think that the increasingly extreme postures of classical ballet simply reflect a trend towards increasingly dextrous and showy dancers. But to Daprati, that's not the whole picture. For a start, she points out that the trend towards increasingly vertical legs also applied to postures where the leg isn't lifted very high or where a male dancer provides support. In these situations, the leg could actually be lifted even higher and presumably by dancers much earlier on in history. But that wasn't the case. And even younger, less experienced dancers performing Sleeping Beauty's simpler "Fairy of Purity" movement showed the same trend over time.

Daprati suggests that these postures have responded to subtle pressures from the 20^th century's ballet-going audiences. She converted her images into stick figures or four-sided shapes with corners at the ballerina's hands and feet. For both types of images, she found that 12 recruits with hardly any experience of ballet were more likely to prefer those taken from more recent years, than those hailing from the post-war period.

Of course, we have no way of knowing if audiences from the 1940s felt the same. But even without that knowledge, it's clear enough that the postures modern dancers have gradually shifted towards are those that modern people find most appealing. To Daprati, this suggests that the changes have been affected by aesthetics as much as by the physical prowess of the dancers.