New parents are often extremely picky about where they live, seeking the right combination of spacious housing, local schools, and safe neighbourhoods for their tiny sprogs. A mother mosquito is no less choosy but unlike the white-picket-fence ideal of middle-class humans, she prefers areas of stagnant water, including artificial ones like rain-filled buckets or clogged drains.

But she's not looking for just any old bucket of sluggish water. A new study reveals that a pregnant Aedes aegypti mosquito seeks out just the right patch by tasting for chemicals given off by bacteria in the water. When her young hatch, bacteria will be their only food and to make sure that they are well-fed, she looks out for a special blend of fatty acids at very precise concentrations.

That's interesting in itself, but there are obvious practical applications too. If we know the exact balance of chemicals that entice female mosquitoes to lay in certain patches of water, we can manipulate their behaviour and for Aedes aegypti, that's certainly worth doing.

This species is the main carrier of yellow and dengue fevers, a devastating combination of tropical diseases that affects over 50 million people every year in 100 different countries. Dengue fever in particular is on the ascent in Asia and has recently spread to Central and South America. Clearly, something must be done and among the many strategies being considered, pregnant females present obvious targets.

Loganathan Ponnusamy from North Carolina State University discovered the choosy natures of pregnant females by giving them choices between different cups containing water or infusions of fermenting leaves. The females preferred the infusions to plain water, but when Lognathan filtered these to remove any microbes, the females were still attracted but laid far fewer eggs.

When the residues removed from the filters were resuspended in sterile water, these then stimulated egg-laying. All in all, pregnant females lay at least 90% of their eggs in bacteria-rich liquids. Even cups that contained water laced with cultured bacteria still tempted the females. 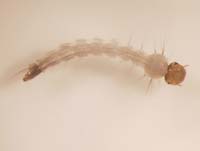 With a series of further choice tests, Ponnusamy narrowed down the stimulating chemicals to a particular selection of fatty acids and fatty acid methyl esters that are typically released by bacteria. And not only are females fussy about the exact chemicals they're looking for, but they're picky about the concentrations of these substances. Bacteria may be food for larvae, but there can be too much of a good thing. High concentrations of the chemicals release could be a sign of a "eutrophic" container, where bacterial growth is so high that the water is choked of other essential nutrients.

To discover the optimal blend of molecules, the researchers tested female mosquitoes with an alluring mix of two fatty acids and one methyl ester. An optimal concentration of 10 nanograms in 30ml caused pregnant females to drop 85% of their eggs. Raise or lower the concentration by a factor of 10, and they'll only lay about 60-70% of them.

So with the right combination of smells, we can encourage A.aegypti to deposit the majority of her eggs in one go, and that could be the key to countering a tactic that this species uses to ensure its survival. Females don't like laying their eggs in one basket and instead, lays small groups at lots of different sites. In doing so, they reduce their chances of losing an entire clutch in one fell swoop.

By loading water with chemicals that simulate the right concentration of bacteria, health workers could stimulate females to lay their eggs at a site of their choice and lure them into traps. These traps are used to monitor the spread of dengue-carrying mosquitoes in endemic regions, but they could find uses in elimination as well as surveillance.

For a start, traps containing poisons could kill ensnared females directly. A sneakier strategy involves using their own egg-laying tactics against them. Rather than lethal poisons, traps could be laced with chemicals like pyripoxyfen that do not harm the adults, but are designed to stunt the development of mosquito larvae. A released female would fly away to contaminate other egg-laying sites with pyripoxyfen, rendering them inhospitable to larvae. Those already within would be unlikely to reach adulthood. With the right smells, we could turn female mosquitoes into unwitting double agents.