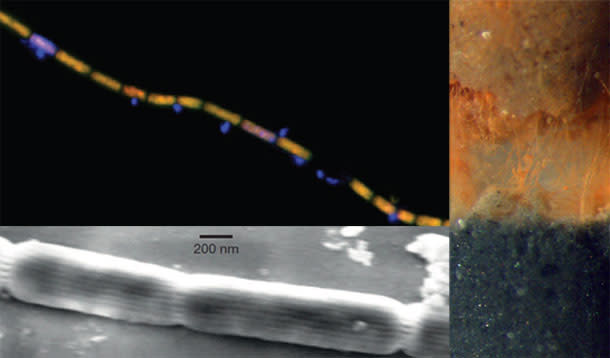 The bay at the Danish port of Aarhus is pretty enough, with the usual fare of beach-goers, holiday homes and yachts. But the bay’s most spectacular residents live in the mud beneath its water. Back in 2010, Lars Peter Nielsen found that this mud courses with electric currents that extend over centimetres. Nielsen suspected that the currents were carried by bacteria that behaved like electric grids. Two years on, it seems he was right. But what he found goes well beyond what even he had imagined. Nielsen’s student Christian Pfeffer has discovered that the electric mud is teeming with a new type of bacteria, which align themselves into living electrical cables. Each cell is just a millionth of a metre long, but together, they can stretch for centimetres. They even look a bit like the cables in our electronics—long and thin, with an internal bundle of conducting fibres surrounded by an insulating sheath. Nielsen thinks that each cable can be considered as a single individual, composed of many cells. “To me, it’s obvious that they are multicellular bacteria,” he says. “This was a real surprise. It wasn’t among any of our hypotheses. These distances are a couple of centimetres long—we didn’t imagine there would be one organism spanning the whole gap.” The bacteria are members of a family called Desulfobulbaceae, but their genes are less than 92 percent identical to any of the group’s known members. “They’re so different that they should probably be considered a new genus,” says Nielsen. They’re only found in oxygen-starved mud, but where they exist, there’s a lot of them. On average, Pfeffer found 40 million cells in a cubic centimetre of sediment, enough to make around 117 metres of living cable. The bacteria join forces to transfer electrons from the deeper mud towards the surface. These electron transfers are the stuff of life. Each of our cells strips electrons from food, hands them from one protein to another, and eventually deposits them onto oxygen, releasing the energy that they need to survive. All of this takes place inside a single cell. The cable bacteria do the same thing, but across a huge chain of cells. They do this to tap into a rich source of energy—sulphides within the mud. These chemicals can easily donate electrons, but there’s no oxygen around to accept them—no way of completing the chain. All the oxygen is centimetres away, in the top-most sediment. By uniting into cables, the bacteria can span this gap. Those at the bottom tear electrons from sulphides (they “eat”), and send them up to those at the top, which shove them onto oxygen (they “breathe”). Neither could do so without all the cells in the middle. 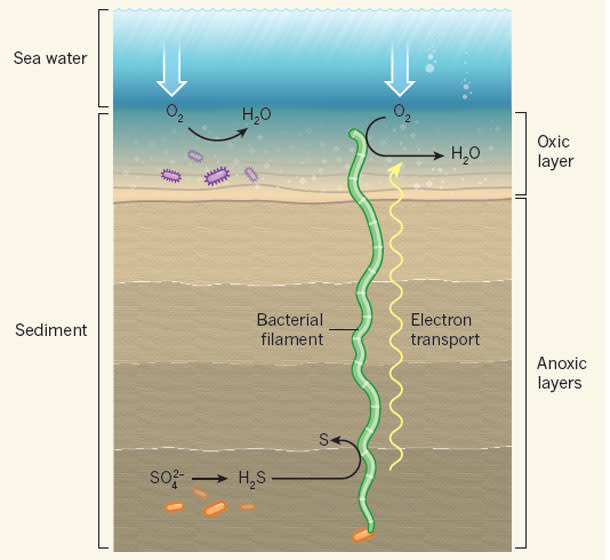 Until rather recently, scientists thought that microbes could only send electrons over short distances – nanometres (billionths of a metre) at most. Then, in 2005, Gemma Reguera and Derek Lovley found that a species called Geobacter sulfurreducenscould send electrons over micrometres (millionths of a metre) using hair-like extensions called pili (or nanowires). Over time, they and others showed that pili networks could send electrons over far larger distances - 100 micrometres, then a millimetre, and then a centimetre. “That's a ten million fold increase in the measured length of biological electron transport over the course of six years!” says Lovley. Other scientists have suggested ways in which bacteria could create long-distance currents. Earlier this year, Kazuya Watanabe suggested that they use iron minerals as a go-between. But Nielsen couldn’t see any traces of nanowires when he looked at the bacteria under a powerful microscope. And minerals might help, but they aren’t necessary—if Nielsen replaced the sediment with glass spheres, the bacteria could still carry currents. Nielsen has plenty of indirect evidence that the microbes are living conductors. If he threaded tungsten wire horizontally through the sediment, he short-circuited the bacterial cables and stopped them from carrying current to the surface. If he placed filters in the way so that the cables couldn’t assemble, he also managed to stop the currents (but not if the filters had pores big enough for the bacteria to pass through). But Watanabe and Lovley both point out that the team haven’t directly measured the currents flowing across his bacteria. “Yeah, that’s a problem,” says Nielsen. “We’ve tried to use the techniques that worked well for bacterial nanowires, but they didn’t work, probably because [our bacteria] are insulated.” Under an electron microscope, the team saw that the cable bacteria have a set of 15 or 17 ridges running along their length. In cross-section, they look like gears. The bacteria also seem to share an outer membrane, which extends over the entire filament, like skin draped over sausage links. Nielsen thinks that the ridges are channels for sending electrons from one cell to another, and the shared membrane acts as an insulating sheath. “They compare very well with our electric cables,” he says. But that’s just a guess. It’s not clear what the ridges are made of, but Nielsen is trying hard to find out how exactly the bacteria are channelling their electrons. That’s just one of many unanswered questions. How do the bacteria organise themselves in a neat vertical line? Do they get parasitised by other species that steal their electrons? What do the cells in the middle of the chain get out of their arrangement? How do the cells divide so that the filaments don’t break? And how common are they? “They seem to be the optimal organism in any place where you become short of oxygen,” says Nielsen. “Why are they not everywhere? Or are they everywhere?” Reference: Pfeffer, Larsen, Song, Dong, Besenbacher, Meyer, Kjeldsen, Schreiber, Gorby, El-Naggar, Leung, Schramm, Risgaard-Petersen & Nielsen. 2012. Filamentous bacteria transport electrons over centimetre distances. Nature http://dx.doi.org/10.1038/nature11586Images from Pfeffer et al, and Nature News & Views article More on electric bacteria: