When researchers made a shark throw up to see what it had been eating, feathers came out. 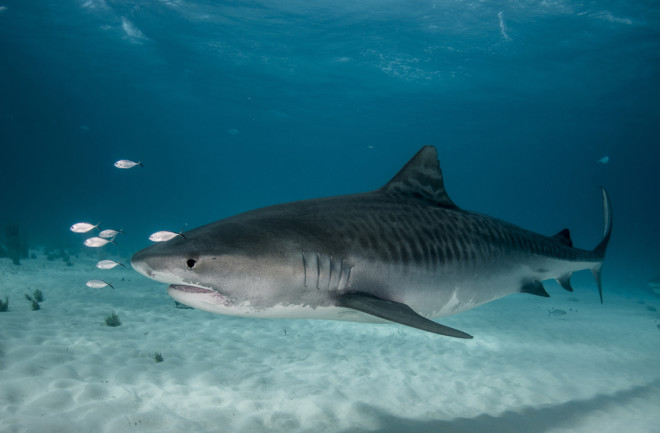 Often called “the garbage cans of the sea,” tiger sharks are voracious eaters. The sharks will eat just about anything — fish, other sharks, seabirds, sea turtles, whale carcasses. The list goes on.

That hodgepodge of prey now also includes a few creatures that don’t usually even go in the ocean. Young tiger sharks also feast on sparrows, woodpeckers and other land-based birds, says a group of researchers. The adolescent sharks are probably dining on songbirds in order to fill their bellies as they work to improve their hunting skills, they say.

“While tiger sharks are known to consume birds, we were surprised to see that all the birds we identified were terrestrial,” said Marcus Drymon, a marine fisheries expert at Mississippi State University in Biloxi, who led the new research.

Drymon and colleagues have been keeping tabs on tiger shark populations along the Mississippi and Alabama coasts for nearly a decade. As part of a routine monitoring survey in 2010, Drymon captured a small tiger shark to tag and release. When the researchers made the shark throw up to see what it had been eating, feathers came out. DNA analysis revealed they belonged to a brown thrasher, a highly musical songbird about the size of a robin that usually calls scrubby fields and dense woods home.

Over the next eight years, Drymon and colleagues examined the stomach contents of more than 100 tiger sharks looking for feathers, beaks, feet and other bird remains. More than a third of the tiger sharks’ stomachs had bird remnants, the researchers report Tuesday in the journal Ecology.

Drymon sent the remains to Marcus Feldheim, a molecular systematics researcher at the Field Museum in Chicago, for DNA analysis and identification. Feldheim identified 11 bird species in the sharks’ stomach contents. In a major surprise, none of the remains belonged to a seabird.

“I assumed the DNA would tell us they belonged to things like gulls or pelicans, not species like house wrens, doves, and sapsuckers,” Feldheim said.

Birds on the Stomach

The researchers found most of the fatal bird-shark run-ins happened in the fall, when birds migrating south take a final break along the coast before making the long journey across the Gulf of Mexico. The birds time their departure to make the best use of southward winds. But bad weather can force the birds toward the surface of the water, making them sitting ducks (and sparrows and woodpeckers) for sharks, especially baby ones.

The bird migrations happen to coincide with tiger shark births in the Gulf of Mexico. Nearly half of the sharks with avian remains in their stomachs were newborn sharks, the team found. The finding suggests baby tiger sharks take advantage of the easy and abundant prey.