Popularity is a fickle thing. Styles, products, social movements and people can be bathing in the spotlight one day and languishing in obscurity the next. And according to a new study, things that catch on most quickly are also abandoned most easily - the faster the rise to prominence, the steeper the fall from grace. 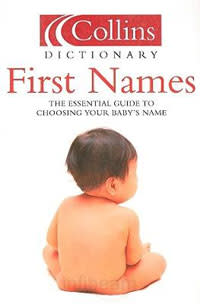 Many researchers have looked into the reasons behind the success of cultural tastes, but Jonah Berger and Gael Le Mens were more interested in the factors that drive them to extinction. To examine that, they looked at the changing popularities of first names in France and the USA over the last 100 years. They found that names that suddenly became popular lost their appeal just as quickly, while those that became more steadily used had more sticking power.

Charlene, for example, became slowly more popular from the turn of the 20^th century, peaked in 1950 and declined slowly after. Tricia and Kristi experienced faster rises in the 50s and 60s and fell equally sharply in the 70s and 80s. At their peaks, all three names accounted for around one in every 500 female births in the US, but Charlene had a much larger impact over time because of the slower pace of its change.

It seems that parents are (quite rightly) concerned that fad names will eventually be short-lived. As Berger and Le Mens say, "They may avoid such items to avoid doing something that may later be seen as a flash in the pan." Of course, that very concern ensures that fast-rising items do become short-lived fads in a very self-fulfilling way. 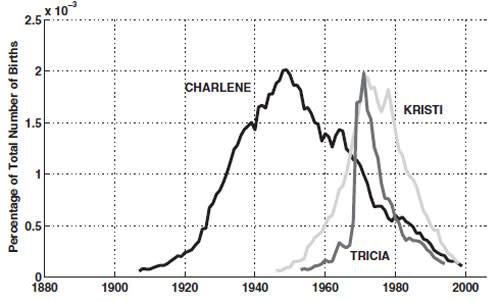 The duo chose first names because they're relatively sheltered from external influences. They're not promoted by large marketing budgets, and unlike technology, they're unlikely to die away as newer advances replace dated, obsolete ones. And more than most other cultural tastes, names carry weighty symbolic meanings but very little in the way of practical benefit.

Berger and Le Mens charted the rise and fall of over 2,570 French names and 1,000 American ones over the last century, and calculated which factors affected their "death rates". Surprisingly, female names were jettisoned from popular use more quickly than male ones, although the reasons behind this faster turnover are unclear. Names can, to some extent, become obsolete, for older names are slightly more likely to be abandoned quickly. And the more popular a name used to be, the more quickly it died away, showing that popularity can be a double-edged sword. Trendy items risk becoming overused to the point where their uniqueness, and thus their attractiveness, starts to fade.

But all of these were relatively small effects. By far the biggest influence on the rate of a name's decline was the speed at which it became popular in the first place. This factor shaped the fates of first names more than any other. It was even important for relatively obscure names, which shows that the trend isn't driven by the brief spotlights shone onto flavour-of-the-month celebrities. If one name rises to prominence 10% faster than another, you can predict that it will fall in popularity 12.5% faster too. 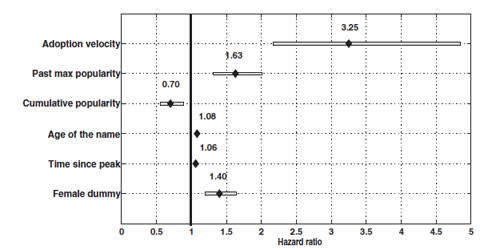 To find out why, Berger and Le Mens gauged the reactions of 661 expecting parents to a list of 30 names. They found that the parents were less likely to give their children names that had seen the sharpest recent rises in popularity, regardless of how popular the names were overall. This was mostly because they viewed these names as short-lived fads; when the duo adjusted their results for this perception, a name's rise in popularity no longer affected its attractiveness .

These results highlight the capricious nature of fame and popularity. Public concern that something's popularity is fleeting can make it seem less attractive, and ensure that its popularity actually is fleeting! It's a self-fulfilling effect - a meteoric rise to stardom can generate the very conditions that cause an equally swift downfall.

Obviously, this study only looked at one specific cultural taste, and the big question is whether the same trends apply in other areas. Do bands who spike in popularity experience the strongest backlashes? Are scientists more sceptical of fields of inquiry that become too hot too quickly? Are TV shows that slowly gain cult status eventually more successful than those that are temporarily all the rage?

As Berger and Le Mens themselves admit, marketing efforts and technology play a big role in cultural extinctions. But their work suggests that regardless of these external influences, newly popular items are swayed by internal forces that limit their own stay at the top.

They predict that these effects should be much stronger in areas like names, where cultural tastes are used to communicate our identity. The clothes we wear, the cars we drive and the gadgets we flaunt would fall into this category too, while our choice of refrigerator or bathroom tiles might not. You'd only get a backlash when there would be some sort of social stigma attached to copying a faddish trend. The effect may also be stronger for things like names or cars that aren't easy to change, as opposed to musical tastes, which are.

The answers to these questions have obvious implications for people who are trying to promote a certain trend, be it a style of clothing or a social movement. Conventional wisdom tells us that things that become popular quickly will end up being most successful, for they enjoy greater word-of-mouth, more people have heard of them and they can feed off peer pressure effects.

However, in the long run, their earlier death could end up making them less successful than competitors that enjoyed slower and steadier growth. Obviously, this won't apply to situations where something becomes so rapidly popular that it drives competitors into extinction (Blu-Ray anyone?). But in other scenarios where the playing field is more open, you might get more persistent success by "shepherding a consistent flow of new adopters".