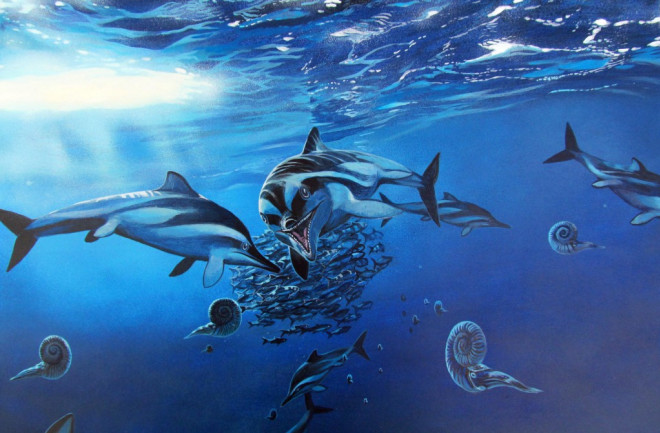 A provocative paleontology paper suggests researchers can be in too much of a rush to name new species from highly fragmentary fossils, citing traits in ichthyosaurs (above) that could be interpreted as natural variation within a species, rather than the defining characteristics of separate species. (Credit: James McKay)

In 2015, astrophysicist and science commentary go-to guy Neil Degrasse Tyson, flubbing an answer on a quiz show, quipped: “I love being wrong because that means…I learned something new that day.”

That’s my favorite of Tyson’s many memorable lines, and it’s one that I wish I heard other researchers express more often. Science at its best is about constant refinement and being willing to learn new things — even when the new evidence or hypotheses contradict what some researchers, out of ego, myopia or the power of conventional thinking, insist is truth.

Two paleontology papers published today, while not related to each other, offer a glimpse into how science can hit snags and what researchers can do to avoid them.

In Exhibit A, published in Geological Magazine, paleontologists Judy Massare of SUNY College of Brockport and Dean Lomax of the University of Manchester fire off a fresh salvo in one of the oldest debates in the field: the classic lumpers v. splitters kerfuffle, also seen in paleoanthropology.

Right now, Massare and Lomax caution, the field is at risk of excessive splitting. The fragmentary nature of nearly all fossil finds makes it particularly difficult to determine which individuals represent truly separate species.

Particularly difficult, and particularly tempting. Who doesn’t want to name a new species? It’s a way to make a name for yourself as well and, as a paleontologist once said to me years ago, only half-joking, it goes a long way towards making up for the low pay and long hours.

Of course, that’s a more cynical view of splitting. There are rational, logical arguments for classifying fossils into different species, but it can go too far.

Massare and Lomax looked at nearly 100 hindfin fossils from the six previously described species of ichthyosaurs, marine reptiles that were roughly contemporaneous with dinosaurs. The analysis uncovered significant variation from one specimen to the next, including within already established species. Had they classified the individuals solely on hindfin variation, they could have described up to 30 new species from that existing sample of 99 individuals.

So what to do? I asked Lomax via email for his thoughts on how paleontologists can move away from new species overload. Should, for example, researchers leave new fossils unclassified, or tentatively assigned to a genera, until a relatively complete specimen can serve as a holotype (the defining individual of a species)?

“I agree with this entirely,” Lomax replied. “When fragmentary fossils are found they should be examined and described (where necessary) because they can still offer important information, even if the species cannot be identified. Indeed, when there is no way of identifying what species the said fragmentary specimen belongs to, based on the lack of more complete remains, giving it a new species name should be avoided altogether until a relatively complete specimen can serve as a holotype. Otherwise, this leads to a whole host of problems.”

Problems, it should be said, that can be entirely avoided.

In the second paper out today, published in Palaeontologica Africana, paleontologist Christian Kammerer, a curator at the North Carolina Museum of Natural Sciences, takes another look at fossils originally excavated in the 19th century by an eccentric, enthusiastic amateur.

Englishman Alfred Brown spent years digging up fossils from the Karoo Supergroup in South Africa. The Karoo overall has provided paleontology with a wealth of information about several key periods within both the Paleozoic and Mesozoic Eras, including the late Triassic Period, more than 200 million years ago.

South Africa’s Karoo Supergroup has provided a trove of fossils from the Carboniferous to the Jurassic, including key periods of the Triassic. My friend and I were fortunate enough to visit part of the Karoo in 2017, even though I warned her, as a late Cretaceous critter, she had no business being in the area. (Credit: G. Tarlach)

For decades, beginning in the 1860s, Brown shipped his discoveries to various museums in Europe aaaaaand…crickets. Curators ignored or gently humored him, but with few exceptions his finds were generally consigned to the dustier corners of the institution’s archives.

In the 1950s, paleontologists uncovered a strange set of fossil footprints from the Karoo, which seemed to belong to a dicynodont — a large, tusked and beaked plant-eater that might, from a distance, be mistaken for a misshapen rhino. The problem was, dicynodonts were thought to have gone extinct by 210 million years ago, and much earlier in the Southern Hemisphere, and these trace fossils were younger by several million years. Surely the footprints weren’t what they seemed to be.

Kammerer, however, recently combed through some of the forgotten fossils Brown sent to Vienna in the late 19th century. And he discovered skeletal evidence of the South African dicynodont was sitting on a shelf all along.

Although the fossils are not a complete skeleton, they appear to be from a single individual and include a partial jaw, partial limb bones and vertebrae. Enough of the animal remains to classify it as a species new to science, one Kammerer named in honor of Brown, who was nicknamed Gogga.

Pentasaurus goggai, the Late Triassic dicynodont from South Africa that many paleontologists thought couldn’t be. Well, it was. And it’s been sitting on a museum shelf for more than a century. (Credit: Christian Kammerer)

Pentasaurus goggai is important for a few reasons. It’s hard evidence (literally) that dicynodonts survived longer than thought, co-existing with dinosaurs. It also reminds paleontologists that sometimes “out of place/can’t possibly be what they look like” fossils, particularly trace fossils like footprints, can be exactly what they look like and shouldn’t be dismissed so quickly.

Also not to be dismissed: material languishing in museum back rooms that has never been analyzed. No doubt there are many more significant fossils, found decades and even centuries earlier, that are waiting to be found again, and this time appreciated for what they are.

Kammerer and a colleague put together a fun little video that clocks in at a minute and change, hitting the highlights of the paper.

Right about now, some of you might be kvetching that I should practice what I preach, that first and foremost I should embrace the “truth” that tyrannosaurs all had feathers, even adult T. rex. I know; I still get furiously incoherent emails about my 2017 post on the topic. Okay, maybe I shouldn’t have dared to joke about feathered dinosaurs, given how sensitive some people apparently are about them.

But here’s the deal: when I studied paleontology, back in the Early Calabrian (haha, chronostratigraphic jokes are the best!), I was taught that the term “tyrannosaur” applied to the tyrannosaurids but not the tyrannosauroids. (It’s a distinction I made pretty clear in the original post, but never mind…)

I checked with a few practicing paleontologists in the aftermath of the feathered tyrannosaur dust-up and the consensus was that is still an acceptable view, although the precision of the term “tyrannosaur,” never great to begin with, has gotten even messier, and some people, among them some paleontologists, would consider tyrannosauroids (including feathered Yutyrannus) as tyrannosaurs.

Fair enough. There is still no evidence that tyrannosaurids had feathers, which was the point of the post. But, as I noted when replying to one of the commenters, if paleontologists do one day turn up a T. rex with feathers, I will happily blog about it and love that I was wrong. Because it will mean I learned something new that day.

This post is dedicated to the memory of Stephen Hawking. Stay curious, my friends.