Aviation Research, for the Birds 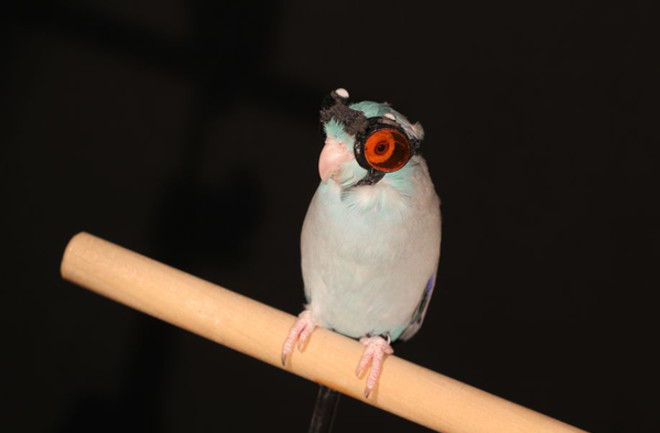 The fearless research subject, ready for flight. (Credit: Lentink Lab/Stanford University) Sometimes, it takes a goggle-wearing parrot to show us where we went wrong. A study from researchers at Stanford University suggests that our previous models of lift, as they pertain to animals, are all incomplete, based on observations of an intrepid parrotlet in their laboratory. Flying through a sheet of illuminated aerosol particles, the avian aviator pushed through the boundaries of our current understanding of wake dynamics, hinting that there is new ground yet to be broken.

The Stanford researchers were studying the way that air currents behave in the wake of the birds' wings. When wings slice through the air, they leave behind swirls of current, similar to the whirlpools that form when you push a canoe paddle through the water. In jet airliners, these vortices hang in the air for some time, often extending for over half a mile behind a plane. The same thing was assumed to be true for birds. Using an innovative experiment, the researchers show that this isn't the case at all — the vortices break up after only two or three wingbeats.

An experiment measuring the air currents created by planes clearly shows the presence of wake vortices. (Credit: NASA-LaRC/Wikimedia) To watch the air currents swirl and twist in real time, the researchers used a sheet of laser light and room filled with tiny (non-toxic) aerosol particles. They then had their parrotlet, named Obi, fly through the lasers, leaving a signature trail of eddying particles in its wake. The stylish aviator goggles protected Obi's eyes from potentially harmful laser radiation. A graduate student on the team fashioned them from 3-D printed frames and modified lenses. Videos of the moving particles allowed researchers to track the behavior of the wake vortices that Obi left behind as his wingtips cut through the air. They published their work Tuesday in the journal Bioinspiration and Biomimetics.

These vortices are important because they contribute to the drag on an aircraft, and can cause dangerous air currents at airports when planes land and take off near to each other. While the phenomenon is fairly well understood in planes, which are easy to study, it's more of a mystery in animals, whose wingbeats cause unpredictable currents. Many of our models of lift and flight come from animal studies; so if we want to get better at flight, we need to get better at studying animals. The Stanford team is particularly interested in using their findings to build better biomimetic drones. https://www.youtube.com/watch?v=OSAdkAI3hgc This experiment throws some cold water on long-held assumptions by showing that not one, but three different existing models failed to explain the way the air currents moved around the birds wings. Not only did the models indicate that the vortices should have been there, but their predictions of how much lift should be generated were also too low. They confirmed their calculations by measuring the actual lift Obi produced using a custom-made sensor. By conducting further studies of birds, the researchers hope to refine their models and better understand what truly happens when wings slice through the air. For now, it looks like Obi has many more flights to look forward to.