The autism spectrum disorders (ASDs), including autism and its milder cousin Asperger syndrome, affect about 1 in 150 American children. There's a lot of evidence that these conditions have a strong genetic basis. For example, identical twins who share the same DNA are much more likely to both develop similar autistic disorders than non-identical twins, who only share half their DNA. 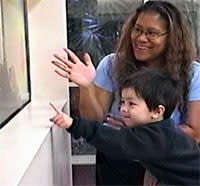 But the hunt for mutations that predispose people to autism has been long and fraught. By looking at families with a history of ASDs, geneticists have catalogued hundreds of genetic variants that are linked to the conditions, each differing from the standard sequence by a single 'letter'. But all of these are rare. Until now, no one has discovered a variant that affects the risk of autism and is common in the general population. And with autistic people being so different from one another, finding such mutations seemed increasingly unlikely. Some studies have come tantalisingly close, narrowing down the search to specific parts of certain chromosomes, but they've all stopped short of actually pinning down individual variants.

This week, American scientists from over a dozen institutes have overcome this final hurdle. By looking all over the genomes of over 10,000 people, the team narrowed their search further and further until they found not one but six common genetic variants tied to ASDs. This sextet probably affects the activity of genes that connect nerve cells together in the developing human brain.

At the head of a 56-strong team, Kai Wang, Haitao Zhang and Deqiong Ma scanned the genomes of people from two different samples. The first was a group of 3,100 people from 780 families, all of whom had a history of ASD and at least two autistic children. The second included over 1,200 people with ASDs and about 6,500 normal people without any sign of the disorders.

The team looked at over half a million possible genetic variants in the DNA of all these people and found six that were consistently more common in people with autism than those without it. Each of these conveys only a small risk of developing autism, but they are common enough to make their influence felt in the wider population. In fact, they may play a part in around 15% of autism cases.

All of these variants hailed from the same location, a short stretch of DNA on the fifth chromosome that contains no genes itself, but sits between two of them - CDH9 and CDH10. Both are members of the cadherin gene family, which produce proteins that sit at the surface of cells and help them stick together. When brain cells develop, the cadherins are involved in creating synapses, the junctions between neurons that carry signals from one to another. As such, these genes are incredibly important for the correct development of neurons and indeed, they're only activated at very low levels in other types of cells.

The variants that Wang, Zhang and Deqiong identified sit within a "gene desert". None of them form part of any actual genes. Instead, the researchers believe that they may be part of sequences that control how surrounding genes - like CDH9 or CDH10 - are activated or used. CDH9 doesn't appear to be strongly activated in the brain, but CDH10 is a different story. When a foetus is just 5 weeks old, CDH10 is strongly active in its frontal cortex. This part of the brain controls many of our higher abilities, including our social behaviour.

It's tempting to suggest that neurons fail to hook up properly with one another in brains that harbour these six mutations, because they disrupt the work of CDH10. That fits nicely with the results of brain-scanning studies, which have also found a dearth of neural connections in autistic brains.

It's more than likely that other genes involved in sticking cells together have a role in autism too. The team went back to their data and looked at genetic variants that are possibly linked to ASDs but didn't make the cut as strongly as the six they focused on. When they looked at the positions of this B-list, they found that many were associated with a group of 25 cadherins, and 8 genes from the neurexin family, another group that helps to glue neurons together at synapses.

The same researchers have also looked at parts of the genome that are duplicated or deleted from person to person. These "copy number variations" have been implicated in autism before and the team studied them in about 2,200 children with ASD and 2,500 without it. Again, they found many of these variants are linked to cadherins, neurexins and other genes involved in cell connections. Others belonged to the ubiquitin family, which are involved in destroying other proteins, including those that stick cells together.

Together, these studies have painted a wonderfully coherent picture, linking observations of genetics, brain development, and behaviour. The authors have understandably hailed the work as a major breakthrough in autism genetics. They're confident in their results, for this is the largest study of autism genetics to date, and every one of the six variants that the team identified was confirmed in two independent samples of people (including about 1,600 more cases of ASD between them).

It's also a big win for so-called genome-wide association studies, which try to look for scour the genomes of thousands of people for common genetic variants that increase the risk of disease. These studies have been recently pilloried for being wasteful and expensive (although ably defended by the excellent Daniel Macarthur of Genetic Future). But, as this work shows, massive studies like these are necessary. Autism-spectrum disorders are so complex that studying their genetics with smaller sample sizes would be like peering at a landscape through a keyhole.

Autistic children are less sensitive to the movements of living things