Attack of the pregnant cannibal fathers

For the pipefish (and their relatives, seahorses and sea dragons), it's the males who get pregnant. After a male fertilises the female's eggs, he takes them up into a special brood pouch and shelters them until the babies hatch from his pot-bellied stomach several weeks later. He may seem like a shoe-in for the Dad-of-the-year award but this fatherly commitment has a sinister side to it. Not all of the babies he cares for make it out of his stomach alive. 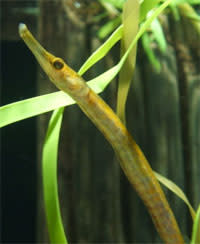 Gry Sagebakken from the University of Gothenburg has proved that pregnant male pipefishes absorb some of the eggs and embryos within their pouches. By secretly cannibalising a proportion of his brood, he gets an extra boost of nutrients. The young he carries around aren't just his next of kin, they're also ready-made snacks.

Previously, Ingrid Ahnesjo showed that male pipefish 'give birth' to fewer youngsters than expected. During his pregnancy, some embryos were clearly lost. To track the fate of these lost eggs, Ahnesjo and Sagebakken injected females with a mixture of mildly radioactive amino acids. These were incorporated into newly created proteins, including those within the female's eggs. Males were allowed to mate with both normal and irradiated females, so that half of the eggs in their bellies were radioactive and half were not.

They found that some of the radioactivity ended up in the male's own tissues, including his liver and his muscles. This was the answer to the mystery of the missing embryos - daddy absorbs them into their own flesh. The fact that his brood pouch is lined with tangled networks of blood vessels makes it easier to do this.

Others have suggested that the lost embryos are actually "nurse eggs", laid specifically to feed their siblings and act as their first meal. But not according to Sagebakken's experiments, which show no traces of radioactivite amino acids in the eggs that didn't contain them in the first place. The babies weren't absorbing their potential siblings.

Either way, this is a prime example of the sorts of conflicts that can arise between animal parents and their offspring. Humans may romanticise the role of fathers and mothers, but studies like this show that for many animals, their interests of parents and children are often not aligned.

Should a parent ensure their offspring's survival at the cost of their own health, or their chance to raise another generation? Should a youngster make demands on its parents for its short-term gain at the expense of a lower quality of care in the future? It's a fine balancing act, and one that leads many animal parents to thin the size of their broods, killing or even eating them.

These trade-offs depend on many things like the size of each generation, the quality of one's partners, the number of babies, the health of the parents, and so on. Sagebakken's next step is to see if the males cannibalise more of their brood if they're hungrier, and if the survivors actually benefit from their siblings' demise. She also wants to understand if the male pipefish actually kills some of his offspring or just recycles the nutrients from embryos that are already dead or dying.

Image: from Wikipedia by Tewy

HealthGreen Spaces Are a Necessity, Not an Amenity. How Can Cities Make Them Accessible to Everyone?
Recommendations From Our Store