Attack of the cloned soldier worms 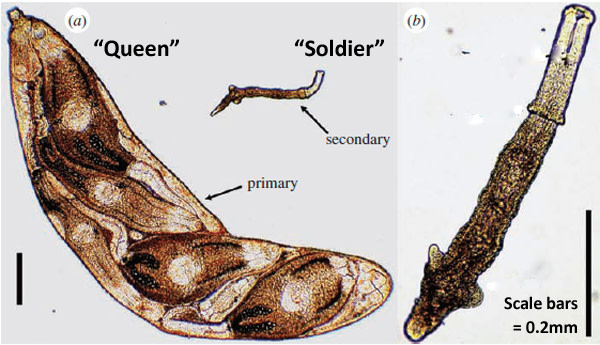 In the body of a snail, a war is waging. It’s so violent that the only reason there isn’t blood everywhere is that the combatants don’t have any blood. The fighters are flatworms, simple parasites that have taken over the snail. Its body is now theirs, a shell in which they mate, cooperate, and produce more flatworms. But they don’t have it all to themselves - other colonies, and even other species of flatworms can invade the same snail. When that happens, war breaks out and the flatworms wage it with something more commonly associated with ants or humans - a caste of soldiers. Many animal societies have specialised castes that do different jobs. Ants, for example, have soldiers who defend the nest, workers who perform menial jobs, and queens who reproduce. Humans too divide our labour among hundreds of occupations. But until now, the idea of such a division of labour among flatworms would have been laughable. These are creatures that are difficult to imagine living in a colony, much less in an organised one. The trematode flatworms, or flukes, are so simple that they have no blood vessels or special breathing organs. They have only one opening to their bodies, so their mouth is also their anus. They usually live solitary lives but once a larva infects a host, it repeatedly clones itself to form a colony. At its peak, this writhing mass can take up more than 40% of a snail’s tissues. The colony lives together for years, driving around their snail vehicle. But even though the colony consists of clones, they’re not all the same. Ryan Hechinger from the University of California Santa Barbara noticed that some trematode species come in two types – a large “primary” class, and a much smaller “secondary” one. The primary flukes are like fat, slow-moving slugs, while the secondary ones are tube-like, active versions – sixty-four times smaller, but five times faster. Despite this size difference, the secondary group have large muscular mouths that are the same size as the primary ones. These are weapons. To his shock, Hechinger saw that this second group uses their jaws to rip open invading trematodes from other colonies. They’re soldiers. Hechinger found that the soldier class is always much smaller than the primary one, the size of a finger compared to an arm, and there are few individuals of intermediate size. This, combined with their distinctive shape, suggests that the soldiers aren’t just young versions of their bigger colony-mates. When Hechinger pitted soldiers against other flukes, he found that they would only attack those from other colonies or species – they left their own sisters unharmed. When they attack, they make good use their powerful jaws. Other soldiers are ingested whole. The larger flukes get their bodies lacerated and their innards sucked out. The pictures below show examples of the carnage. In (a) and (c), a soldier is swallowing the soldier of another species of fluke. In (e) it’s swallowing the soldier of a different colony, and the black arrow shows where the body of the vanquished soldier filling up the attacker’s guts. In (b) and (d), a soldier has used its jaws to lacerate the side of a ‘queen’ and is swallowing her innards. In (b), the attacker has actually swallowed some of its prey’s offspring (the black dots are their eyes). 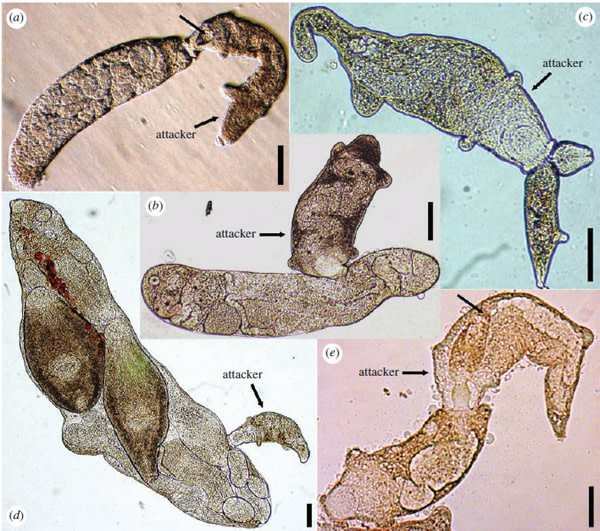 These soldiers do virtually all the defence in the colony, and they never reproduce. Not a single one had an embryo in its body. The large primary forms – effectively, the queens – can attack but they rarely do so, focusing all their efforts on reproduction. Virtually all of them were writhing with embryos. These flatworms clearly had different castes but in some colonies, such as those of various aphids, castes are separated in time. Individuals may take up a specific role at one point in their lives only to switch as they mature. That’s not the case here. Hechinger found that there’s actually very little turnover within the snails – the flukes don’t die inside their host, and the colony grows by piling on extra members. There are no roles for the soldiers to mature into. The castes are, however, separated in space. The queens live in the snail’s genitals, while the soldiers live far away in the mantle, the place where other flukes are likely to enter. These soldiers are stationed at the ideal spot for fending off invasions. In many ways, they’re like the colony’s immune system. They protect the body (admittedly, the usurped body of the snail) from invaders in the same way that human white blood cells do. This need to defend a fortress is something that the flukes share with other more complex animals that also employ soldiers within a caste-based society. In all these cases, there’s a central, all-important resource that the colony lives in and must defend. For social aphids, it’s a gall, a growth on a tree; for termites, it’s a patch of wood or a nest; and for the trematodes, it’s the body of a snail. Within this fortress, colonies of closely related individuals are clustered together. Any single fluke can ensure that its own genes are passed on to the next generation by helping its clone siblings, so it pays to cooperate. Hechinger did most of his work on a species of trematode called Himasthla, but he thinks that soldiers are common across the group. Many other species share the same snail-hijacking lifestyle of Himasthla, and scientists have found large and small varieties in some of them. And Hechinger has personally seen soldiers in five other species of trematode, which infect snails from North America, Japan and the Persian Gulf. With 20,000 species of trematode, who knows how many microscopic wars are raging on without us knowing? Update: There's now a video courtesy of New Scientist, and Carl Zimmer points out a wonderful case of convergence - the larvae of some parasitic wasps also have soldiers that do battle inside caterpillar hosts. Reference: Proc Roy Soc B http://dx.doi.org/10.1098/rspb.2010.1753More on flukes: