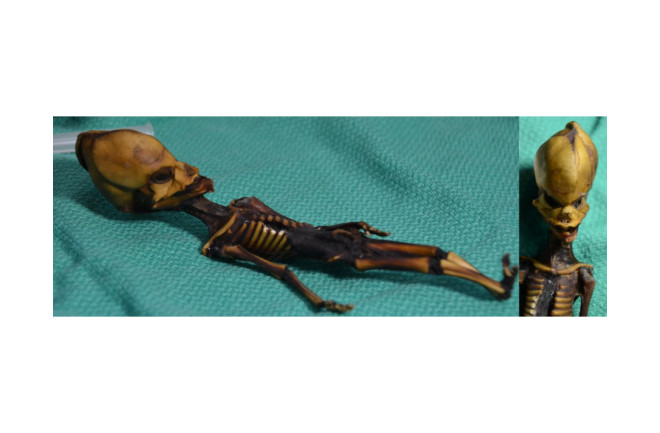 Smaller than a Barbie doll, with an elongated skull and other anomalies, the mummified skeleton known as “Ata” was found in an abandoned mining town in Chile’s Atacama Desert in 2003. And since then, there has been no shortage of theories about the individual, many of them suggesting an otherworldly origin. A study out today answers several of the questions swirling around the remains.

You may have become acquainted with the Atacama “alien” through 2013’s Sirius, which focused on assorted UFO and alien-centric conspiracy theories. Stanford University researcher Garry Nolan and colleagues subsequently did an examination and some DNA analysis on the skeleton and established it was human, though at the time they were unable to explain its size and other multiple physical anomalies.

One of the mysteries about Ata was her size (yes, she was female), especially after earlier bone age analysis suggested the individual was 6-8 years old at time of death. Another striking aspect: the skeleton appeared to have turricephaly, or an elongated, cone-shaped skull. Among the less immediately obvious anomalies, Ata had 10 pairs of ribs instead of the usual 12.

Deciphering her DNA through sequencing revealed novel mutations in several of Ata’s genes, specifically COL1A1, COL2A1, KMT2D, FLNB, ATR, TRIP11 and PCNT. Although her particular suite of variants is unique, previous research, not related to Ata, has linked the genes themselves with “diseases of small stature, rib anomalies, cranial malformations, premature joint fusion and osteochondrodysplasia (also known as skeletal dysplasia),” according to the authors of today’s study.

Based on genetic evidence of apparent premature bone aging, the authors now believe Ata was “a pre-term birth” rather than a child.

As part of the whole genome sequencing, the team was able to determine Ata was probably of Chilean descent, based on specific signatures in her genome. The researchers used a number of different data sets, including from the 1000 Genomes Project, to discover her closest genetic kin: three individuals from Andean Chile.

The timeframe for Ata remains a question mark. Researchers sought to answer it by determining the amount of degradation in her genetic material. As soon as an organism dies, microbes and other contaminants start turning up, which over time degrade the DNA. Based on known rates of that decay, the team estimated an age of less than 500 years for the remains.

Ata was found, note the researchers, in La Noria, a now-abandoned 19th century nitrate mining town. It raises the possibility that exposure to nitrate in utero may have led to the novel mutations seen in her DNA.