At the Bottom of the Ocean, a Surprising, Gloomy Discovery 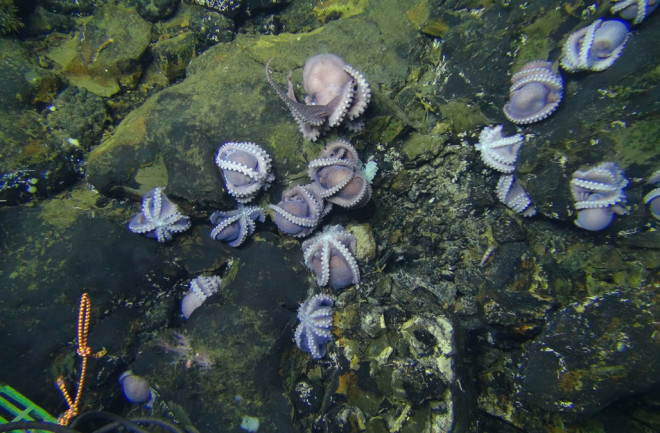 Almost two miles below the surface of the Pacific Ocean, on a lonely outcrop of bare rock 100 miles from Costa Rica, researchers on a geological expedition found something odd. As their remotely controlled submersible sunk through the black waters toward the seafloor, they saw a collection of purple lumps dotting the rocky bottom.

As they got closer, they resolved themselves into something resembling a bowling ball with suckers. It was a group of female octopuses, of the genus Muusoctopus, guarding clutches of eggs they’d carefully attached to the cracks and crevices snaking across the seafloor.

It was odd, but the scientists weren’t there to admire the sea life. Led by geochemist Charles Geoffrey Wheat, the expedition was searching for warm seeps on the ocean floor, places where heat from Earth’s interior bleeds out through networks of cracks. Cooler, and less chemically rich than hydrothermal vents, the seeps are still little-studied and could host new and strange collections of undersea life.

The scientists had found their mark, but it was covered in octopuses. They managed to get observations anyway, probing and poking around the observant mothers, and returned the next year, when they saw the same thing. Octopus moms had colonized the areas around the warm seeps.

The observation of octopuses this deep would have been no more than a passing curiosity had Janet Voight, associate curator of zoology at Chicago’s Field Museum, not seen the footage. She was surprised, to say the least.

“This just blew me away,” Voight says. “At 3,000 meters, there’s like four observations, and I’ve made three of them.”

Finding so many of these octopuses in one place at that depth was a revelation. But, as Voight soon found, it was also a tragedy.

A female octopus’ death is written into her genes. Octopuses only breed once throughout their lives, and the mothers-to-be die once their task is complete.

After laying a clutch of eggs, and attaching them to a sturdy substrate with tough biological cement, female octopuses have but one task left to them. They brood their eggs with a ferocious singularity of purpose, and once she has laid her eggs, a female octopus will not leave until they hatch. This can take months, in some cases years.

But the suicide mission is not without merit. In the cold waters where most octopuses live, life moves slowly. Young octopuses need time to develop from helpless embryo to self-sufficient juvenile. The ultimately fatal vigil an octopus mother keeps buys precious time for her vulnerable young.

It’s a tradeoff: By fixing their eggs to the bottom, and laying their lives on the line, octopus moms ensure that they’ll always be near to their babies. But once the eggs are laid, the octopuses’ wandering days are done. They stay in that spot until they die. If she has picked a spot that’s less than ideal, there’s no going back.

Tethered to Their Fate

For the more than 100 Muusoctopus that had turned the pillow basalt near the warm seep into a nursery, their decision would prove deeply unlucky. The water that trickles from deep below is both relatively warm and oxygen-poor, a combination that is ultimately deadly for developing young. The warmth speeds up cellular processes, hastening development, but also increasing the demand for energy.

“As the embryos start to develop from fertilized cells, they’re increasing their oxygen use … and they’re confronted with less oxygen available,” Voight says. “I don’t see how they can possibly survive.”

Of the 186 eggs Voight examined on camera footage, not one had a developing embryo inside. For a creature that goes to such extreme lengths to protect its young, the behavior was puzzling. Why set themselves to a task that will ultimately kill them if it’s doomed from the start?

A clutch of eggs is made visible after a brooding octopod shifts her position. (Credit: Screenshot from ALVIN footage by Anne M. Hartwell)

A clutch of eggs is made visible after a brooding octopod shifts her position. (Credit: Screenshot from ALVIN footage by Anne M. Hartwell)

Voight thinks that the answer lies in the unpredictable nature of the seeps. They don’t always spew warm, embryo-killing water — in fact, sometimes the seeps can be deceptively silent. When female octopuses happened upon the bare rock uncovered by the seeps it would seem like a perfect place to brood eggs. But at some point over the course of the months the females would spend there, warm water inevitably began to seep through.

Temperatures at the ocean floor usually hover just above freezing, but the researchers measured water at the seeps at around 50 degrees Fahrenheit — cold to us, but dangerously hot to an octopus. Because they’ve lived down deep for so long, these octopuses have likely lost the ability to thermally regulate their bodies, Voight says. The adult Muusoctopus might actually be doing OK, she thinks, because they’re tall enough to rise above the layer of warm water. Their eggs, stuck fast to the rocks, aren’t so lucky.

It’s a sad tale, to be sure, but all Muusoctopus probably don’t share the same fate. If all of the octopus eggs are dying, there’s no way there could be such a large population down there, Voight says. In all likelihood, the group the researchers found represents just an unlucky few, the researchers say in a paper published in Deep Sea Research Part I: Oceanographic Research Papers. The seafloor in that area is riddled with fissures and caves perfect for egg-laying, many of which don’t lie near the warm seep. Healthy octopus babies likely frolic beneath the waves as well.

Indeed, the researchers report seeing telltale arms waving from hidden clefts, hinting at the eight-armed denizens below, although they weren’t able to get close enough to see if the occupants were guarding any eggs.

Sad though the discovery may be, for the researchers, it’s another reminder that the deep ocean is a wellspring of fascinating discoveries.

“There are things in the deep ocean even the experts, and I’m supposed to be an expert in this, haven’t even imagined. And we need to find out what’s down there,” Voight says. “Because if we couldn’t even imagine that a cluster of brooding octopuses like this existed, what else is there that we haven’t even considered?”