At Age 65, Wisdom the Albatross Hatches a Healthy Chick 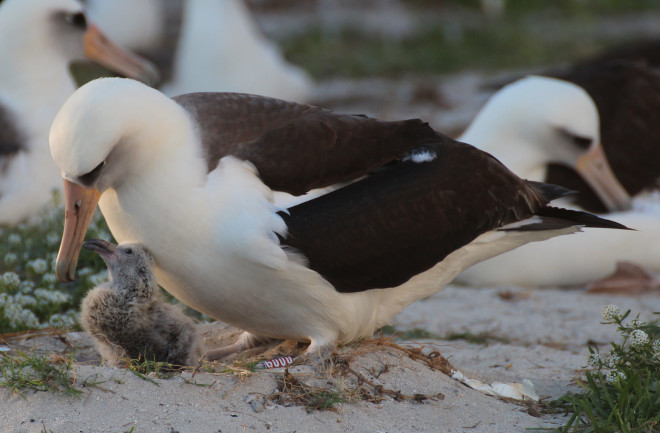 Wisdom's mate cares for the newly hatched chick, named Kūkini. (Credit: Kiah Walker/USFWS Volunteer) The oldest known wild bird continued her reign as the world’s most aged avian mother. Wisdom, a Laysan albatross nesting at the Midway Atoll National Wildlife Refuge, laid an egg back in November that started hatching on Feb. 1 while under the care of her mate, according to the the U.S. Fish and Wildlife Service. It's estimated that this is the 40th time 65-year-old Wisdom has brought a new life into the world, and her chick was named Kūkini — Hawaiian for messenger.  Wisdom returned from one of her solitary hunting trips, which can last up to a month, several days after Kūkini hatched. Wisdom took over care of the chick, regurgitating her catch of squid and fish to nourish her offspring. “Wisdom is an iconic symbol of inspiration and hope,” noted Robert Peyton, refuge manager, in a news release this week.

While albatrosses are famously long-lived, regularly reaching ages of over 50, Wisdom continues to push the boundaries of our understanding of these birds. Wisdom's latest hatched chick breaks the record for oldest bird mother, which she set back in 2013. In 2014, the egg she and her mate were incubating disappeared mysteriously.

Wisdom incubating her egg in this photo from December 2015. (Credit: Dan Clark/USFWS) Wisdom was banded back in 1956 by biologist Chandler Robbins, and he kept tabs on her through the decades that followed; at the age of 97 he still returns to the atoll occasionally for a visit. Wisdom's exact age is still unknown. When Robbins tagged her in 1956, she was a mature adult — at least 5 years old, but there's a good chance Wisdom is even older than 65. Where the Albatrosses Dance While Wisdom and Kūkini may be a special case on the atoll, they are far from alone. Nearly 1 million albatrosses return to the refuge in November to commence their annual breeding ritual.The atoll is covered with birds dancing and hollering as they attempt to attract mates or find their devoted partner — albatross pairs often mate for life. Following the November 2015 courtships, the birds built 470,000 nests to incubate their eggs.

Midway Island during albatross breeding season. (Credit: Dan Clark/USFWS) After an egg is laid, the incubation period lasts for a little over two months, during which the bird couples share hunting and nest-guarding duties. After the chicks hatch, they must be fed and kept warm for several more months while they mature. After they are strong enough to hunt by themselves, albatross leave the atoll and range far over the Pacific Ocean in search of food, primarily squid, but also other cephalopods and fish as well. Albatross can glide hundreds of miles a day while hunting, taking advantage of warm air currents and a six-foot wingspan to hold them aloft with little effort. While hunting, albatross rarely touch land, covering up to 10,000 miles in a trip — even sleeping in mid-air. The Fish and Wildlife Service estimates that Wisdom has covered some 3 million miles in her lifetime. Part of the Papahānaumokuākea Marine National Monument which covers a series of atolls to the north-west of Hawaii, Midway atoll is best known as the site of a pivotal battle in WWII which turned the tide of the war in the Pacific. Now, the atoll teems with wildlife, most notably albatross, although dolphins, sea turtles and other sea birds are found on and around the refuge as well. You may have noticed that Wisdom's mate has no name yet. As befitting his newfound fame, the refuge is holding a contest to bestow upon him a proper name. The four options to choose from are: Ahonui, Endurance, Popsicle or Akeakamai. You can also email your choice to Ann_Bell@fws.gov.