Asymmetrical brains help fish (and us) to multi-task

As you read this post, your computer is probably busy. You may have multiple programs running in the background, with email clients, anti-virus software or file-sharing software all competing for valuable memory. The ability of computers to multi-task has grown substantially in recent years, as processors have become increasingly powerful. 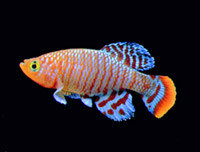 Evolution has chartered a similar course, and humans are particularly talented at dividing our attention among multiple priorities. Now scientists are showing that the asymmetrical differences between the two sides of our brain are essential for this ability to multi-task.

In the animal world, the ability to multi-task is a matter of life and death. Many species must be ever-watchful for food, while simultaneously looking out for predators who would view them in the same way Like too many open applications that slow down a computer, these multiple tasks compete for the brain's finite resources. Those who survive life's challenges are those with an edge at efficiently dealing with multiple demands.

One way of doing this is to use parallel processing - to delegate different parts of a problem to different pieces of hardware. This is exactly the situation found in the human brain, with two asymmetric hemispheres associated with different mental abilities. And this 'lateralisation' is not unique to us, but seems to be present in all back-boned animals, from fish to apes. An explanation for this asymmetry now becomes obvious - it may allow animals to multi-task, acting as a sort of cerebral division of labour.

Marco Dadda and Angelo Bisazza at the University of Padova decided to test this idea, by looking at small freshwater fish called killifish. They bred different strains of this species with either symmetrical brains or asymmetric 'lateralised' ones. The fish were kept in a special tank consisting of two parts separated by a trap door. In one half - the 'feeding zone' - the researchers placed a live brine shrimp for the fish to eat.

Both strains were equally adept at catching the shrimp, but the lateralised strain gained a massive advantage when a predator was brought into play. Dadda and Bisazza occasionally placed a tank containing the larger predatory pumpkinseed sunfish in front of the feeding area, so that any killifish swimming across found itself face-to-face with a threat. When this happened, the symmetrically-minded ones took twice as long to catch their meals, but their lateralised peers took barely a second longer.

When the fish had to divide their attention between watching the predator and catching the shrimp, the lateralised brains acted as parallel processors, allowing them to cope with both tasks simultaneously.

Dadda and Bisazza confirmed this interpretation by carefully watching the fish as they swam after their meals. Killifish catch their food by approaching from the side, using one eye to monitor the prey. In the absence of the sunfish, they were equally to strike from either side. But with the predator around, in 7 out of 10 times they snapped at the shrimp on the same side, watching it with one eye, and the predator with the other.

The pros and cons of asymmetry

In the case of the killifish in this experiment, partitioning roles to different parts of the brain seems to have brought clear benefits. But Dadda and Bisazza are quick to point out that the situation in the wild is less obvious. In many cases, species with lateralised brains show lateralised behaviours, preferring to turn, keep watch or catch prey on one side of their body. Their other side is less often guarded, and natural selection penalises them for it by producing predators that prefer to approach from the unguarded side.

In these cases, regardless of parallel processing power, an asymmetric brain is clearly a disadvantage. The two scientists believe that the tipping point between these pros and cons comes when an animal has to perform difficult mental tasks.

Other studies have shown that asymmetrical brains endow wild chimpanzees with superior termite-fishing skills, and (equally wild) human children with better mathematical and verbal abilities than their classmates. It may be that over the course of evolution, our brain's halves started to work together more effectively as they became more different and specialised. It is ironic and sad then, that the opposite seems to hold true for the divergence of human cultures.