Astronaut Taste Test: The Truth about Water from Recycled Urine and Sweat 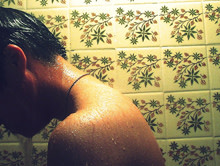 The Endeavor shuttle shot into space last week carrying loads of fancy equipment for the International Space Station. Among the new gadgets to be installed is a water recovery system that promises to recycle 93 percent of astronaut urine, sweat, exhaled water vapor, and other waste water back into drinkable water. The whole shebang cost about $250 million to develop, but that's still cheaper than having to send periodic shuttles to the station to deliver fresh water. Of course, the question on everyone's mind is, what does it taste like? New York Times reporter John Schwartz took it upon himself to find out. He went to the Kennedy Space center where NASA officials offered him a bottle of water made from a 2005 prototype of the system. (The scientists generously "donated" their own liquids for the test run.) The label on the bottle read, “We use only the finest ingredients! Urine, Perspiration, Food Vapors, Bath Water, Simulated Animal Waste, and a touch of Iodine. No Carbs or Calories Added.” And Schwart's verdict? "Aside from a slight tang of iodine, it tasted like, well, water. I’ve had tap water that tasted much more like things I don’t want to think about," he reports. The iodine is added after the distillation process to kill germs and help preserve the water. In space, the iodine can be removed before the water is used for drinking. Not convinced? Astronaut Sandra Magnus, who's blogging from space, says it's only the immediacy that's disconcerting. She points out that we drink recycled water here on earth everyday—it just takes longer to go from toilet to tap. Related Content: Discoblog: International Space Station Gets New Toilet, Fridge, and Blogger 80beats: Oopsy: Astronaut "Drops" Tool Kit During Space Walk 80beats: Shuttle Crew Prepares to Start Space Station Home Improvements