The new eruption on La Palma continues to roar with a mix of lava flows and more explosive eruptions that are making life difficult on the island. 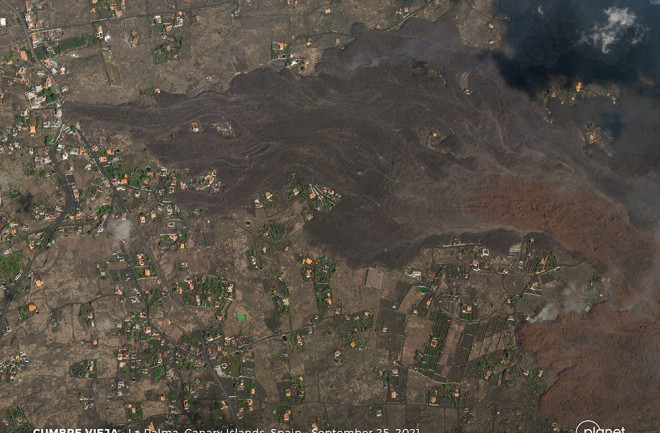 The eruption of Cumbre Vieja on La Palma in the Canary Islands has kept volcanologists monitoring the volcano on their toes. Over the past week, multiple vents have opened on the volcano and the eruption has oscillated between calmer lava flows and more explosive lava fountains. Even though the eruption is still going strong, authorities are beginning to let people back into areas that don't appear to be in the path of the continuing lava flows.

The main lava flows stretch up to almost 2 miles (3.5 kilometers) to the west of the vent, with a more active northern flow and more sluggish southern flow. The Planet image captured on September 25 (above) shows the lava flow field as it paved over neighborhoods near Cumbre Vieja. Since the eruption began, it has covered at least 640 acres (2.6 square kilometers) and dumped over 1 billion cubic feet (31 million cubic meters) of lava. That's roughly 300,000 tractor trailers worth of molten rock.

Annotated version of the September 25, 2021 Planet image of the lava flows on La Palma. The dashed lines mark the lava flows I could identify on the image and the direction the flows are moving. Credit: Planet, used by permission and Erik Klemetti (annotations).

The lava flows show many of the typical features you'd expect from these basaltic lavas -- lava channels, levees on each side of the flow, arcuic pressure ridges down the middle of the flow and places where the lava spreads out as it hits flatter ground (lava deltas). If you can this image with those from the 2018 Kilauea eruption, you can see how similar they are, although the La Palma lava appears to be more rubbly a'a than the runnier, ropey pahoehoe that dominated at Kilauea.

As it is with many lava flows, one house can be completely destroyed and buried while its neighbor is just fine. Some can even be surrounded by lava flows on "islands" of unaffected land called kipukas. You can see a few in the Planet image. They might have been on areas slightly higher than the surroundings or just got lucky. In other places, houses and roads have been buried by up to 40-160 feet (12-50 meters) of lava.

The more explosive side of this eruption has caused air travel disruptions for La Palma. The ash from lava fountains is being blown to the east of the island (see Landsat-8 image below), stranding aircraft and leading people to seek boats to leave La Palma. The ash and sulfur dioxide emissions aren't getting blasted high enough into the skies to likely cause problems outside the Canary Islands (although the sulfur dioxide has made it to Europe) or have any lasting impact on climate.

The dark ash plume from the La Palma eruption, seen by Landsat-8 on September 26, 2021. Credit: NASA/USGS.

The cones formed by the eruption continue to collapse and get rebuilt, which is typical for this Hawaiian-style eruption. These collapses can stop or start lava flows or intensify some of the explosivity of the eruption. However, they are not the sort of thing that can lead to the tsunami that some people are (wrongly) worried about happening.

It is still unclear just how long this eruption will last, but INVOLCAN has reported that volcanic tremor, typically caused by magma moving into the upper parts of the volcano, has dropped significantly on September 27. Whether or not this means the eruption might wane remains to be seen.