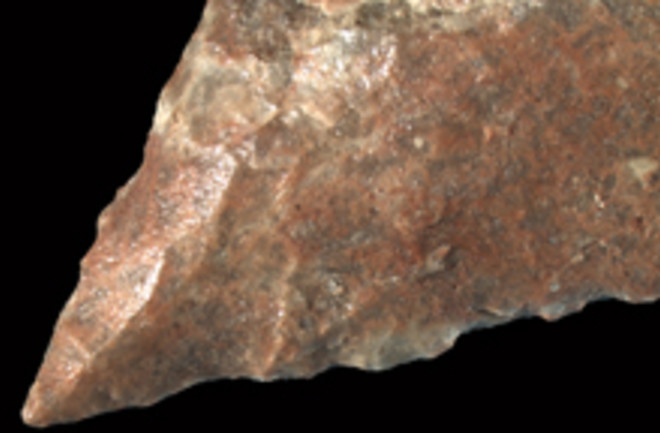 A bountiful archaeological site in South Africa has given up another discovery showing humans becoming sophisticated tool users. According to a study out in the journal Science, 75,000-year-old artifacts in the Blombos Cave appear to show signs of pressure flaking, a process of finely shaping hard material. Before this, study author Paola Villa says, the oldest evidence of humans using the technique was dated to just 20,000 years ago.

Pressure flaking consists of trimming the edges of a finished tool by pressing with a bone point hard enough to remove thin slices of rock. This process creates the narrow, evenly spaced grooves found on flint tools from Europe’s 20,000-year-old Solutrean culture and prehistoric Native American groups. Wider, more irregular grooves characterize 36 pressure-flaked Blombos tools, which were made from silcrete, Villa says. This rock, a silica-rich material, is of lower quality than flint and requires heating to ready it for pressure flaking. [Science News]

It's not easy to tell from these artifacts whether their makers simply hammered them into shape or used the more sophisticated flaking method to polish them off. So the team, led by Vincent Mourre, found silcrete

around the cave site and tried to make their own.

Mourre himself then created replicas of the buried artifacts using two techniques: the earlier hammering method and the later method that used pressure flaking as a retouch after hammering. When Mourre and his colleagues compared the artifacts with the copies, almost three-fifths of the ancient tools showed marks of pressure flaking: They had thinner, straighter edges that could pierce deeper and last longer. [ScienceNOW]

he didn't necessarily agree that pressure flaking made these people's tools that much better. It could have been more a signal of skill—a Stone Age "Hey, look what I can do." But, he agreed with the study authors that humans were using creative techniques like pressure flaking much further back than they'd been getting credit for, and the method may even date back to 100,000 years ago.

"This finding is important because it shows that modern humans in South Africa had a sophisticated repertoire of toolmaking techniques at a very early time," said Villa. The authors speculated that pressure flaking may have been invented in Africa and only later adopted in Europe, Australia and North America. [AFP]

That's the key implication of studies like this one—that these kinds of skills emerged and diffused through early human cultures gradually, not all at once:

The finding fits with the idea that symbolic art, rituals and other forms of modern human behavior developed gradually over hundreds of thousands of years, not in a burst of cultural innovation marked by cave paintings and other creations that appeared after 50,000 years ago in Western Europe. [Science News]

DISCOVER: More Than a Pointy Rock