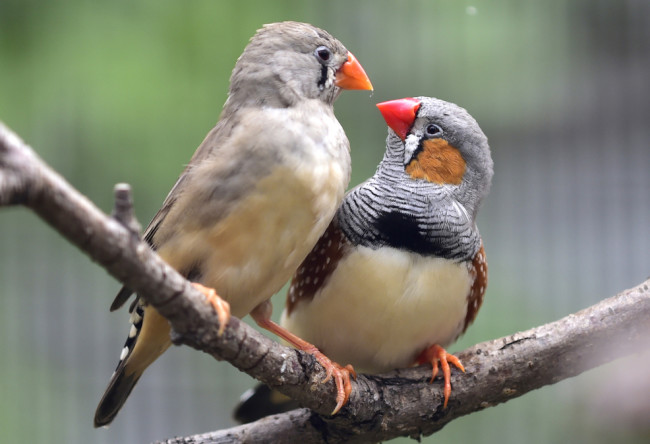 The Beatles famously taught us that love is all we need, and that’s appears to also be true for zebra finch families. On paper, reproduction is pretty simple: Find the partner with the best genes and make lots of babies. But we humans know that there’s a lot more to finding “the one” than simply a good set of genes. As it turns out, zebra finches too have certain tastes in a partner. And when they're allowed to pick a mate they're compatible with, they have more babies than when they are put in an arranged partnership.

Zebra finches have a lot in common with human couples: They are monogamous, and males and females share the responsibilities of raising their offspring. With so much on the line, female zebra finches are incredibly choosy when it comes to finding their partner. Unlike other animal species where, say, the biggest horns or flashiest feathers get the girl, there’s no clear consensus on which male zebra finches represent the Brad Pitts of the aviary, as each individual female has her own checklist. So is there a biological advantage to being picky, rather than just mating with a male with good genes? Researchers from the Max Planck Institute for Ornithology in Germany decided to test this question using a population of 160 zebra finches. Birds were placed into groups of 20 males and 20 females, allowing the birds to voluntarily pair up. Once the birds were paired, half of the pairs “lived happily ever after” and were placed together. The other half of the pairs were split up and reassigned a mate in a forced pairing. Each male in a forced pair had previously been chosen by a different female, which ensured that scientists weren’t pairing a female with a “reject” that no one wanted. Then, researchers monitored the birds' courting, mating and parenting behaviors.

Birds of a Feather

Scientists found that attraction matters. Bird families begun by pairs who chose each other fared much better. Offspring in voluntary couples had a 37 percent higher survival rate than offspring from forced couples. Birds in forced couples lost more eggs and had three times as many unfertilized eggs as voluntary couples. Most chick deaths from forced couples occurred in the first 48 hours after hatching, because males in these pairings tended to the nest less often during those crucial hours. Courting was also different between forced and voluntary couples. For one, males and females in forced couples didn’t synchronize their behaviors – like flying in similar paths. Females were far more receptive to advances from a mate they chose and they copulated more often. Infidelity was also higher in forced couples, as males literally strayed from the nest and mated with other females. Researchers published their findings Monday in PLOS One.

Researchers’ findings suggest that there’s a lot more to finding a mate than simply good genes. Zebra finches are looking for a mate that’s not only fit, but matches their personality. A good match increases the likelihood of copulating successfully, and the resulting offspring will actually be cared for. What, exactly, zebra finches are looking for personality-wise isn’t entirely clear, but getting along is certainly better for the children. The results from the zebra finch study tend to reflect similar studies in people. Some studies suggest people in love-based relationships are less likely to engage in domestic violence, are more satisfied and more committed to the welfare of their children. However, recent studies have also shown that love-based marriages fare no better than arranged marriages. Courtship is a seesaw between affection and rejection; finding true love is complicated. However, it seems as though there is a major biological benefit to all the formalities we call the dating game.