Arr, Matey! This Sea Scorpion Be A 'Primordial Swashbuckler,' Yarr! 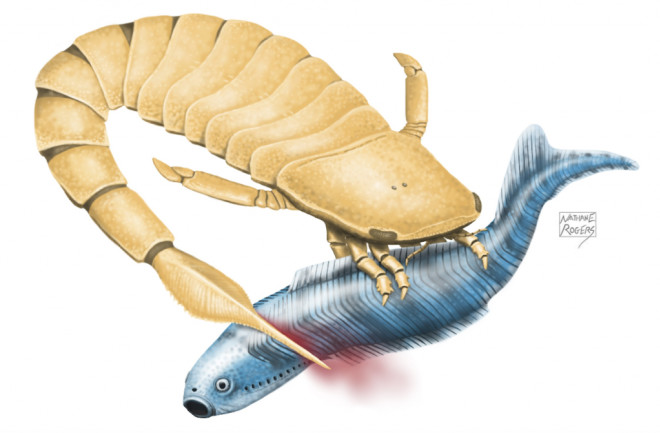 Sea scorpion Slimonia acuminata made fast work of its prey with a saber-like spine. (Credit Nathan E. Rogers) Be glad our species wasn't around some 400 million years ago...we would have had to contend with giant sea scorpions, some more than 10 feet in length and capable of prowling about on land in search of a meal. And that's not all: Researchers reveal that at least one of these Monsters of Deep Time had a particularly violent — and unusual — way of dispatching its prey. Published today in The American Naturalist, the spine-tingling tale of a stabby sea scorpion is straight out of an old-school monster movie. Or a monster pirate movie. Scott Persons, a University of Alberta paleontologist, describes the sea scorpion Slimonia acuminata as nothing less than a "primordial swashbuckler of the high seas." (One reason I always love hearing from Scott: He hasn't lost his delight in science, which can seem pretty scarce these days.) Persons and co-author John Acorn, also at U of A, believe the animal used a serrated spine to stab and slash its prey. Nasty way to go. The Story Behind The Stab The researchers took a fresh look at a 430 million-year-old specimen of S. acuminata from Scotland's Silurian period. Though the animal is known from other specimens, this particular one had a gorgeously preserved back half, including its telson, the final segment in the arthropod's body. Its telson is both pointy and serrated: the Ginsu II of the Silurian. But what's even more interesting about this particular specimen, MB.A 863, is that its back half is strongly curved to the left. Why is that a big deal? Well, because sea scorpions in general moved through water differently than the distant relatives you may be more familiar with, such as today's lobster. Crustaceans tend to have a lot of up-down flexibility in their back half, which they use for both forward and backward movement. The sea scorpions (more accurately known as eurypterids), don't have that same up-down swishiness. It's thought that they used their paddle-like appendages to get around in water.

Don't throw this shrimp on the barbie! For starters, it's not a shrimp, but rather the beautifully preserved back half of a sea scorpion that shows the animal was capable of moving its tail side to side in an extreme motion that may have been how it killed its prey. (Credit Scott Persons) Previous studies had noted some degree of side-to-side flexibility in the metasoma, or back half, of at least some sea scorpions, but researchers suspected that the animals used that movement as a rudder. However, no rudder would curve so dramatically. Persons and Acorn found that the extreme lateral flexibility of MB.A 863's metasoma, which has been found in a couple other sea scorpion specimens, would have allowed the animal, once it grasped prey in its clawed forelimbs, to stab and slash and slice up its meal.

A close-up of the business end of MB.A 863, including its saber-spine telson. (Credit Scott Persons) Bonus: the lateral curving of the telson to attack prey would have generated very little backward motion for the sea scorpion. It also would not have slowed S. acuminata down. In other words, the side-swinging saber would have been fast and efficient. Good for MB.A 863 and kin, not so good for anything swimming nearby.