Argentinian gulls are eating whales (or at least bits of whales) 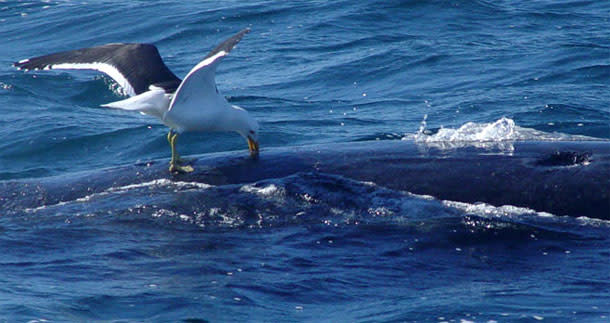 Like most seagulls, the kelp gull is an opportunist. It will catch fish and other small prey, but it’s not above scavenging at landfill sites. And off the southern coast of Argentina, some kelp gulls

have developed a taste for whale. Between June and December, Southern right whales gather to breed in the waters off Peninsula Valdes in Argentina, and every year, thousands of tourists go out to watch them. Kelp gulls are watching too. As the whales surface for air, the birds land and rip pieces of skin and blubber form their backs, inflicting gaping wounds up to 20 centimetres long. The whales violently arch their backs to submerge whatever they can below the water, before hurriedly swimming away. The first of these attacks was documented in 1972, and they have been getting worse. In 1974, just 1 per cent of whales had gull-inflicted wounds. By 2008, 77 per cent of them carried such injuries. It certainly doesn’t help that the gull population has exploded in the last 25 years, probably because human dumps and fisheries have provided them with a glut of food. The behaviour may also be spreading between the birds, with new individuals learning to peck the whales after their attention is directed to the blubbery buffets by their peers. Babies suffer most. A few years ago, Mario Sironi found

that mother-calf pairs account for 40 per cent of whale sightings, but 80 per cent of gull attacks. Ana Fazio from CONICET, an Argentinian institution, has now confirmed this trend. She spent more than 1,000 hours over three years watching the gulls and the whales, and found that most of the attacks were directed at mother-calf pairs, and most often at the calves – perhaps their rough skin makes for easier pickings. Fazio and Sironi both found that most of the attacks involved a single gull, which suggests that certain troublesome individuals may be behind much of the whales’ woes. That’s actually encouraging – it means that killing specific birds would greatly ease the pressure on the whales. But new generations may already have learned to feast on whale flesh. In 2006, just 4 per cent of the attacking gulls were juveniles, but that proportion rose to 17 per cent in 2007. The youngsters often attacked in groups, with as many as eight birds pecking one poor whale. Despite years of observations, no one knows whether the gull attacks are harming the whale populations beyond giving them some nasty sores. Certainly, the whale numbers are still going up, but it may take time before the true effects on these long-lived animals become clear. The whales spend around a quarter of their daylight hours fleeing from the gulls’ attacks, which could conceivably rob them of valuable rest, and soak up their energy reserves. This might matter most for the calves, who are also robbed of important chances to socialise with their peers. Fazio is also worried that the gulls could carry skin infections, implanting bacteria from rubbish dumps and sewers into the skins of their unfortunate victims. Local government authorities have recently decided to take action, prompted in large part by pressure from visitors and tour operators. They have kick-started a management programme