Are the Oldest Fossils Real - Or Just Rocks?

Scientists disagree about whether a sample of ancient rocks shows evidence of life. 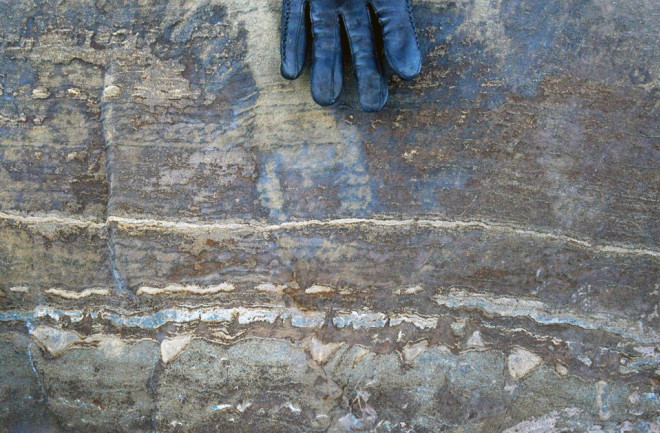 The triangular shapes at the bottom of this Greenland rock may be ancient fossils — or not. (Courtesy of Abigail Allwood)

It’s a matter of life or no life. In a 2016 Nature study, researchers reported finding fossils in 3.7 billion-year-old rocks in Greenland, pushing the timeline for Earth’s first preserved organisms back 200 million years.

But a 2018 paper, also in Nature, contended that the rock outcrop preserves no signs of life.

The dispute concerns inch-high layers of cones and domes embedded in a section of rock recently exposed by melting snow. The original team interpreted them as stromatolites, fossils formed in shallow seas when mats of microbes accumulate sediment and minerals. Elsewhere on Earth, stromatolites provide proof of bacterial communities as old as 3.5 billion years. But the Greenland humps are ambiguous. In Science Smackdown, we let researchers debate the evidence.

Leading the 2018 challenge is Abigail Allwood, who identified the oldest convincing stromatolites in Australia over a decade ago. After reading about the newest “oldest” fossils in Greenland, the NASA geologist wanted a look.

Allwood and colleagues visited the outcrop for a day of field observations. “We went open minded,” she recalls. But upon seeing the surrounding geology, they decided the rocks had been compressed one way and elongated another — “stretched out like chewing gum,” says Allwood. This formed features that resemble stromatolites, but only when viewed head on.

The Counterpoint: Life Was Once There

The original paper’s authors stand by their stromatolites. Led by geologist Allen Nutman of the University of Wollongong, Australia, they say Allwood sampled a poorly preserved section.

Nutman likens it to a rotting apple: “If you want to study what an apple actually is, you go look at the bits which are still fresh, not the bits which are starting to decay.” In the 2016 study, his team analyzed a well-preserved portion and found features resembling both kinds of stromatolite appearances (cones and domes of layered sediment) and composition (chemical elements consistent with seawater formation).

Nutman also notes that these ancient rocks are “some of the most complicated and messy in the world to study.” If a bunch of people fly in to examine them, he says, naturally “there would be controversy and disagreement.”

[This story originally appeared in print as "Are the Oldest Fossils Merely Rocks?"]