Are red autumn leaves a warning sign to insects?

Autumn is a time of incredible beauty, when the world becomes painted in the red, orange and yelllow palette of falling leaves. But there may be a deeper purpose to these colours, and the red ones in particular. In the eyes of some scientists, they aren't just decay made pretty - they are a tree's way of communicating with aphids and other insects that would make a meal of it. The message is simple: "I am strong. Don't try it." 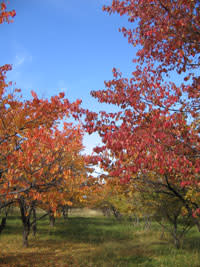 During winter, trees withdraw the green chlorophyll from their leaves, and textbooks typically say that autumn colours are produced by the pigments that are left behind. That's certainly true of yellows and oranges, but reds and purples are a different story.

They are the result of pigments called anthocyanins, which trees have to actively make. That uses up energy, which is lost to the tree when the leaf falls. An investment like that implies a purpose, and that's what scientists have been trying to uncover.

Shortly before he died in 2000, the great William Hamilton (he of kin selection fame) suggested that autumn colours are a warning to insects. Many species, such as aphids, lay eggs in trees during autumn and their larvae feed off their host when spring arrives. That's bad news for the tree, which defends itself with insecticidal poisons. Those that are particularly well-defended would benefit from advertising themselves as inhospitable hosts, and Hamilton suggested that they do this through red leaves.

Hamilton found some support for the idea - for example, he showed that trees that have the strongest autumn colours are also those that are plagued by the widest array of aphid pests. But his former student, Mario Archetti from the University of Oxford, has truly championed the theory and his latest findings provide the strongest support for it yet. They show that aphids avoid red-leaved apple trees, that they fare better on trees without them and that wild trees have far redder leaves than domesticated ones, which are less troubled by the challenges of insects.

During a week in October, Archetti counted the numbers of rosy apple aphids on 120 apple trees, which had either red, yellow or green leaves. On average, he found that the red trees were the least attractive hosts, drawing half as many aphids as the green trees, and a third as many as the yellow ones.

Of course, it's possible that green and yellow leaves simply appear more vibrant to aphids because of their particular brand of colour vision. But Archetti also found that the aphids who laid eggs on red-leaved trees were less successful at raising young than those who chose yellow or green ones. He deliberately placed females on different trees and counted the number of adult offspring in the spring. On the red trees, just 29% of the young survived to adulthood, around half as many as those that grew up on the yellow or green trees. This strongly suggests that aphids actively avoid red-leaved trees, and for good reason.

To test his theory further, Archetti compared autumn colours in wild and domesticated apple trees. Wild versions still have to fend off the insect pests, but domestic ones have been bred for centuries for taste and yield, regardless of their autumn hues. Their care and reproduction is largely controlled by humans and their success doesn't depend very much on their ability to ward off attacks from insects. With that evolutionary pressure lifted, you would expect domesticated apple trees to avoid the cost of producing expensive red pigments, and that's exactly the case.

Archetti tracked down wild trees in Kyrgyzstan and Kazakhstan and found that 62% of them turned red in the autumn, compared to just 3% of those in an English orchard. That's not just a reaction to different environments, for the same patterns apply in imported wild trees - in the US, 30% of wild Central Asian apple trees turn red compared to under 5% of local varieties.

But not all domesticated trees were equal. Archetti analysed data from the US Department of Agriculture's extensive database of all American apple varieties, and found that those whose leaves turn red score higher on scales of vigour than those which yellow or stay green. He also saw that trees that are more susceptible to fire blight - a bacterial disease transmitted by aphids and other insects - were more likely to turn red in autumn. 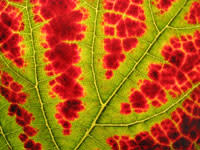 These observations provide even more support for the signalling theory, which predicts that the strongest signals will be used by the strongest individuals or those who have the greatest need forgetting their message across. That's exactly what Archetti found.

All in all, he has assembled an impressive body of evidence to support the signalling theory. Archetti's work has come under heavy criticism before, not least because some scientists claimed that aphids can't actually see red. Unlike humans, aphids lack light-sensitive cells that are tuned to red light - theirs are tuned to yellow, blue-green and ultraviolet. Nonetheless, Archetti teamed up with one of his critics to show that aphids could still tell the difference between red and green leaves based on how they reflect these other colours. And regardless, the proof is in their behaviour - they strongly prefer green leaves to red ones.

Critics of Archetti's work have their own favoured theory - that autumn colours act as a natural sunscreen. As the tree withdraws its chlorophyll from its leaves, there's a risk that sunlight striking the deserted leaves will damage them instead of providing energy for photosynthesis. This damage makes it more difficult for trees to reabsorb nutrients from the leaves. But the anthocyanins that give red leaves their colour provide protection against this damage.

Archetti believes that the evidence for this idea is inconsistent, and that it cannot explain why some trees turn red in autumn and others don't. He's currently writing a review to summarise the evidence for and against it. Nonetheless, he says that his study doesn't contradict the sunscreen idea, and the two processes may complement each other.

For the moment, he has given the signalling theory some impressive weight. And perhaps, it's not actually that surprising. After all, nature is replete with colourful warning signs, from the black and yellow coats of wasps, to the stunning garments of poison arrow frogs. Could the gorgeous colours of autumn be yet another example of just such a beautiful threat?