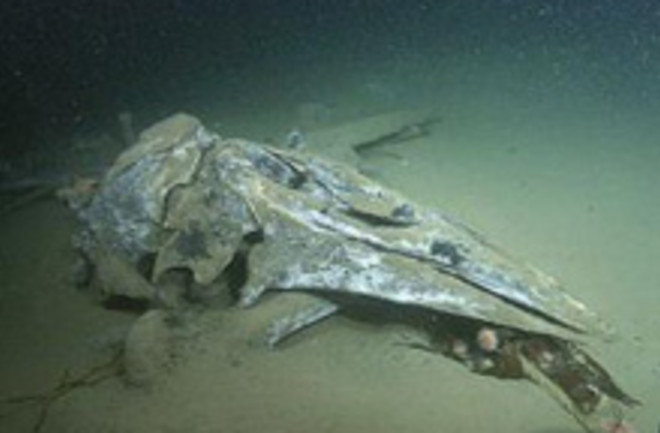 If ever a species got the disgusting name it deserved, bone-eating worms would be the one. Robert Vrijenhoek's team discovered them five years ago eating the bones of a dead gray whale off California, and since then they've shown up in whalebones around the world. The worms don't have mouths or anuses—instead, they rely on their bacteria to handle nutrient uptake and waste disposal. And according to a new study by Vrijenhoek in BMC Biology, there's more to these strange sea-dwelling scavengers: They might have been around since before whales even existed, and are probably more numerous than we thought. Back in 2004, Vrijenhoek's first analysis of the bone-eating worms, which carry the scientific name Osedax, found five different species. However, according to the genetic analysis he carried out in the new study, there could be as many as 17 distinct evolutionary lineages. Osedax is old, too. Using a molecular clock taken from shallow-water invertebrates, the researchers calculated that the bone worms could have split off from their nearest relatives 45 million years ago, about the time whales arose (and became meals for Osedax upon dying and sinking to the bottom). But if Vrijenhoek used a different clock, one designed for deep-sea worms, he found that the bone-eaters could date back 20 million years further, to a time before whales even existed. Scientists will have to look at fossils of ancient whales and their predecessors to figure out the history of bone-eating worms. But they already know these oddball sea creatures have a taste for more than whales. Vrijenhoek told Wired.com that he has offered cow, sea lion, and pig bones to Osedax, and the worms like them just fine. Related Content: Discoblog: New "Worm Charming" Champion Sets World Record Discoblog: Barry the Giant Sea Worm: Fantasy Turns Real in the U.K. Discoblog: Let Them Eat Dirt! It Contains Essential Worms DISCOVER: Weird Worms Feast on Whale BonesImage: MBARI