Are Darwin's Finches One Species or Many?

Darwin’s finches are icons of evolution, but scientists disagree about what exactly they represent. 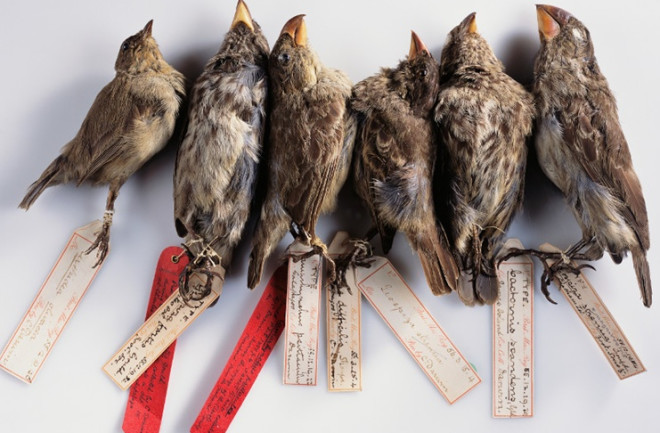 Finch specimens collected during the second voyage of the HMS Beagle in the 1830s. (The Trustees of the Natural History Museum, London)

The finches that Charles Darwin collected in the Galapagos Islands are considered textbook examples of how a single species differentiated into many to exploit different resources. Subtle changes in the size and structure of beaks among the six species of ground finches have been called “evolution caught in the act.” But are they really one species, or several? In Science Smackdown, we let experts argue both sides of the question.

The textbooks are wrong, says ornithologist Robert Zink of the University of Minnesota’s Bell Museum of Natural History. The ground finches may seem to be different species, at least with superficial comparison, but they’re stuck in what he calls Sisyphean evolution. “Species kind of get started, but . . . they never make it to the top of the hill,” Zink says.

In a recent paper in Biological Reviews, Zink helps make the case. “None of these ‘species’ are distinct,” he says. The various ground finches don’t differ significantly in ways that usually differentiate bird species, such as plumage patterns or song. Unlike with discrete species, these features aren’t stable and can vary over just a few generations, depending on weather and food availability. Sequences of their nuclear and mitochondrial DNA show little variation and none of the telltale signs that suggest distinct species.

The circumstances in the Galapagos — frequent interisland travel due to short distances between islands and interbreeding — prevent the finches from truly forming distinct species. It makes more sense to classify the birds as a single species of ground finch with ecologically driven variations, Zink says.

Princeton-based husband-and-wife evolutionary biologists Peter and Rosemary Grant disagree. They started studying finches in 1973 and have long held that ground finches represent “species before speciation is complete.” (In fact, that’s how they titled one of their papers.) It’s natural that the nascent species would show genetic resemblance, Peter Grant says. Nonetheless, the traditional view that the ground finches make up six species holds up on the basis of breeding behavior and songs.

“It makes no sense to us as biologists studying populations in nature to combine them all into one species,” says Grant. Despite rare hybridization, the finch populations remain behaviorally and morphologically distinct and, according to Grant, are on their way to becoming separate species.

[This article originally appeared in print as "Species Stuck in Neutral."]

A sampling of the differences among certain Galapagos finches. (Granger, NYC)
1 free article left
Want More? Get unlimited access for as low as $1.99/month
Subscribe