A recent surge of lightning strikes in the Arctic may be yet another indicator of rising global temperatures. 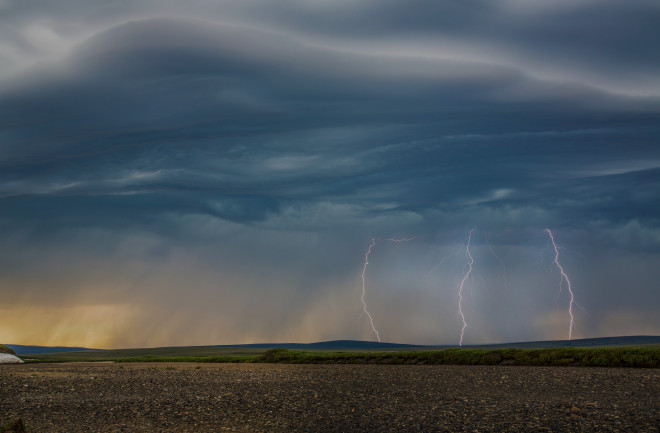 This article appeared in the January/February 2022 issue of Discover magazine as "Lightning Strikes in the Arctic." Become a subscriber for unlimited access to our archive.

In the frozen Arctic, lightning has long been shockingly rare. Typically, it’s a warm weather phenomenon — a steamy summer is the perfect breeding ground for the electric charge released during a bolt of lightning and a clap of thunder. Researchers now recognize lightning as another tool to understand our warming planet, as new data reveals that strikes in the Arctic have skyrocketed in the past decade.

For the past 17 years, global lightning strikes have been monitored in real time by the World Wide Lightning Location Network (WWLLN). This global grid of sensors is used to gather information about the frequency and distribution of lightning strikes. And the data collected so far show some startling changes to the Arctic region above 65°N. A study in Geophysical Research Letters — led by the director of the WWLLN, University of Washington’s Robert Holzworth — found that between 2010 and 2020, lightning strikes tripled across the Arctic. In 2019, lightning was even detected close to the North Pole.

The lightning strike rate in the Arctic has increased in lockstep with rising global temperatures; as our planet’s climate has warmed over the past decade, so has the frequency of lightning. “If any layer of the atmosphere where a storm is located is above freezing, the chance of lightning starts increasing,” says Michael Stock, a lightning scientist at Earth Networks who was not involved in the study. “What Dr. Holzworth has observed shows quite clearly that not only are the poles getting warmer, but the warming is also changing local weather patterns.”

The Global Climate Observing System now recognizes lightning as a “essential climate variable.” This means that understanding where — and when — lightning is striking across Earth can help illuminate our rapidly changing climate.