Humans invented the wheel over 5,000 years ago, but where it first originated is a mystery. 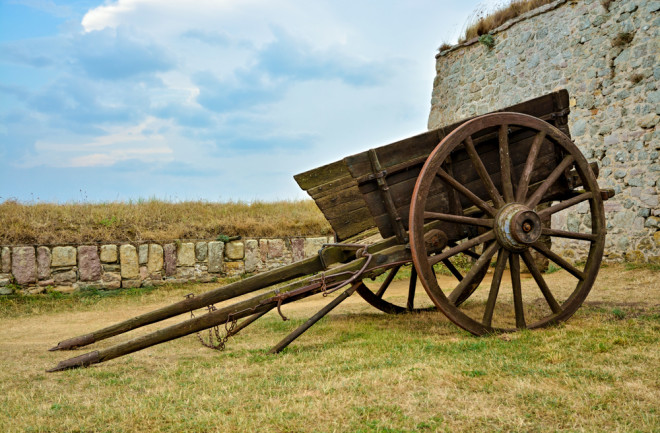 The first wheeled carts revolutionized society. But we may never know who actually invented the wheel. (Credit: Michal Stipek/Shutterstock)

Imagine liking your car so much you put its picture on a coffee cup. Or — to kick the gesture up several notches — how about being buried with your ride when you die?

Not many of us would decorate a mug with our wheels, let alone take them to the grave. But about 5,000 years ago, Bronze Age people did both, and those acts created some of the oldest surviving evidence for wheeled vehicles.

Thanks to these finds and others, scholars agree that the wheel was invented somewhere in Eurasia or the Middle East between 3000 and 3400 B.C. Once developed, the technology spread quickly, transforming society as it went. Carts and wagons eased the burden of daily tasks like hauling water, timber and food. They also allowed people to travel over land with relative ease, turning the continental plains into a throughway for trade, migration and cultural connections.

But while scholars can track these consequences of wheel technology, the precise origins of the pivotal innovation remain a mystery.

The wheel is the poster child for ancient ingenuity. Although reinventing the wheel is cliché, it is true that objects on rolling cylinders were invented more than once by different cultures. Ancient peoples in the Americas and Eurasia both crafted palm-sized clay figurines on wheels, which were probably toys or ritual items.

But when it comes to wheeled vehicles capable of transporting humans and supplies, the earliest evidence comes from Eurasia and the Middle East, roughly 5,400 years ago. By then, people in those regions had built cities and massive monuments; they mastered metallurgy and intensive agriculture. They also hauled loads using sleds, sledges and other such devices dragged on runners or rollers. It didn’t take a genius to realize that adding rotating cylinders to a sled would improve transport over dry land.

The Ljubljana Marshes wheel, found on Slovenia and dated to around between 5,100 and 5,300 years ago. It's currently the oldest wooden wheel ever discovered. (Credit: sporti/Wikimedia Commons)

So, why were wheeled vehicles a relatively late invention?

The design challenge was the wheel-and-axle interface, argues archaeologist David Anthony in his book The Horse, The Wheel, and Language. Wagon-makers had to carve axles that fit precisely through the center of wheels — snug enough so that wheels wouldn’t wobble, but loose enough to roll with minimal resistance. And the frame itself needed to be sturdy, yet not too heavy.

In engineering terms, the builders had to consider friction, strength, rigidity and the dimensions of several independent parts: the wheels, axles, body, draft poles and yoke or harness. It's no wonder it took so long to build this deceptively complex machine.

Evidence From Toys and Texts

People pulled off this engineering feat and began building animal-drawn carts (two wheels) and wagons (four wheels) by around 5,000 years ago in Eurasia and the Middle East. Our evidence for the first wheels comes in a variety of forms, including texts, pictures, miniature models and the remnants of actual vehicles.

In fact, wagons get a shoutout in some of the world’s earliest writing: about 3,900 clay tablets discovered in a 5,200-year-old temple in the Mesopotamian city of Uruk. Written in wedgelike proto-cuneiform, the inscriptions included the “wagon” sign three times. However, considering "sledge" appeared nearly 40 times, it seems wheeled vehicles were not yet common in Mesopotamia at this point.

Artistic renderings of vehicles show up on artifacts and buildings beginning about 5,400 years ago. For instance, at a Polish site, archaeologists recovered a clay mug with an incised image resembling a wagon and yoke. Animal-drawn carts seem to be depicted on a tomb in Germany and metal cauldron from Russia. Ancient people also made miniature models of wheels and vehicles. Some were found in graves, suggesting they held ritual significance. But it’s also possible the minis were toys.

A wheeled toy dating from the first millennium A.D., and belonging to the Remojadas tradition of Mexico and Central America. (Credit: Madman/Wikimedia Commons)

As for actual vehicles, archaeologists have unearthed the remains of more than 200 wagons and carts from burial mounds between 4,000 and 5,000 years old, dotting the grassy plains of Russia and Ukraine. Some of the graves also contain skeletons of draft animals, presumably sacrificed during funerary rites. In Europe, people did not seem to take their wagons to the grave. Still, parts of vehicles have survived by chance, such as a wooden wheel from a 5,100-year-old site in Slovenia.

Despite this evidence and decades of archaeological research, we don’t know precisely where the first wheeled vehicles were made.

In part, that’s because of the margin of uncertainty around radiocarbon dates. The method produces an age range such as 3100 to 3300 B.C., rather than a precise year like 3273 B.C. Radiocarbon dates for early wheels overlap from geographically far-flung sites, including ones in present-day Hungary, Iraq and Turkmenistan.

Plus, wheeled vehicles could have been invented more than once. Supporting this possibility, early examples differ technologically. Vehicles found in the East had fixed axles and rotating wheels, whereas ones discovered in Switzerland and Germany featured axles that also turned. This could mean cultures in the East and West independently came up with wheeled transport — or that one group borrowed the idea from another, but designed it differently.

Wherever wheeled vehicles were first conceived, it’s clear that the technology quickly spread, transforming lives. Imagine going from lugging your crop harvest down a hill to rolling it with ease. As Anthony put it, "It would be difficult to exaggerate the social and economic importance of the first wheeled transport.”

Arguably, the technology allowed for single-family farms. With wheels, a few people could do work that previously took many able bodies: transporting manure, supplies and crops over many acres. And for nomadic people, like herders, wheels would have been revolutionary. They could venture away from waterways and into open plains, towing their homes and possessions. Shrubby grasslands that were once inhospitable became highways for the movement of people and ideas.