Archaeologists Have Found Prehistoric Rock Structures Under the Great Lakes. Here's What the Stones Can Tell Us

A Doggerland of the Great Lakes? Underwater rock formations on the lakebed of Lake Michigan and Lake Huron may have been created by hunters thousands of years ago. 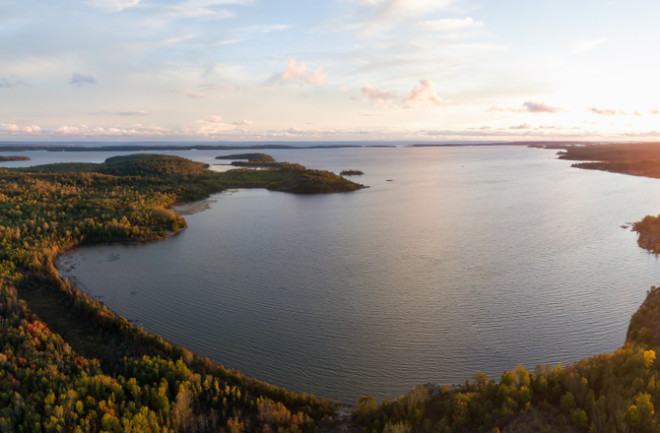 In 2007, underwater archeologist Mark Holley was scanning for shipwrecks on the bottom of Lake Michigan’s Grand Traverse Bay. Instead, he stumbled on a line of stones thought to be constructed by ancient humans — including one stone with what appeared to be a carving of a mastodon. The subsequent press conference generated excited headlines about a “Stonehenge-like structure” found under Lake Michigan.

But these sensationalized headlines are misleading: there’s no “henge” to the structure. The stones are small and arranged in a V-shape instead of a circle. Plus, the supposed-mastodon image hasn’t been analyzed to prove whether it’s a carving or a natural feature of the rock.

The real underwater stone sensation lies 120 feet below neighboring Lake Huron: an area the size of a football field with dozens of 9,000-year-old artifacts and human-built stone structures that comprise the most complex prehistoric hunting structure ever found beneath the Great Lakes.

“It’s a Pompeii-type situation. Everything is totally preserved in cold, clear freshwater. You don’t get that often in archaeology,” says John O’Shea, an anthropology professor at the University of Michigan, Ann Arbor, who has led the research on underwater sites in Lake Huron.

These underwater antiquities give us a glimpse of how prehistoric human communities worked together to find meat.

When these stone structures were built, great sheets of glacial ice extended south from the North Pole, and water levels were much lower than they are today. The depth of the Great Lakes was up to 300 feet below modern levels, exposing miles more land than we currently see.

Those exposed shorelines were productive, full of wildlife and plants that attracted hungry humans. Early hunting communities likely targeted migrating caribou in particular, a species that’s adapted to cold climates and is (and was) “very predictable,” according to O’Shea.

Each spring and summer, caribou migrated across a narrow strip of land called the Alpena-Amberley Ridge, which stretched diagonally across Lake Huron, connecting modern-day northeast Michigan to southern Ontario.

“This land bridge was only two to 10 miles wide, giving a huge advantage to early hunters looking to ambush animals,” says O’Shea.

Like deer and elk, caribou follow linear features and don’t like to step over a line of brush or stone. Early humans capitalized on this by constructing two long, converging stone lines that narrowed to a choke point. At the convergence to the two lines, hunters hid behind big boulders, ready to kill the migrating caribou.

O’Shea and his colleagues have found these stone lines and hunting blinds on the Alpena-Amberley Ridge beneath Lake Huron, most notably in a 300-foot-long ambush area called the Drop 45 Drive Lane. Because the artifacts are so deep, they haven’t been affected by waves and ice or covered by sand and algae.

“I’ve seen campfire rings with charcoal still inside them, stone tools, and even rings that were used to stake down the edges of a tent or tipi,” says O’Shea, who is also an expert scuba diver.

Similar hunting structures have been found throughout North America, particularly closer to the Arctic where they were used more recently by traditional native hunters.

“Comparing the Lake Huron structures to similar hunting techniques around the world gives us a clearer picture of how these rocks might have been used,” says Hans VanSumeren, a marine technology professor and the director of the Great Lakes Water Study Institute at Northwestern Michigan College.

The underwater artifacts and stone structures were carefully vetted to determine whether they were natural or human-made. First, teams use remote sonar mapping to find potential archaeological sites, then they deploy remotely operated vehicles (ROVs) for more detailed investigations, or send down divers to recover samples for further testing.

Back to the media-hyped “Stonehenge” Holley found in Lake Michigan: It might be a small version of a prehistoric hunting structure, similar to the one found in Lake Huron. As for why it was falsely labeled in headlines, VanSumeren says that a hunting blind underwater “doesn’t have the same ring to it” as an internationally recognized prehistoric structure like Stonehenge.

“There’s clearly a lot of rocks there. But the jury’s out on whether it was intentional construction,” says O’Shea, who dove to the site several years ago with Holley.

Unlike the Caribbean-clear deep water where the Drop 45 Drive Lane was discovered in Lake Huron, the shallow rocks Holley found in Grand Traverse Bay were 35 feet underwater. They are coated in algae, sediment, and invasive mussels, making it difficult to determine if the rocks are natural or human-built. O’Shea hopes Holley will submit his findings for peer-review, which he calls “the gold standard” for scientists.

“You need to produce the receipts to convince people that what you have is real,” says O’Shea, “especially if you’re working underwater where most people can’t go.”