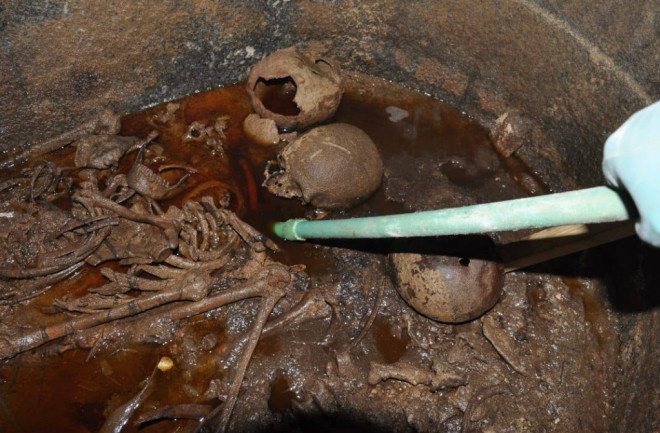 The granite coffin revealed three skeletons floating in sewer water. (Courtesy of the Ministry of Antiquities) Since the announcement of its discovery earlier this month, the buried sarcophagus in Alexandria, Egypt, created a lot of speculation about who might be inside. Given the coffin’s large size and composition of granite, which would have had to be mined hundreds of miles away, experts said it was possible the coffin contained a man of importance, perhaps a nobleman of Alexander the Great. There was also a lot of online chatter about the possibility of unleashing a curse by opening the presumed 2,000-year-old coffin. Initially the plan was to excavate the sarcophagus over days and open it at a museum, where its lid would be pried open. But humankind, known for climbing mountains because they are there, is a curious bunch. The granite coffin was opened Thursday, July 19, at the construction site where it was discovered.

Archaeologists prepare to open the sarcophagus discovered during a construction survey in Alexandria this year. (Courtesy of the Ministry of Antiquities)Its contents may not have been as anti-climatic as Geraldo Rivera’s opening of Al Capone’s vault in 1986. But it’s safe to say expectations were higher. Inside were three disarticulated skeletons floating in sewer water, said archaeologist Shaaban Abdul on the Ministry of Antiquities’ Facebook page. The remains likely are of military officers or soldiers, the dates they lived to be determined. One of the men appears to have been struck by an arrow in the head, Abdul said. The remains have been taken to the Alexandria National Museum for further study.