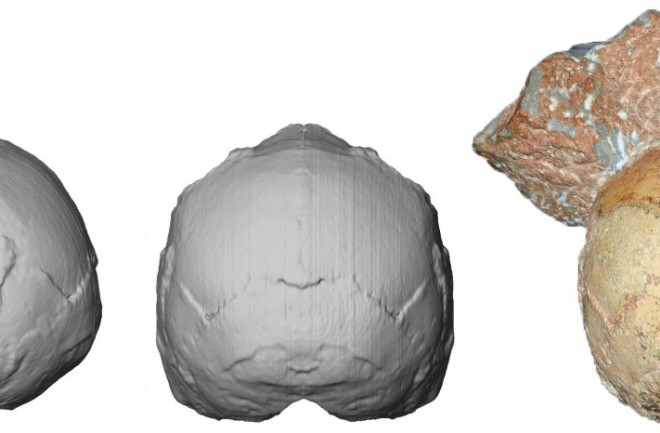 The skull fragment known as Apidima 1 (right) is about 210,000 years old, according to a new analysis. Seen from the rear (middle) and side (left) in a reconstruction, the partial skull’s rounded shape shares a unique feature of modern humans. (Credit: Katerina Harvati, Eberhard Karls University of Tübingen)

A scrap of skullcap collected in 1978 and stored for decades in an Athens museum may rewrite the timeline of our species leaving our ancestral African homeland.

A new analysis of the Apidima 1 fossil, named for the Greek cave where it was found, suggests it’s 210,000 years old, which would make it the oldest evidence of Homo sapiens outside Africa.

The find comes just a year after a separate team announced that a partial jaw from Misliya, Israel, was 177,000 to 194,000 years old. Along with 120,000-year-old fossils from China and elsewhere, the Misliya-1 specimen challenged the long-held notion that our species did not leave Africa until about 60,000 years ago.

In fact, for decades, most paleoanthropologists believed H. sapiens emerged only 100,000-200,000 years ago. Finds such as Misliya-1 and even older fossils from Jebel Irhoud in Morocco, dated to about 300,000 years ago, have kicked that notion to the curb in the last few years.

Which brings us to Apidima 1. All that’s preserved is a fragment from the back of the individual’s skull, so researchers have no information about facial features. However, the piece they do have is telling. We have a uniquely rounded shape to the back of our heads — and so does Apidima 1.

The feature, along with more subtle anatomical traits, led researchers to classify Apidima 1 as H. sapiens despite the fragmentary nature of the find. That makes it the oldest European fossil of our species by about 160,000 years.

The rounded back of a Homo sapiens skull (left) compared with that of our close evolutionary sibling, Homo neanderthalensis. (Credit: Wikimedia Commons)

Previous dating suggested Apidima 2 was about 160,000 years old. However, the new analysis places it at 170,000 years old. Similarly, researchers in the past had classified Apidima 2 as either early Neanderthal or Homo heidelbergensis, an older member of our family tree.

Some of the difficulty studying Apidima 2 arose from the distorted and fragmentary nature of the fossil, so the new study used a 3D reconstruction to visualize the partial skull as never before.

Based on the reconstruction and comparisons with other hominin fossils, the team determined that Apidima 2 appears to belong to a Neanderthal.

Found close to Apidima 1, the Apidima 2 cranium (right; reconstruction at left) is considerably younger at 170,000 years old. Based on multiple anatomical features, the researchers determined it is Neanderthal. (Credit: Katerina Harvati, Eberhard Karls University of Tübingen)

Because Apidima 2 is much more complete than Apidima 1, most earlier research focused on the better-preserved specimen. Since the two fossils were found in close proximity, those same studies assumed that the skull fragments belonged to the same species and were of the same age.

According to co-author Rainer Grün, speaking at a press conference ahead of the paper’s publication, that research failed to take into account the location of the fossils: in a jumbled pile of material that had washed through a cave system.

“It’s a fantastic coincidence that you have two skulls together, 30 centimeters apart,” said Grün, adding that preserved chemical signatures in the bones are unique to each fossil. “Isotopically they’re quite different. Apidima 1 must have come from quite a different environment.”

A Rock And A Hard Place

Grün cited the different isotopic signatures when defending his analysis of Apidima 1’s age. Some researchers not involved in the study have raised concerns that the raw dating results from Apidima 1 suggested a wider age range, and that the skull fragment may be considerably younger than 210,000 years.

Grün explained that he had ruled out a more recent age because the samples suggesting it had a different signature than the skull fragment samples. The issue goes back to the chaotic nature of the site, where material from different locations and ages piled up over millennia.

Over time, all the debris cemented together into what’s called breccia. Fossils preserved in breccia are notoriously difficult to prepare for study because it’s tough to free the bones from the hard rock without damaging them.

Although Uranium series dating, used here, requires the destruction of a very small piece of fossil — a mere fraction of a millimeter — the researchers were unable to sample the specimens directly. Instead they took material from bone fragments either in the surrounding breccia or accidentally chipped off the partial skulls as they were being prepared several years ago.

During the press conference, lead author Katerina Harvati said the team would attempt to extract DNA from the fossils, but that she was not optimistic about finding any. The collection and sequencing of ancient DNA is still challenging, in part because the genetic material survives only under optimal conditions.

Harvati said the team is also investigating the possibility of extracting ancient proteins that may provide additional clues to the individual’s lineage. This recently developed line of research, called paleoproteomics, has tremendous potential, but it’s unclear whether Apidima 1 has any salvageable material to extract.