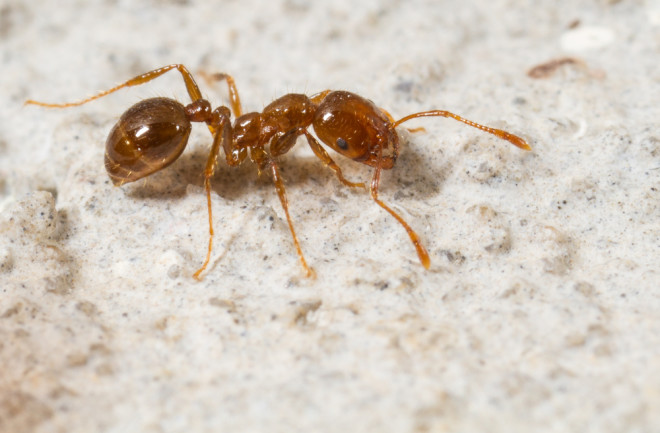 A group of tawny crazy ants (Nylanderia fulva), upstart newcomers to the southern United States from South America, was trying to steal food — dead crickets — from hundreds of red imported fire ants (Solenopsis invicta). The red fire ants, also originally from South America but common throughout the southern U.S. for almost a century, have venom so deadly that other ants rarely dare to attack them. “[It] looked like suicide,” says LeBrun.

But LeBrun soon realized the crazy ants had a plan. Whenever they were exposed to fire ant venom, the crazy ants stepped aside to perform an elaborate grooming act. The ants curled up, smearing themselves with a secretion coming from the acidopore, an opening in the abdomen that secretes venom as well as other fluids. The act appeared to neutralize the fire ant venom, allowing the crazy ants to return to — and win — the battle.

Naming this act “detoxification behavior,” LeBrun and his colleagues at the University of Texas at Austin’s Brackenridge Field Laboratory set up experiments to see if something in those acidopore secretions really could detoxify fire ant venom. In the lab, they sealed the crazy ants’ acidopores with nail polish before pitting them against fire ants. This time, the crazy ants succumbed to the fire ant venom.

But one question remained: Was it the crazy ants’ own venom that worked as a detoxifier, or some other secretion from its acidopore? To find out, the researchers applied fire ant venom to a third ant species and then treated them with either crazy ant venom or another acidopore secretion. The venom — specifically its formic acid component — proved to be the key to neutralizing fire ant venom. The crazy ant’s never-before-seen ability to counteract a rival’s venom is likely a big factor in their spread along the Gulf Coast in recent years.