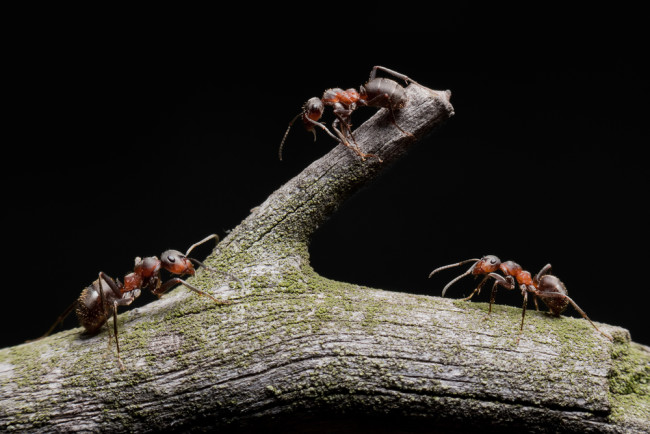 Humans aren’t the only beings to reach for the medicine cabinet when they get sick. It turns out animals large and small know what it takes to cure what ails them. Ants are the latest non-humans to make it on the list of self-medicating creatures, after researchers in Finland observed them ingesting hydrogen peroxide to cure their fungal infections. Though scientists have hypothesized ants and other insects fight infections by ingesting therapeutic substances, it’s now safe to say, conclusively, that they do.

Beauveria bassiana is a fungus that grows in the soil and acts as a deadly parasite on a number of insect species. When spores from the fungus come in contact with an insect’s body they germinate and penetrate the cuticle (the insect equivalent of the skin), killing the bug within days. One of the cures for the fungus is to ingest hydrogen peroxide, which can be found naturally in aphids and the decaying bodies of dead ants. For ants, hydrogen peroxide is fatal, but when placed between a rock and a hard place, scientists found they’ll drink the substance to cure themselves, New Scientist reports. Researchers fed one group of healthy ants a honey-based solution diet. A different group of ants feasted on the same solution, but spiked with hydrogen peroxide. The ants fed the spiked meals had a mortality rate of 20 percent, as compared to 5 percent for ants that at the pure solution. Then, researchers repeated the same experiment, but this time the ants were infected with the fungus. The roles reversed: the death rate for the group fed plain honey was 60 percent, but for those fed hydrogen peroxide that dropped to 45 percent.

Writing Their Own Prescription

Finally, researchers allowed ants to choose between a meal of pure honey solution, or a meal spiked with hydrogen peroxide. Healthy ants stayed away from the spiked meal, while infected ants carefully supplemented their diet with doses of the spiked food. When the concentration of hydrogen peroxide was higher, sick ants consumed smaller doses than when the solution was weaker. Therefore, scientists concluded that ants were intentionally medicating, and they knew how much “medicine” they needed. Researchers published their findings in the journal Evolution.

Welcome to the Club

It now appears that it’s not a question of if other creatures in the animal kingdom self-medicate but how. There’s an increasing body of evidence showing animals of all types write up prescriptions when they’re sick. Chimpanzees consume juices from the bark of a poisonous plant to kill harmful parasites in their system. The Chinese lesser civet eats whole leaves to sweep out parasitic worms in its intestines, while goats consume tannins to alleviate stomach infections. Even fruit fly moms medicate their babies with alcohol to protect them from hungry wasps. There’s little doubt that as scientists continue their work, they’ll come across other animals that have their own twist on a cure.