Antarctic Fish Live With Ice In Their Veins Year-Round 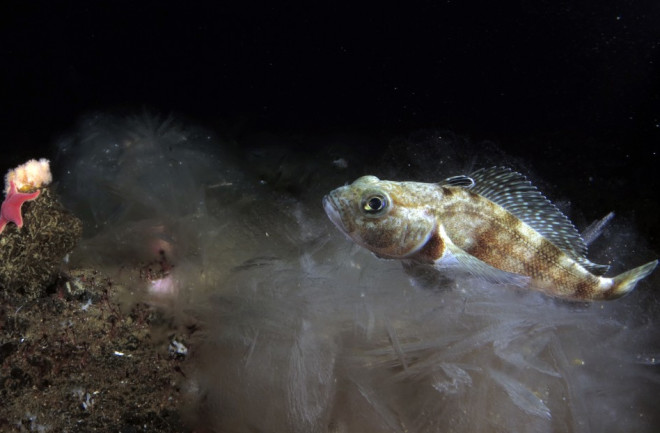 Nototheniod fish swims at McMurdo Sound. Photo: Paul Cziko courtesy University of Oregon Native fish species that brave the frigid waters of the Antarctic have ice in their blood, literally. To survive in the coldest climate on Earth, Antarctic notothenioid fish have specialized anti-freeze proteins in their blood that bind to ice crystals and inhibit their growth, keeping these fish from turning into fishcicles. Paradoxically, however, a new study finds that these same proteins also prevent ice crystals from melting, leading to a buildup of ice in fishes' veins that persists year-round and could be harmful to their health.

Superheated Ice In Their Veins

That many Antarctic fish species have ice in their veins is well known, but what isn’t known is how they eliminate those tiny crystals. During the cold winter months, crystals accumulate in the fishes’ spleens, but researchers in the current study hypothesized that they melted away in warmer summer waters. To test their theory, researchers retrieved several species of fish from the winter waters of McMurdo Sound in Antarctica and brought them back to the lab for testing. They warmed the fishes’ bodies to temperatures that exceeded the expected melting point of ice in their blood, but some crystals still remained inside their bodies. Thus, the ice was superheated, or able to stay solid above its melting point. Specifically, ice remained solid in fish 1.8 degrees past its expected melting point of 30 degrees Fahrenheit.  When they analyzed serums from several fish under the microscope, they determined that the same protein that kept ice crystals from growing also prevented them from melting.

Where Do The Crystals Go?

Next, researchers caught fish during the summer at McMurdo Sound, and 90 percent of these fish still had ice crystals in their blood stream despite warmer water temperatures. After examining McMurdo Sound water temperature data stretching back more than a decade, researchers found that it's rarely warm enough to melt the superheated ice crystals in Antarctic fish species. Therefore, researchers concluded, these fish retain ice in their blood for most of their lives. They published their results this week in Proceedings of the National Academy of Sciences.

Ice crystals getting lodged in tissues and organs can cause detrimental inflammatory responses and block narrow capillaries — similar to the way asbestos ravages the lungs in humans. At this point, researchers aren’t sure if Antarctic fish species experience any specific adverse health effects for icy blood. However, they do believe these fish must have evolved adaptations to protect themselves from ice accumulation, such as corralling the crystals in the spleen. Regardless, it’s certainly an interesting evolutionary tale: The very adaptation that allows these fish to survive in freezing water must have required other adaptations to keep from killing them.