Another Reason To Act Now On Climate Change: Snakes 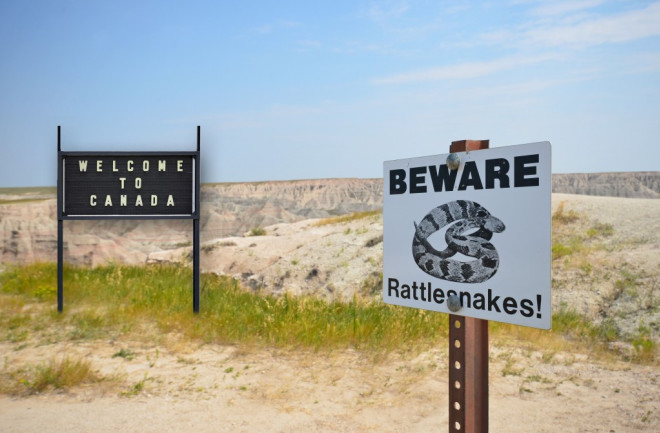 Though scientists have been warning about the disastrous impacts that climate change will have on our planet for decades, we are now starting to feel those predictions manifest. As Eric Holthaus pointed out, the "worst nightmare" scenarios are already happening. Droughts, storms, fires, you name it—the world as we knew it is under siege. Heck, we just had the most abnormally hot month on record; February 2016 was 1.35 degrees Celsius warmer than the average, making it two-tenths of a degree more unusually warm than the previous record month: January 2016. And as water supplies dwindle, rainforests burn, and corals bleach, we may have yet another thing to worry about: frickin' snakes. Some parts of the world know all too well the danger posed by venomous snakes. Scientists estimate that anywhere between 421,000 and over 1.8 million envenomations from snakes occur every year, with as many 94,000 deaths. Here in the United States, we're fairly lucky: we have less than ten deaths per year. Meanwhile, our neighbors to the south are plagued by serpentine foes which cause a few thousand deaths annually. But as our climate changes, so, too, will the habitats that these snakes call home. And with those changes comes the potential for species to expand their ranges and come in contact with people they never would have before. To determine what might happen to American snakes under different climate change scenarios, scientists from the Universidad Nacional Autónoma de México's Laboratorio de Biología de la Conservación and the University of Kansas Biodiversity Institute used climate and habitat (niche) models to predict how the distributions of 90 species of snakes—about half the total number of venomous species in all of North and South America—will react to changes in climate. They then used current occurrence and bite data to estimate how snakebite risk will change as the snakes move around. The results, published this year in the journal Climatic Change, were unnerving: the team predicts that snakebite risk may rise with temperatures, especially in remote, rural areas.

Summary of the predicted range change predicted by different models under the worst climate change scenario, from Yañez-Arenas et al. 2016, supplementary info. Almost all of the North American snakes were predicted to expand in range. Some of the worst-case-scenario projections have species like timber or western rattlesnakes (Crotalus horridus and C. oreganus) reaching up into Canada. South American snakes were more split, with about half of them reducing their ranges rather than expanding them in most of the climate change scenarios. Species-specific effects aside, the team predicted an overall increase in snakebite risk could occur as little as a few decades. And this is just considering venomous snakes in a part of the world where these animals are relatively benign—it will be interesting to see if the trend holds true in Africa and Asia, where even a small percentage increase in snakebites could lead to hundreds of thousands of deaths.

Shifting snakebite risk with climate change; figure adapted from Yañez Arenas et al. 2016 However, it's important to note that these results contrast a previous study which found that rattlesnakes may be nearly wiped out due to rapidly changing temperatures. While this team used more variables to predict habitat, it's possible that the numbers are still an overestimate for some species. Either way, there's little doubt that the carbon dioxide and other greenhouse gasses we have emitted will have lasting impacts on life on this planet. Climate change isn't just about weather patterns or global temperatures—all species are affected by our actions, including those that can do us grave harm. But while these results are a little scary, they're also not set in stone: rather than worrying about snakes, we should do our best to reduce our climactic impacts now while we still can. Citation: Yañez-Arenas, Carlos, et al. "Mapping current and future potential snakebite risk in the new world." Climatic Change (2016); 134, 4, 697-711. doi: 10.1007/s10584-015-1544-6