Many animals use impressive displays to seduce a mate, but few go as far as the male Anna's hummingbird. He performs a death-defying courtship dive, plummeting to the ground at speeds and accelerations that put jet fighters to shame. 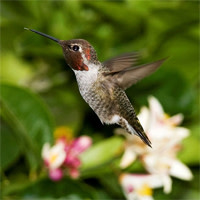 The tiny 7cm bird reaches a top speed of 60mph and at the fastest point of the dive, it covers 385 times its own body length every second. For its size, it's the fastest aerial manoeuvre performed by any bird. In contrast, the famous attack dive of the peregrine falcon, while much faster in absolute terms, only covers 200 body lengths per second.

Christopher Clark from the University of California in Berkeley filmed diving Anna's hummingbirds using six high-speed or high-definition video cameras stationed around California's East Shore State Park. He baited the males with a stuffed female and filmed their attempts to woo her through stunt-flying. All in all, he managed to record 26 separate dives. 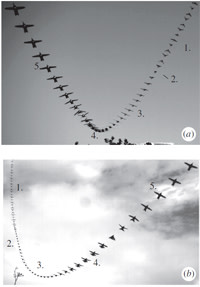 In each one, the male powers the dive by pointing earthwards and flapping his wings 55 times per second. Once he's picked up some speed, he tucks his wings in only to pull out of the death-defying descent at the last minute by abruptly spreading his tail feathers.

Clark found that pulling up this quickly subjects the bird to G-forces that are nearly 10 times greater than the force of gravity. These break the record for any aerobatic manoeuvre by a living creature, with the sole exception of jet fighter pilots. For these human flyers, accelerations of over 7g can cause blackouts and temporary blindness as the blood rushes away from their brain, but usually only for manoeuvres that last for a second or more.

The hummingbird copes with that potentially fatal problem by ensuring that its peak of acceleration is much shorter, lasting for mere fractions of a second. Its network of blood vessels also contains relatively shorter columns of fluid, which are less sensitive to drastic changes in acceleration.

Clark thinks that one of the key limiting factors to the hummingbird's already impressive dive is the strength of its chest muscles. The acceleration that it experiences when it pulls up puts a massive amount of pressure on its wings and shoulder joints. Its needs to push back with its chest muscles to stop its wings from ripping right off and Clark estimates that they are already at their limit.

The motive behind this extreme performance is (what else?) sex. It's part of an attempt to woo a female through song. Last year, Clark found that as the male spreads his tail at the bottom of the dive, air vibrating through the outer feathers produces a loud burst of song like a chirp. The tail feathers act like the reeds of a woodwind instrument and this acoustic stunt-flying could explain why Anna's hummingbird dives in the first place.

The noise that its makes gets louder the faster the air rushes through its tail. In horizontal flight, it can only move at speeds of 33mph or 215 body lengths per second. Diving allows it to travel much faster, making its sexy tail whistles sound as loud as possible. A desire for volume fuels its need for speed.

Only the fittest males can cope with the physical challenge of such a stunt, and only they can produce the loudest trills. There is no way to cheat with this display - it's an honest reflection of the power of the male in question. In this way, sexual selection has pushed the display of this species to its absolute physical edge Clark suggests that such displays are fertile ground for researching the limits of animal performance.