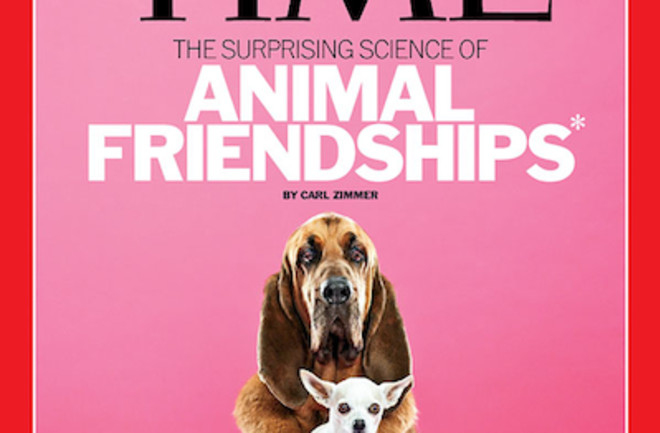 I've got a story on the cover of the latest issue of Time. It's about the evolutionary origins of friendship. For a number of scientists, friendship--in a deep sense of the word--is not limited to our own species. The fact that friendship may be a widespread biological phenomenon could help us better understand why it has such a positive effect on our own health. If you're interested in the scientific literature, the best way in--and the way I first started to get familiar with it--is this review in the latest issue of Annual Review of Psychology by Dorothy Cheney and Robert Seyfarth, two of the world's leading primatologists. One thing that I delve into in the story is the question of just how widespread animal friendship really is. We don't know, in large part because scientists haven't done that many long-term field studies on wild animals. When scientists do watch dolphins or baboons for decades, they can see some bonds between unrelated individuals that last for long stretches. (Yet another value that comes from slow-cooked science.) On the other hand, what may look like friendship may just be anthropomorphic projection. In the article, I explain that a lot of cross-species "friendships" may be nothing like the kind seen in, say, chimpanzees. (As for the adorable dogs are on this week's cover of Time, I note that the evidence about man's best "friend" is quite thin.) My story is behind a paywall, so you'll need to subscribe or pick up a copy at a news stand. For a sense of the piece, here are the first few paragraphs-- Since 1995, John Mitani, a primatologist at the University of Michigan, has been going to Uganda to study 160 chimpanzees that live in the forests of Kibale National Park. Seventeen years is a long time to spend watching wild animals, and after a while it’s rare to see truly new behavior. That’s why Mitani loves to tell the tale of a pair of older males in the Kibale group that the researchers named Hare and Ellington. Hare and Ellington weren’t related, yet when they went on hunting trips with other males, they’d share prey with each other rather than compete for it. If Ellington reached out a hand, Hare would give him a piece of meat. If one of them got into a fight, the other would back him up. Hare and Ellington would spend entire days traveling through the forest together. Sometimes they’d be side by side. Other times, they’d be 100 yards apart, staying in touch through the foliage with loud, hooting calls. “They’d always be yakking at each other,” says Mitani.Their friendship—for that’s what Mitani calls it—lasted until Ellington’s death in 2002. What happened next was striking and sad. For all the years that Mitani had followed him, Hare had been a sociable, high-ranking ape. But when Ellington died, Hare went through a sudden change. “He dropped out,” says Mitani. “He just didn’t want to be with anybody for several weeks. He seemed to go into mourning.”