Scientists beamed a laser pulse from a helicopter to map a long-lost metropolis. 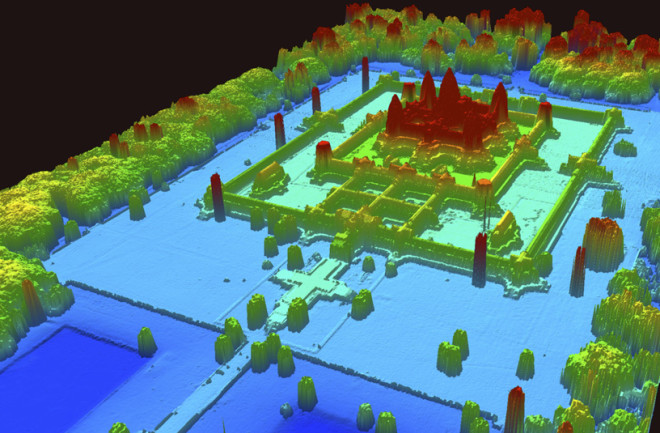 For 20 hours in spring 2012, a red helicopter crisscrossed northwest Cambodia, flying over one of the world’s greatest archaeological sites: Angkor, the onetime heart of Southeast Asia’s Khmer Empire. A team led by archaeologist Damian Evans beamed a laser pulse 200,000 times per second from the helicopter toward the dense forest below. They hoped a few pulses would slip through tiny gaps in the lush canopy and, by bouncing off objects and earth, send back secrets from a long-lost metropolis. It worked. By calculating the precise distance of each split-second journey, Evans and his team captured the remarkably orderly contours of long-hidden cityscapes. The work has revealed never-before-seen footprints of ancient roads, canals, ponds, field walls, occupation mounds and other facets of urban life in the heyday of the Khmer Empire.

Before the arrival of airborne laser scanning technology known as lidar (for light detection and ranging), archaeologists working in Angkor had to hack through thick jungle or painstakingly analyze aerial photos and satellite images — essentially guessing at what was beneath the dense canopy. Lidar has revolutionized tropical archaeology in Mesoamerica in recent years, but this is the first time the technique has been used in Asia. “Almost within minutes of receiving the data, we clicked a few buttons, and millions of data points coalesced into cities in front of us,” says Damian Evans of the University of Sydney, Australia, who spearheaded the $250,000 lidar mission. “We were all a little bit speechless.”

The implications of the work are profound. It establishes the full scale and sprawling suburban nature of Angkor, where the largest urban settlement of the preindustrial world began clattering to life in the ninth century. Scholars already knew that one of the largest religious monuments ever built — the pinnacled sandstone temple Angkor Wat — rose from the region’s central floodplains in the 12th century and that a complex water management system snaked through its soil. But the medieval metropolis all but vanished around the 15th century. Since at least the 1930s, archaeologists have been trying to piece together the story of Angkor’s cities and understand their role in the collapse of the Khmer Empire.

Although masonry used for great temples like Angkor Wat has survived the centuries, the wood, thatch and soil used to build the infrastructure of secular life largely succumbed to the appetites of a tropical climate. As a result, Evans says, the extent of Angkor’s urban and agricultural development has been “dramatically underestimated” — until now. “What we can now see is not only [a] vast, dispersed urban sprawl, but also this incredibly dense downtown area surrounding the temples,” he says.